Cassidy Duquaine – Stage Manager
Q: What are your duties as a stage manager?
A: Basically, as a stage manager, you are in charge of everything that goes on behind the scenes and you are involved from the start to the end. The stage manager is the go-between person and oversees the cast, the crew and the entire production.

Q: What’s the hardest part about combining the acting and design world together when it comes to tech week?
Tech week is definitely the roughest week of any show. There are tons of complications when adding in [tech] to the equation: timing issues, costume changes, making sure the lights go up at the right time, etc. It’s a difficult process and it can certainly be stressful, but after enough rehearsals it ends up running smoothly and coming together for a great opening night. 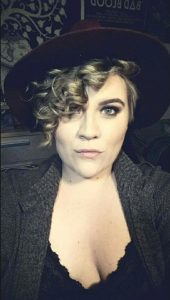 Griffyn Albers – Costume/Makeup Design
Q: What are your duties as a costume/makeup designer?
A: After Kathleen Donnelly (head costume designer) gives me visible or verbal research for the show, she lets me go forth alone. I basically am Kathleen’s right-hand man and I do whatever she needs to be done for pre-show preparation and during the show run.

Q: What’s best part about working in theatre design?
A: The best part is the versatility I get as a theatre major. I love the behind-the-scenes work because there are so many more moving parts involved that people wouldn’t normally assume.

Q: What’s the hardest part about combining the acting and design world together when it comes to tech week?
A: Honestly the hardest part is just making sure the tech crew, actors, designers and director are all on the same page. We have dry tech with just the technical side of everything being put together, but the fun comes in the next day at wet tech when the actors come into play.
Q: How does it feel to see your work on stage?
A: Exhilarating. 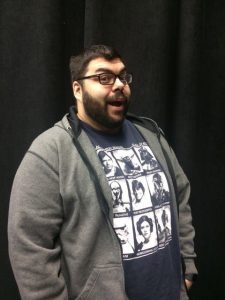 Anthony Montalvo – Sound Board Operator
Q: What’s it like watching rehearsals and then watching the show with an audience?
A: Rehearsal week is very long. I see the play four times before it opens and you’d think that I’d hate it by open, but I don’t. It makes it better because you know what’s coming so you get to see what other people’s reactions are.

Q: What’s the hardest part about merging the tech world and the acting world?
A: I wouldn’t say that it’s hard. Having knowledge of one makes the other job go a lot easier.

Q: What’s the best part about working crew?
A: The best part is the people who are working crew with you, and being on headset with those people. Making jokes, talking about classes, and so on and so forth. The crew works hard but also has a lot of fun.

Q: What’s your favorite show that you’ve worked crew on? Why?
A: My favorite show would have to be “Laughter on the 23rd Floor”. I saw it eight times and I laughed at the same jokes even time. 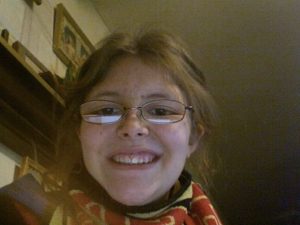 Daria Chirhart  – Props
Q: What are your duties as a prop designer?
A: I have plenty but the main four are doing research on the time period, designing the props that aren’t already made, finding props and, lastly, understanding what is needed on stage.

Q: What’s best part about working in theatre design?
A: It connects history to the stage. I really like having to know the time period of which the play is in.

Q: What’s the hardest part about combining the acting and design world together when it comes to tech week?
A: The hardest part comes to hand props because when designing them, I don’t have the actor/actress when I am working so sometimes it’s an estimate on the size.

Q: What has been the most challenging thing you’ve designed?
A: Emmy Awards because people know what they look like and so it has to look really close to the real thing.