Comedian focuses in on social issues 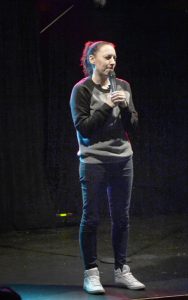 Galati performed in the Titan Underground in Reeve Memorial Union and said she had a good time.

“It was super fun,” Galati said. “It was really great; a great turn out with a crowd that’s ready to laugh.”

As a self-proclaimed feminist, Galati joked about prevalent social issues such as the wage gap. Galati also joked about different topics in politics such as the current presidential administration and Donald Trump. Overall, Galati kept the atmosphere in the room light-hearted with her humor.

The event was organized in part by Concerts and Comedy Chair of Reeve Union Board Jose Medina-Gonzalez. Medina-Gonzalez said he saw Galati at NACA (National Association for Campus Activities).

Medina-Gonzalez, along with other RUB members, went to the convention, saw Galati preview her work, then followed up by researching YouTube videos of her work to make sure the campus would enjoy her performance.

“I think that comedians in particular relieve stress in a really conducive and kind of funny environment obviously,” Medina-Gonzalez said. “So I think that it benefits the campus by giving you an outlet to forget everything for at least an hour or so and just really laugh and have a good time.”

There was a large turnout of students for the comedian, filling up almost all of the seats set up for the show.