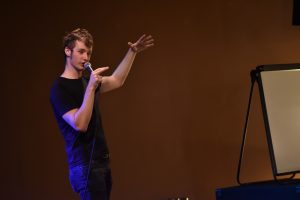 Coming off of a month-long tour in Oklahoma, McSpadden said it was a breath of fresh air coming to Wisconsin for the first time.

“All you Wisconsinites are so nice, you don’t even use real swear words, just gardening tools, all I hear is ‘Holy buckets!’” McSpadden said.

McSpadden went on tell the audience about the absurdly-priced Uber he took to get to Oshkosh from Milwaukee.

“I would have been a little more upset about the $140 fee if it weren’t for the insane stories my driver started to tell me after 20 minutes of complete silence,” McSpadden said. “Out of nowhere my driver starts telling stories about how he used to deal drugs. At that moment I closed out of Instagram and was all ears.”

McSpadden said he got his start in comedy when he was just a teenager in California.

“I started pursuing comedy when I was 16,” McSpadden said. “Once I got my learner’s permit, I would always sneak out of the house and go to open mic nights.”

Though McSpadden has been featured on both MTV and Comedy Central he still has comedic peers he admires and looks up to.
“My biggest inspiration has to be Patton Oswalt,” McSpadden said.

McSpadden’s show possessed a different nature compared to the typical and rehearsed bit-by-bit standup act, basing a lot of the night’s material on crowd interaction.

Freshman Aaron Dorsey said his favorite segment of the night was one based off that crowd interaction.

“My favorite bit was when he roasted voluntary crowd members,” Dorsey said. “Even though he was a little too much or overboard with some bits, I would see him again.”

McSpadden, despite all the jokes being thought up on the spot, had a sly and witty comment for just about every question he asked to members of the audience.

“You in the front right here, what’s your major?”

“Ah, marketing? That’s the major for all the business students that can’t do math, right?”

With McSpadden’s “no filter” kind of attitude, it seemed as if the crowd was almost scared to laugh during his opening bits, but by the middle of the show the audience warmed up to his style and howled with laughter until his closing joke.

With references to vaping, video games, relationships, sex and politics, nothing was left off the table during McSpadden’s act.

McSpadden opened up the last 15 minutes of his show to a Q&A with the audience to ensure that nothing was left unanswered.

“A lot of comedians tend to be more reserved, but McSpadden was open and did a great job interacting with the crowd,” Reich said.

When asked to give any advice to aspiring comedians, McSpadden said people will start to laugh eventually — just never give up.