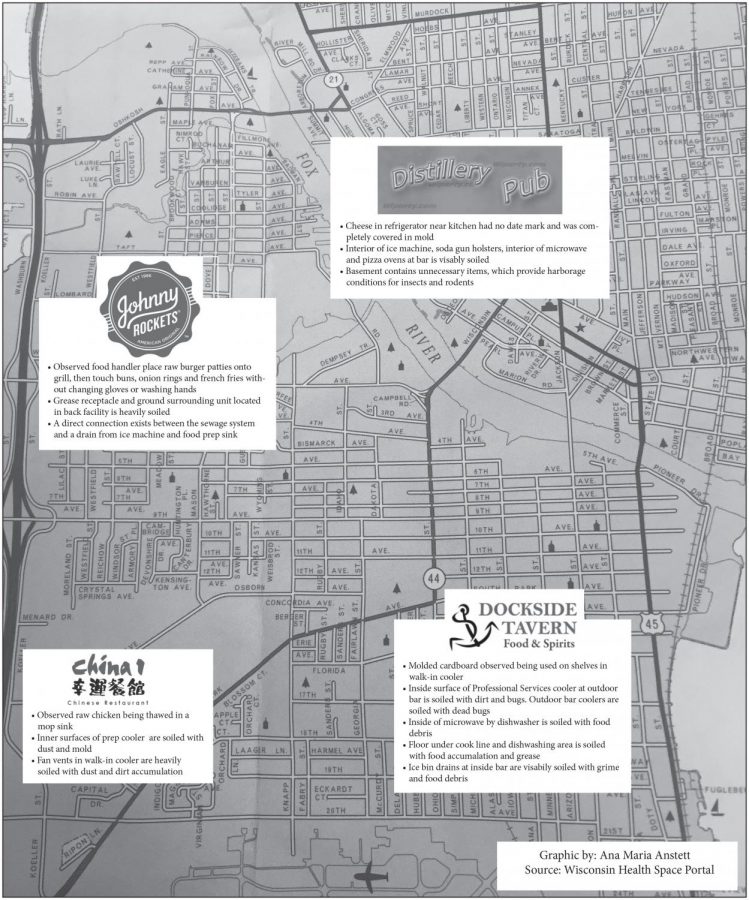 Restaurants in Oshkosh are subject to one unannounced health inspection per year by the Winnebago County Health Department, according to Environmental Health Supervisor.

The health department displays the official reports of each inspection on the Wisconsin Health Space Portal.

In the past, these reports were held by the restaurant owners and hard to obtain. Now, they are readily available to those who look.

Boyce said some of the establishments in the county have enough violations in their routine inspections to permit a follow-up, and in special cases, three visits will be made in one year.

“Those are restaurants and establishments that needs extra attention,” Boyce said.

Boyce said that even if a restaurant has numerous violations in its first, second or third inspection of the year, that may not warrant a closure.

“The failures that you are seeing are not life-safety issues,” Boyce said. “It takes quite a bit to close a restaurant; sewage backing up into the kitchen, no hot water, no water at all, those are all closures.”

While water is a vital part of any restaurant and sewage demands proper installation, Boyce said that vermin have to be taken into context.

“It is a big deal,” Boyce said. “But [an employee] can open up a backdoor to a restaurant while taking the garbage out and something can come in. Not saying that the place is dirty or unclean or anything like that. It can just be something as simple as a mouse running in.”

Boyce said that when inspectors see evidence of infestation, they will call pest control who will correct the situation.

Boyce said the Department does not keep track of how many restaurants are shut down or temporarily closed, but she can recall information based on her time with the Department.

“We have not shut anyone down permanently,” Boyce said. “We have had places shut down temporarily mainly due to a fire or no water available. This usually happens one-two places per year and they are reopened as soon as cleanup is completed and/or water is available for dish washing and hand washing.”

“We spend a lot of time on employee health and talking to the operator about food safety,” Boyce said. “That doesn’t show up on the inspection report, the teaching portion.”

According to the Winnebago County Health Department website, routine inspections are conducted during normal operation of the food service establishment and are normally unannounced. An inspection conducted on any given day may not be representative of the overall long-term operation of an establishment.