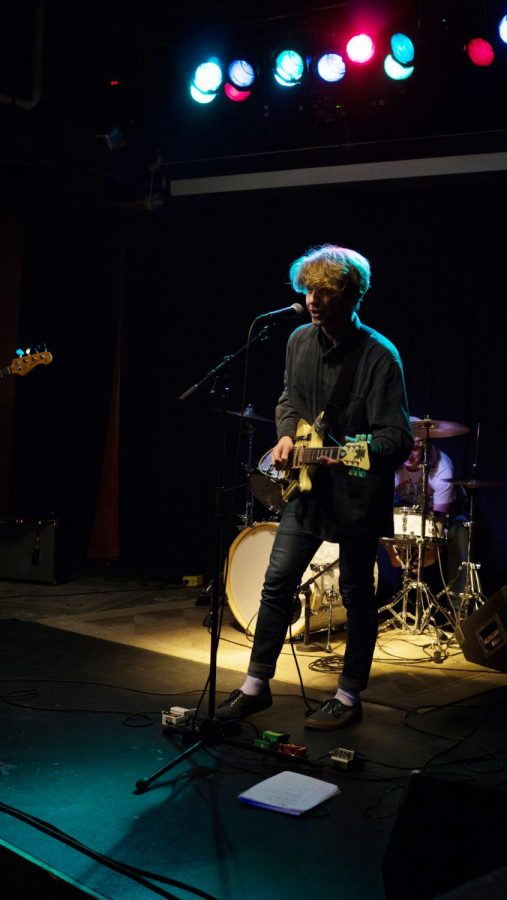 Reeve Union Board hosted four bands in the Titan Underground for a Battle of the Bands competition, which included cash prizes, on Nov. 15.

Each band was given 20 minutes to perform, but alternative rock group Diet Lite prevailed.
Judges said Diet Lite’s well-rounded set, original songs and catchy riffs helped them stand out from the competition.

“They were tight, they had a ton of energy and they were creative,” Lamers said.

Diet Lite drummer Evan Marsalli said winning this year was a surprise because of how they performed in last year’s competition. Last year Diet Lite formed for the first time to play in the same Battle of the Bands competition; however, they didn’t place.

“We’ve come a long way since then,” Marsalli said. “So I guess that does show how much we have grown as a band.”

Marsalli said writing original songs is an organic process for them. He said it usually starts with somebody presenting a new idea.

“One of us will bring something to the table, like a riff or a chord progression we want to write something to, and then somebody else will have something they already thought of for a song structure,” Marsalli said.

Marsalli said right now, the band is focusing on getting their album out and releasing their music video. He said Diet Lite will be performing more live shows in the second semester.

“Every time we play live we have more people asking us to play here or there,” Marsalli said. “It’s like the more people who hear your stuff, the more opportunities you’ll have.”

Four-person rock band Utopia Rising came in second place with a performance that included covers of songs like “Rock and Roll” by Led Zeppelin and “Highway Tune” by Greta Van Fleet.

Utopia Rising guitarist Noah Eckstein said he knew they had to do a song by Led Zeppelin and that he never questioned vocalist Abby Shreve’s ability to perform.

“She’s such a great vocalist,” Eckstein said. “I never worried once if she was going to hit those notes. I knew she could do it.”

“It was exciting; I wasn’t exactly sure how it was going to go, but I think it went well,” Eckstein said.

He said he had no idea there was a cash incentive, and for him, it was all about playing music.

“I just really wanted to get up and play,” Eckstein said. “It’s my place; it’s where I feel most comfortable.”

In third place was an all-freshmen brass band called The Phlat Brass Band. Tuba player Chandler Sumner Gehrig told the audience that they are just a group of freshmen that wanted to get together and play music.

The Phlat Brass Band formed just days before the competition, but baritone saxophone player Joshua Roberts said they saw it as an opportunity they couldn’t pass up.

“We’re all musicians, we’re all in the music program and it’s just something we all love doing, which is playing music and trying to perform,” Roberts said.

Roberts said performing live as a band was a learning experience. He said the judges gave them informative feedback and they look forward to using it in their next performance.

Roberts said The Phlat Brass Band is looking to grow in many ways, but for now they look to acquire an individual style.

“I know we’re just trying to have fun as we do this, but I know we also want to slowly develop who we are as a group,” Roberts said.

Event coordinator Morgan DiPietro said she is an advocate for student musicians and looks to give students as many ways to get involved in music as possible.

“I am passionate about the music industry and all genres of music,” DiPietro said. “I want to bring more music to campus and enrich students’ lives by creating more events and things to do.”

She said being able to give out money to student-musicians for instruments and allowing them a chance to perform are things she enjoys about being a music event coordinator.

UWO students Madison Fisler and Jacklyn Morales said they enjoyed being at the on-campus event.

“It was super fun; I like seeing people do what they love just because they love it,” Fisler said.

Fisler and Morales said each band provided great energy. They said all the performers offered something different and something fun.