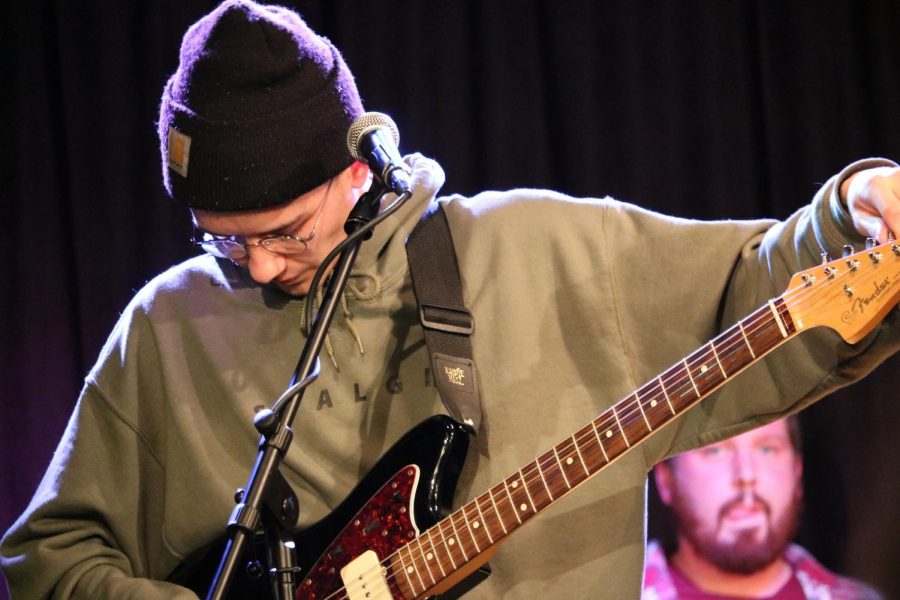 Bottom of the Lake vocalist and rhythm guitarist Brett Schlidt tunes in as he wears a Stalgic sweatshirt, the two bands have collaborated on a number of projects including a four-song digital album Split.

“Five of the region’s top rock bands gathered in the Titan Underground on March 14 to play Wisco! The Music Fest! hosted by Reeve Union Board.

Subgenres included indie, alternative and emo rock. No judges were present, but prizes were awarded, and pie was offered as March 14 is National Pie Day.

Coming off their countrywide tour and first to the stage was a four-man band out of Green Bay called Stalgic.

Stalgic played a mix of original songs new and old including some from their upcoming album, which band members have kept the name of secret.

“Deeper lyrics, darker mood, a bit of angst, fear and anxiety,” Miller said. “Musically, it’s still us, but a little more pissed. There is better complimentary guitar work and new vocal ideas. As a whole, we hope it rings true to people’s full spectrum of emotions they feel: anger, fear, anxiety, depression, remorse, nostalgia and happiness.”

Second on stage was Horace Greene, a band whose members played without shoes and were seen drinking Coronas and Bud Lights before their set.

Horace Greene played love songs with melodies, choruses and lyrics like “I get fevers when you jump around” and “I hope this love don’t keep me down.”

Lead singer Tony Oakley said he couldn’t remember where the inspiration for the song “Fevers” came from but remembers he was sick with mononucleosis when he wrote it.

“I was just sitting in my room, and I had this synth-bass I was playing with, and I put these funky guitar chords over it, and Sam [the bass player] came home, and I was like, ‘Dude, you gotta check this out,’” Oakley said. “I wrote the lyrics after I wrote the song.”

And during a moment of what appeared to be rock appreciation, members of Horace Greene crouched down and played their instruments as Oakley claimed a four-foot stereo and got into a crouched position himself, which led many people in the audience to raise pitchforked rock signs with their hands in salute.

Third to the stage was emo-rock band Bottom of the Lake. Their songs had crescendos of guitar, drum and vocal build up capped off by a momentary silence and picked up again on the same chord, effectively leading many in the audience to stare with a fixed interest and some to yell out emotionally.

Vocalist and rhythm guitarist Brett Schlidt said their songs mean a lot to them, and that’s what goes into their performances.

“There’s a lot of emotions in our songs, and we’ve gotten to the point now where playing the song is like muscle memory,” Schlidt said. There’s just nothing left for us to do but get into the show and be comfortable.”

Members of Bottom of the Lake were physically spent by the end for their set, wiping sweat from their brows and bending over for air.

Following Bottom of the Lake was a four-man band from Wausau called Barely Civil.

All Barely Civil band members contributed to vocals; however, only the lead vocalist sang into a microphone while the remaining band members shouted out their lyrics in pronounced and throaty voices.

Rounding out the evening was a band from Minneapolis called Of the Orchard. The only three-man band of the evening and the only band to feature an acoustic guitar, Of the Orchard played their last song in tribute to growing older.

“As we’ve all gotten older, we’ve started to realize that the older you get the less you know, and that’s what this song is about,” vocalist Ben Vanden said.

Event coordinator Morgan DiPietro said she was happy with the turnout.

“I thought it went well,” DiPietro said. “The prizes and pie went over very well, and all the bands were easy to work with. Overall, it was a smooth flowing event, and I was very pleased.”