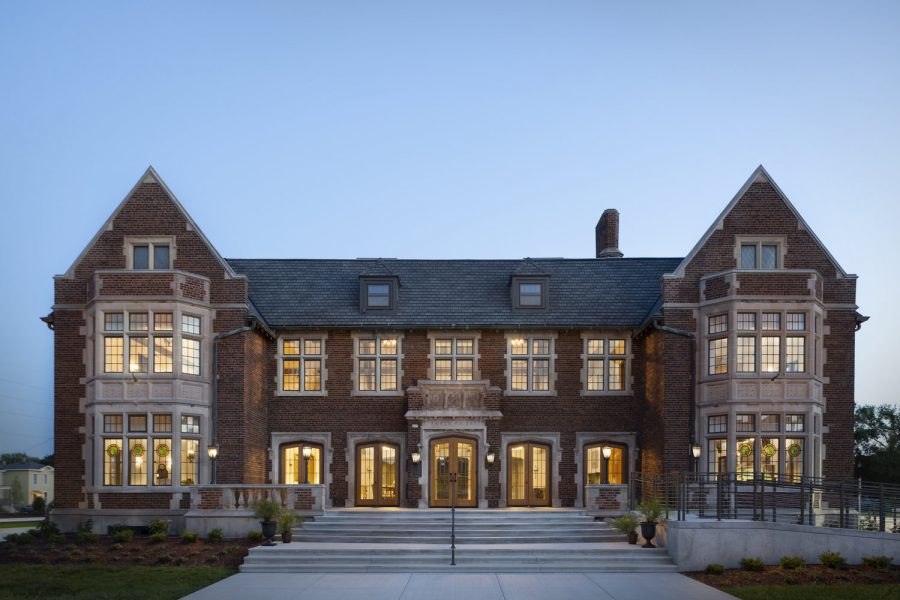 The Howard’s facade, designed in 1927 by architect Henry Auler, is built in the Old English/tudor revival style.

Once a men’s-only Eagles Club, the tudor-revival style building at 405 Washington Ave. in Oshkosh, has been given new life under the ownership of sisters Jenna Golem and Carey Sharpe.

Since purchasing the building, Sharpe and Golem have restored much of the original craftsmanship of the building and have successfully had the property listed in the National Register and State Register of Historic Places by the Secretary of the Interior.

The property has been named the Howard, after Sharpe and Golem’s grandfather and now operates many different facets, including a café, coffee bar, private event spaces, concert hall and 10-lane bowling alley.
When Sharpe, an Oshkosh native, returned to the area three years ago to start raising her family, she said starting a business wasn’t something she intended to do.

Sharpe and Golem purchased the property following the completion of the Oshkosh downtown YMCA, fearing that the building would be demolished or renovated to house offices or apartments.

“We were just looking to better our community,” Sharpe said. “We were looking at the surrounding area and just realizing that the Eagles Club was an extraordinarily beautiful building, it just needed somebody to really give it some love.”

Getting the Howard listed on the historical registries was one of the sisters’ first goals after purchasing the property.

“Putting it on the register really will make sure that it is maintained in the future,” Sharpe said.

Sharpe and Golem followed the specific guidelines to maintain the building’s historical accuracy and despite that painstaking process, hit few major roadblocks.

“A lot of little things came up,” Sharpe said. “Just overall, the walls are completely solid and it’s an old building from the 1920s, and there’s asbestos in the walls. So every time we wanted to move electrical wire or plumbing it’s just a huge logistical challenge.”

From there on, the sisters worked toward restoring the vitality of the prior Eagles Club, aiming to make the Howard a staple of entertainment and life in the Oshkosh downtown area.

“So we had a vision for bringing it back to its former glory and using it for a lot of the same things that it was always used for like big social gatherings such as weddings, birthday parties and concerts and all kinds of things,” Sharpe said, “so we decided to tackle the project and completely refurbish it and restore it.”

Since opening about six months ago, Sharpe and Golem have taken on roles as the Howard’s creative directors, simultaneously employing two day-to-day managers, a bar manager, an events manager, two chefs, waitstaff and baristas and according to Sharp building this team was the biggest challenge.

“When you open a business of this size, you need a pretty decent-sized number of employees right off the bat, so we went from having no employees to having 60-something in the span of a couple weeks,” Sharpe said.

The Howard is both Sharpe and Golem’s first experience starting a business.

“Obviously this is a very new venture for all of us,” Sharpe said. “We’re running a coffee bar and café, and we’ve got the bowling alley down in the basement, and then we’re doing a lot of private events, but then we’re also doing these big public events where we’re putting on these concerts and stuff, so they’re four very different things that we had to figure out right out of the gate.”

Despite the many challenges small business owners face when starting up, Sharpe says the process with the Howard has gone almost without a hitch.

“There were little things that we had to kind of reimagine, but overall our vision for what we wanted for the space or for the business has been going really smoothly,” Sharpe said. “It’s still a pretty new business, so everything’s not perfect perfect, and we want it to be perfect right out of the gate and it’s very hard to be, but I think overall it’s pretty unique kind of experience, and it’s a really fun place to be.”

Sharpe, who said she has a particular love for music, is excited for the future of the music venue within the Howard. Recently, the Howard has partnered with Appleton musician Cory Chisel’s Refuge Arts.

“We’re going to be doing a lot more concerts and events-based things, kind of like more of a big party,” Sharpe said. “It’s just a really fun time, and it’s something that’s different from other things you can do in Oshkosh.”