Math tutoring will close at semester due to funding cuts tuition 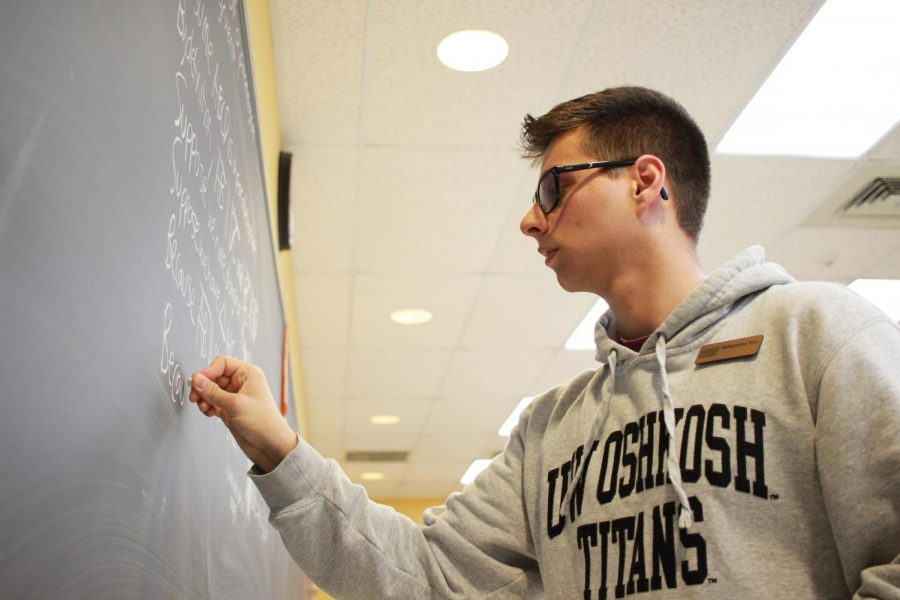 Many students need supplemental help with mathematics, yet the Differential Tuition Finance Committee at UW Oshkosh has decided to cut funding for the Mathematics Tutoring Lab in Swart 113.

The Swart 113 lab, which provides tutoring for students in Math 104 and 11 other higher-level courses, will no longer be staffed following the spring 2019 semester.

UWO’s Differential Tuition Finance Committee made the decision to discontinue the services provided to Swart 113 due to a lack of funds from the tuition freeze and lower enrollment rates.

The mathematics department at UWO proposes a budget to the DTFC each year and has received funding for Swart 113 every year since Jayanthi Ganapathy became the faculty supervisor of the lab in 2011.

“It wasn’t a guarantee, but there was absolutely no indication that they were not going to fund it this year,” Ganapathy said. “It came out of the blue, and all they would tell me as for a reason as to why is because of the tuition freeze.”

Ganapathy said it will be difficult to determine what impact cutting the lab will have on students until it happens, but she is worried nonetheless.

“Many of them have told us that they depend on that kind of service.” Ganapathy said.

Both Swart 113 and Swart 301, which serve developmental math courses, provide students with drop-in tutoring in the same building as many mathematics courses, allowing students a great deal of flexibility.

“Oftentimes, students, either just before class or right after class when they’re doing homework, they will go in there.” Ganapathy said.

The decision to defund Swart 113 brings to question what financial value is placed on the success of students who receive help from the lab.

“It’s been really helpful because it’s cleared a lot of concepts up that they haven’t been able to fully grasp,” Shay Hendricks, a tutor in the Swart 113 lab, said. “It seems like it’s a foreign language to everyone, you know?”

But now students will have to look elsewhere to find the help they need to succeed in their academics.

“I think that the students who use the lab a lot are going to have a lot of problems,” Ganapathy said. “The only option they have now is the Center for Academic Resources.”

The DTFC’s intent was for the CAR to absorb the services provided by Swart 113, although the decision was made without consulting either Ganapathy or anyone from the CAR. The first time the CAR heard anything about the change was in a phone call from UWO Provost John Koker.

“I had no idea they were doing that,” CAR director Jessica Spanbauer said. “It was a bit of a surprise.”

In an attempt to fulfill the need of students after cutting Swart 113, the DTFC has allocated the CAR an additional $10,000 to expand their math tutoring. The CAR is trying to optimize the math tutoring they will offer, holding drop-in hours at the most popular times for the Swart 113 lab, but $10,000 doesn’t go a long way, Spanbauer said.

The math department and Swart 113 are skeptical of the CAR’s ability to provide tutoring at the level Swart 113 has. The CAR’s tutors typically provide one-on-one sessions, so a lot depends on the coordination of the student and the tutor. Ganapathy, along with several students who have provided feedback about the closing of the lab, are worried that the CAR’s tutors might be too busy to help students.

“Everything depends on whether they respond or not, so it’s like students needing help are at their mercy,” Ganapathy said.

Hendricks said he is worried the process of finding a tutor, reaching out and scheduling an appointment at the CAR could potentially discourage students from getting the help they need.

“It’s going to be upsetting because they’re not going to be able to get that help as easily as before,” Hendricks said. “For students that are taking these classes, like 104 especially, I’m kind of concerned for them.”

The CAR plans to offer about four hours of drop-in tutoring for Math 104 on weekdays, according to Spanbauer. Math 104 will be the only course with drop-in tutoring available as it receives the most visits at the Swart 113 lab. The CAR will also be trialling a supplemental instruction session for Math 104, something that has been popular with students in courses such as Biology 105. Students in higher-level math courses may find it more difficult to get help as they will have to rely on individual tutoring.

There is still question as to whether the CAR will be equipped to accommodate the volume of students Swart 113 see — often as many as one hundred each week. The supplemental instruction sessions may not do well as they stand in opposition to the flexibility of the drop-in hours enjoyed by students currently.

Both Spanbauer and Ganapathy said it may not be enough for students. On the CAR’s end, $10,000 — only a third of what Swart 113 received — likely won’t be sufficient to maintain the level of support students have received in the past.
“That’s a very good option, but in addition to this,” Ganapathy said. “Not without it; that’s not going to take care of the needs of the students.”

Spanbauer said that the CAR will be keeping a close eye on their data over the coming year so that they can determine if students’ needs are being met and report their findings back to the DTFC.

The future of math tutoring on campus is subject to change in the future. If the DTFC is able to allocate more funds to important academic resources, the Swart 113 lab may reopen in the future, or they may choose to keep funding the CAR. Either way, the students in need of help are the guinea pigs who will be impacted by the DTFC’s decision, for better or for worse.