The Time Theater keeps on ticking 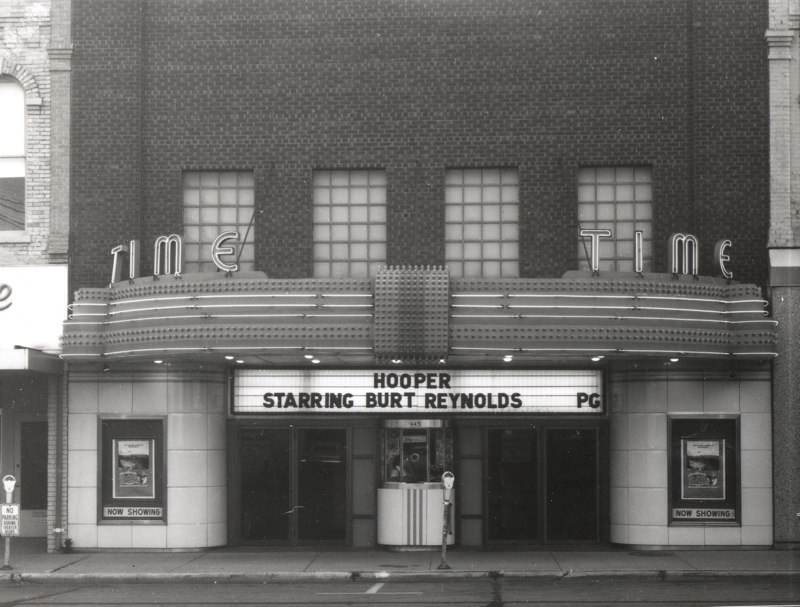 An old-fashioned marquee and box office, nestled within downtown Oshkosh, houses a theater with a century-old tradition of screening films for the community without the bombastic nature of the corporate-owned multiplex.

The Time Community Theater has been a staple of the Oshkosh community for over a century, offering people of all ages a nostalgic space to enjoy movie magic.

After 100 years of changing names and ownership, the Time has finally gained stability over the past decade, providing a space for the community to enjoy classic movies in early 1900s fashion.

However, because it depends on volunteers to keep itself running, the theater requires a consistent moviegoing audience to keep the classic sense of wonder alive.

A brief history of the Time

UW Oshkosh Director of Radio Services Randall Davidson has done extensive research into the history of movie theaters in Oshkosh.

According to Davidson, downtown Oshkosh used to be packed with movie theaters in the early 1900s. He listed 11 different addresses on Main Street alone that, at one time, housed a movie theater.

In 1908, what is now known as the Time Community Theater opened as the Superba only to be renamed the Rex in 1911, before becoming the New People’s Theater for a brief stint in 1914.

It once again became the Rex in 1919, this time referred to as the “New” Rex by the locals, and had on-and-off success until 1939 when it was renamed the Time.

The Time became the Time Cinema in 1980, but closed in 1991 and remained vacant until it was reopened in 2008 as the theater it is today.
Davidson believes the Time is a valuable asset to Oshkosh’s downtown that attracts people from all over the state.

“If I won the Mega Millions, I would pour a bundle into restoring it,” he said. “I think it’s such a nice thing to have downtown. People are even driving up from Madison to attend because there’s nothing like it anywhere else.”

The Time in modern day

Volunteers have run the Time in its entirety since 2007. Operated by a nonprofit organization, the 439-seat theater screens second run and public domain films and cult classics such as “Plan 9 from Outer Space” and “The Goonies.”

The theater’s lobby is bright and covered in movie posters from the past century.

Concessions are part of the moviegoing experience. To help the theater remain afloat, the Time offers popcorn, candy and even beer to its audience.

Along with the movie screen, the Time also features a stage where it occasionally hosts live events like their annual “Rocky Horror Picture Show” screening, seances and magic shows.

The experience of seeing a film at the Time is unlike watching a movie at a multiplex. When certain movies considered so-bad-they’re-good are screened, the audience is encouraged to shout out jokes and enjoy themselves in ways that are unacceptable at most theaters.

Movies shown at the Time

Philip Krause, president of the nonprofit board that runs the Time, said in the beginning, the theater mainly focused on the Friday Fright Night horror movie series, but in recent years, the theater has grown in popularity and now also shows movies almost every Saturday night.

The organization’s board selects films and seriously considers the many requests made by theater visitors.

For films not in the public domain, the Time pays a screening fee to a releasing company, usually around $300, and some films are simply off limits for various legal reasons, Krause said.

While Friday Fright Night remains a staple of the Time’s lineup because of Oshkosh’s robust horror fanbase, Krause said movies that generally receive the most attention are comedies and action films from the ‘80s and ‘90s as well as childrens movies.

“If you loved it as a kid and now you have kids and you get to bring them to see it on the big screen, that’s kind of where we’re aiming,” he said.

Even though the R-rated “Rocky” show is the theater’s biggest attraction, Krause tries to keep the movie selections mostly PG or PG-13 to build a family-friendly environment. Prices are kept low and affordable, too. Friday and Saturday movies are usually $4 at the door.

The community appreciates the experience the Time Community Theater offers to the public and families.

“I just love the nostalgia,” Oshkosh resident David Saunders said. “The price is amazing. I love that it’s nonprofit; it’s just a fun time for everybody.”

The future of the the Time

Krause has big plans for the future of the Time, including more live events and renovations. But with only a couple dozen volunteers on rotation, he’s always looking for more people to participate.

The Time’s longest-running volunteer, Lee Marohn, said he has enjoyed donating his time to the theater for eight years. He said even cleaning up after the show can be fun because the volunteers are so great.