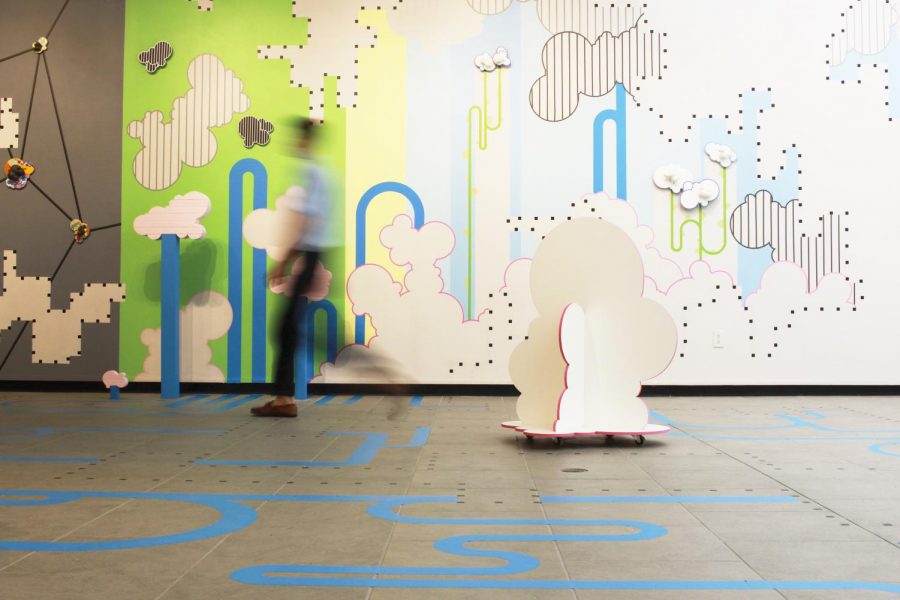 Illinois artist Joe Page’s “Flow Chart” exhibit has been displayed across the country in universities and art centers alike.
The exhibit opened on Sept. 3 and will remain on display until Oct. 3.

“Flow Chart” is a highly immersive environment that allows the viewer to situate themselves at their own comfort and pace. The installation is full of vibrant colors and designs that become more and more intricate as the viewer’s eyes look at them longer. For Page, this is somewhat reflective of his own creative process.

“I’m of the notion that ideas aren’t incredibly useful in and of themselves,” Page said. “As a visual person, I’m not entirely certain I even understand my own ideas until I can make them visible in some way: a chart, a diagram, a doodle.”

“Flow Chart” embodies that process. Page developed the imagery of this most recent exhibition series, taking inspiration from the design on maps, pinball machines and retro video games in particular.

“They were these immersive, altered environments to be transported into via the television screen and a controller in your hands,” Page said of the video games he played in his childhood. “I like the viewer to find the value of immersive exploration within an altered environment of a different nature.”

Each element adds something to the exhibit, playing a role in the larger complexity of the installation and contributing to the dreamlike landscape that a viewer walks into.

“I try to be playful in the way I engage material in a piece of artwork,” Page said. “On a practical level, I ask how the material benefits the work structurally, but on a conceptual level, I’m interested in the context of a material: its history and cultural usage.”

The foam clouds are a good example of what Page means by this. While the foam is great for cutting to the desired, playful shape, it is ironically also a toxic material used in building construction.

There’s a striking amount of detail in the exhibition. A feature in one place of the exhibit may let its influence fade as the works spreads across the wall, yet that feature may turn into a finer detail in a different area. Thousands of pieces of detailed vinyl are cut and placed intricately and deliberately into a larger piece that eventually engulfs an entire space.

“These installation pieces are like a long-distance endurance race in many respects,” Page said of the installation. “Hundreds of man-hours of work, all compressed into the span of a week or so. I always attempt to bring a complexity and attention to detail to each site-specific piece I make, so I keep working until I’ve addressed those goals in a given work.”

The exhibit is aptly named, not only describing the installation’s fluid and seamless appearance, but also conjuring images of early flow charts and intricacies comparable to Fritz Kahn’s detailed infographics of the mid 20th century.

The exhibit has so many motifs of motion and direction that it’s difficult to imagine being stuck, but even as an assistant professor of ceramics at Southern Illinois University in Edwardsville, Page faces challenges in his creative process.

“The biggest road blocks I find are generally getting going on a new project after a break from the studio,” Page said. “Those new ideas can be paralyzing at times; the best way forward is to make anything. Movement in the studio is everything.”