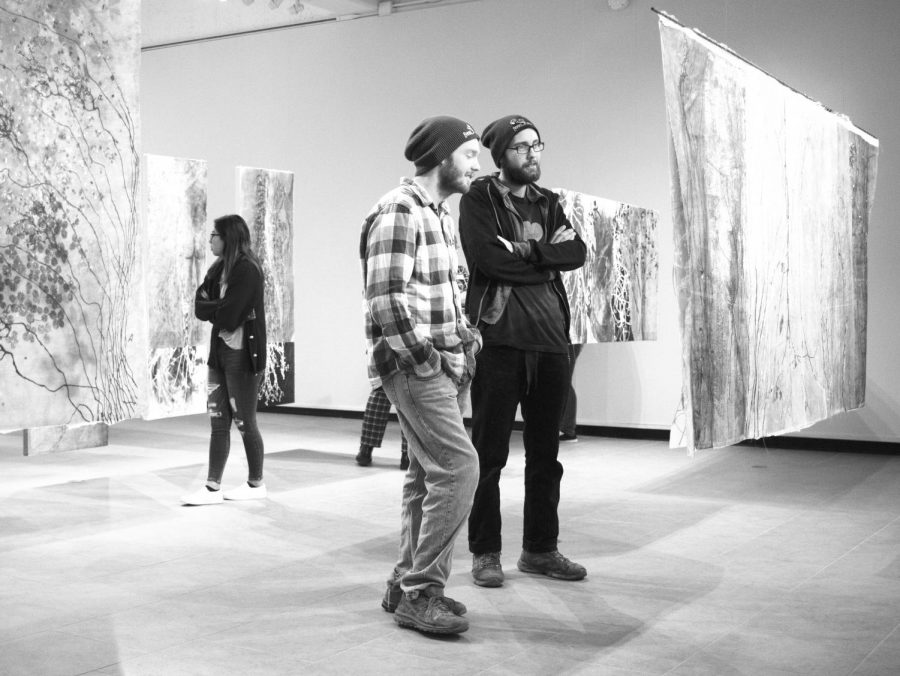 The exhibition features large prints of natural forms and objects hanging on the walls and suspended from wires, allowing for an immersive viewing experience as the viewer can walk between the pieces and view several pieces from two sides.

Hunder has said of her work in the past that “natural forms speak to us in metaphors – roots, branches, blossoms. The intention of natural science is to understand our surroundings, but nature leads inward as well. The study of the natural work is also a kind of philosophy.”

On Thursday she expanded on this philosophy of hers.

“I think it’s just the idea that there’s different places to find truth,” Hunder said. “There’s scientific study and observation. The idea that there’s some kind of truth or meaning in the natural world is what I mean by that. I really feel like the way people think is a reflection of their surroundings. When you’re trying to formulate a thought, you can kind of use what’s around you to structure that thought.”

The exhibition’s title, “Intricate Ingress,” is a reflection of her philosophy of taking influence from the natural world, looking inward, searching for understanding and the quest for knowledge.

“My most recent works are these kind of figural pieces, and I felt like they were kind of like pictures of people who are looking for something,” Hunder said. “A couple of the figures are from these murals where they’re doing ritual practices, and it’s sort of the idea of exploring spirituality or exploring meaning, creating meaning, and the things people have done over time to try and understand themselves, and so the idea of ‘Ingress’ was sort of a way of going into that, and there were so many different angles and complicated ways to get there.”

The monochromatic, dark images in Hunder’s exhibition are very emotive.

“They’re very dark and mysterious, kind of like you’re entering a forest,” Hunder said of her works.

Originally, Hunder was interested in photography because of the way it documented something tangible.

“I really liked taking things from real life, like the photographs, because they could be really expressive, but they were also something from the real world,” Hunder said.

Her work shifted more toward printmaking by chance when she was forced to use a medium aside from photography, which she was comfortable with.

“I was doing this residency in Vermont, but they didn’t have the photography equipment I needed, and I was like, ‘What’s a different way to document?’ so I started printing directly from the plants,” Hunder said.

She quickly came to enjoy the nuanced details of her unique printmaking style.

“A lot of this work started at that residency, and I printed these things, and I threw them on the wall, and I was like, ‘Well, these ones kind of go together,’ and so I started grouping them together into these arrangements and collaging more, and it was really experimental and really intuitive,” Hunder said. “It’s a different type of document, and I kind of love the textures, and how you can see exactly how it was made, you know, the plants embossed into the paper.”

Hunder’s “Intricate Ingress” will be on exhibition through Oct. 30.