Beast on the Moon 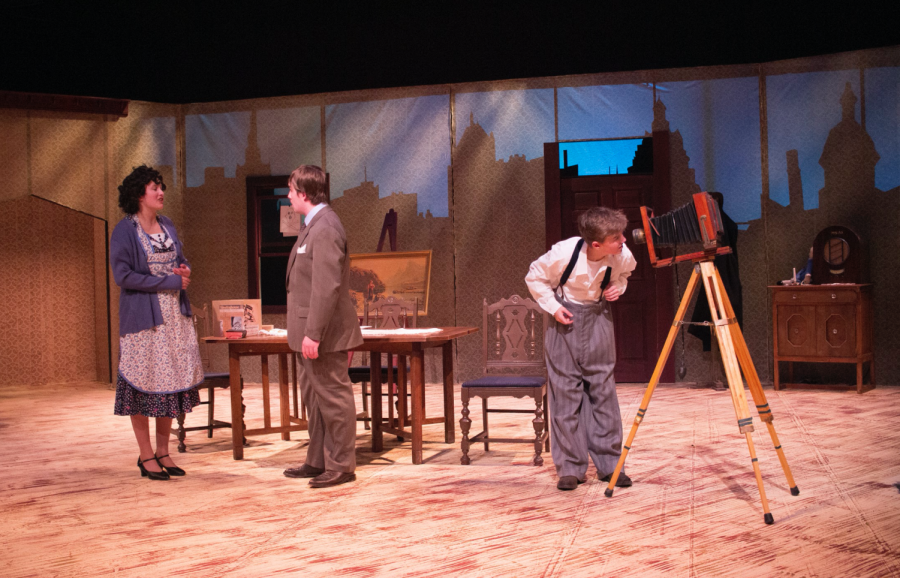 FROM LEFT: Ali Basham as Seta, Max Benitz as Aram and Dawson Fish as a young Vincent fill the stage as Aram confronts Seta.

“Beast on the Moon,” known the world over and written by UW Oshkosh professor Richard Kalinoski, is opening for its first performance in the experimental theatre of the Frederic March Theatre on Feb. 27
The play has been translated into 19 languages and has been produced across the globe from Montreal to London to Paris, to towns in remote Siberia. This is the first time Kalinoski’s show is being produced at UWO.

From the first moments of the play, the arrhythmic clacking of footsteps anxiously pacing the stage, the audience is drawn into the narrative surrounding the relationship of Aram, an Armenian refugee, and his child-bride, Seta.

The audience is pulled into the poignant dissonance between Aram and Seta. The two can hardly relate on any level other than that of the trauma of their past, escaping the Armenian genocide, and their struggles with infertility. The experimental theatre places the audience intimately close to the stage.

“When you have a story that really tugs on your heartstrings — a story that connects with its audience, really bringing it closer to the people who are witnessing it makes that a lot easier,” Max Benitz, who plays Aram, said of the venue.

“I get to work with a character that has all these intricacies to him and he has this deep sadness, but at the same time,” Benitz said. “Aram is always masking that and trying to become more than that, and being able to play with that has been really great.”

Aram, who has made his living in America as a photographer, is tortured daily by taking portraits of families. He and Seta are unable to conceive a child — Seta became infertile after starving during the genocide.

This is Kalinoski’s first time directing “Beast on the Moon” in about two decades, giving the actors a unique experience of being directed by the playwright.

“It’s not too often when you get the priveledge of having the playwright in the room — almost never — so to have the man who wrote the play in the room has been wonderful,” Benitz said. “You’re always able to ask questions and really able to build the character.”

Chris Flieller plays the role of a grown version of the child Aram and Seta eventually take in.

“Working with the director who also happens to be the playwright can be a little daunting, but richard is very generous, and really tries to put you at ease about your role in the show,” Flieller said. “So really, I’ve had a lovely time working on the show. It’s an easy part to do, because it’s written so beautifully. The words just kind of spill out. It was easy to memorize because the language has a beautiful music to it and a lyrical poetry to it. It was easy to get into me, and it’s easy to give out.”

Ali Basham plays Seta, the child-bride who learns she is infertile during the play.

“It’s hard to convey the emotions when there are so many in the show. You want to make it obvious, when you’re trying to express something as an actor, but you want it to be realistic,” Basham said. “Just finding the character of seta herself and having the personality, but still trying to deal with her past of the genocide and being and orphan and losing her family and everything.”

The play’s subject and theme is full of sadness, with vignettes of a Aram and Seta’s decaying marriage punctuated by fading, dim blue lights.

“It’s still horribly relevant,” Flieller said. “We are at a moment now in history when they are more refugees — displaced persons — than other time in human history. This story of refugees, finding their way, finding their place in an America that welcomes them hasn’t lost any of its charge over the years.”

For Kalinoski, the experience of directing his own play for the first time in 20 years has been revealing.

“The eye-opening part of it is that I find myself, as a director, questioning some of the choices that the playwright made,” Kalinoski kidded.

Kalinoski said that the UWO production has a few minor changes to it; a word here, a detail there to make the play more concrete, which he said he never expected to do.