Sole food: A portrait of our footwear 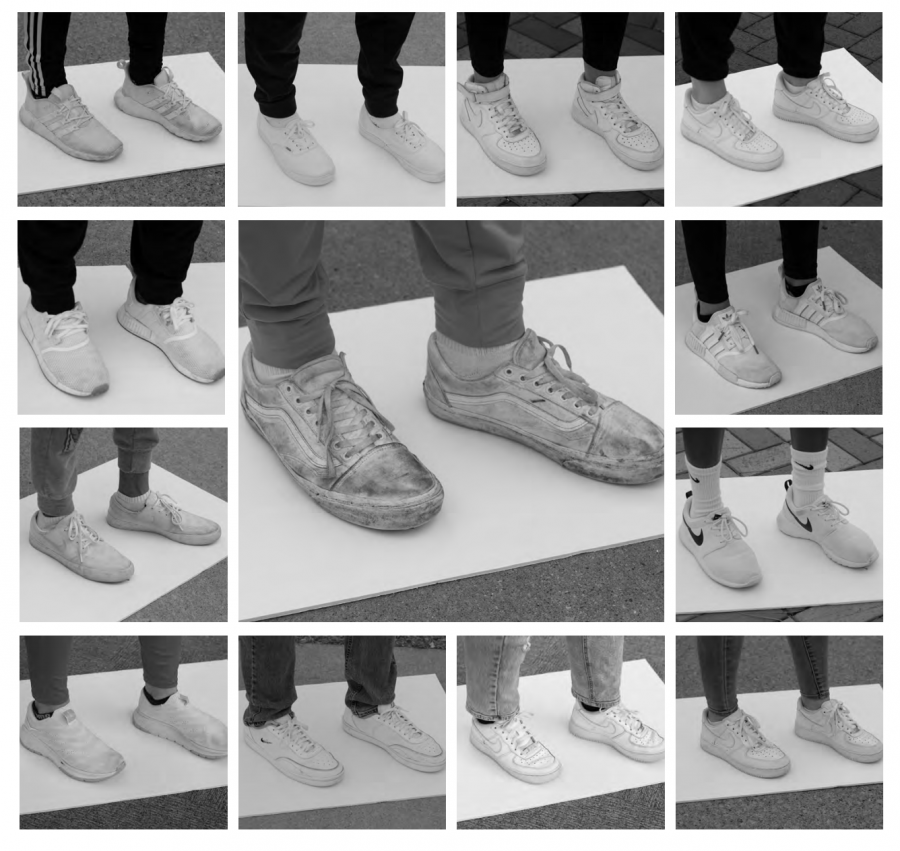 Courtesy of Carter Uslabar with the Advance Titan

In fall, there’s an obvious change in seasons, marked by a change in the colors of our surroundings. Colors drain from the trees as they shed their leaves, and students’ white shoes change from blinding whites to spotty grays.

White shoes. Why do we buy these? They get dirty so easily, quickly losing the sparkling, unadulterated pureness they have fresh out of the box. To understand white shoes, let’s take a trip back to where else but Victorian England.

White, of course, is often associated with purity. “Cleanliness is next to godliness,” that whole gambit. But it wasn’t necessarily associated with wealth, as the colloquialism of a white-collar job would induce you to believe.

Interestingly, this initial white of white collar professions didn’t refer so much to the fact these clerical professions were less messy, but to the stiff white collars which literally restricted movement. Hatred ensued, of course. It’s much easier to look down your nose at another man if your neck is actually braced upright by your collar.

Sedentary, nonphysical labor was the mark of wealth during the Victorian era, but fast forward to the early years of the 20th century, and white shirts had been democratized by the industrial process. Around the same time, rubber started to enjoy employment as the choice sole for shoes.

America’s burgeoning consumer culture and growing obsession with the aesthetics of athletics necessitated the purchase of all the proper equipment for such activities. Suddenly white shoes were everywhere.

White shoes are like ever-increasing responsibilities: the longer you stare, the more of them you see. UW Oshkosh’s campus is like a cornucopia of Air Force 1’s, Yeezys, Ultraboosts and Vans Eras.

These shoes are all renowned for their silhouettes, which are arguably the definitive characteristic of white shoes. Unadulterated by excessive branding or color, the shoes conjure an image of the relaxed or the athletic. Why be those things when our shoes can simply project an image of them?

White shoes seem like such a delicate sartorial choice. They give off an air of the bourgeois, for who else could be so willfully reckless regarding their shoes, or at least be unbothered by their increasingly soiled state? But it’s actually not bourgeois at all. Just like white shirts in the early 20th century, white shoes are cheaply manufactured and replaceable.

Still, it begs the question why so many people — and all of the students I asked — prefer their white shoes slightly scuffed up, tarnished or not quite clean.

Joshua Vue, a UWO student, said he thinks people who keep their white shoes super clean might be insecure or concerned about what people think of them.

“I don’t care what people think of me,” Vue, whose white shoes were clean, but well worn and obviously scuffed, said.

On a scale of one to ten, one being brand new, ten being filthy, UWO sophomore Alexis Pyrchalla said she prefers her white shoes around a three.

“They don’t look too new,” Pyrchalla said. “[If they’re too new], it throws off your outfit. You’ve got to look like you’ve worn them a couple of times.”

But Pyrchalla, like every other student I asked, said she wouldn’t deliberately soil her shoes to achieve this broken-in look.

“It wouldn’t be authentic,” Pyrchalla said.

But what’s the difference between something being soiled deliberately or ‘authentically,’ by neglect? Pyrchalla didn’t know. Neither do I, but one might argue that deliberate destruction is better than the attrition of neglect.

“They’ve been through some things,” Forster said. “They got really muddy one day, and I think when they look too dirty I like to make them look somewhat clean at least.”

But Forster said the level of effort she puts toward keeping her shoes clean diminishes the longer she has them.

“When I first got them, I liked to try to keep them as clean as possible,” Forster said. “So I’m walking around puddles and not trying to go anywhere off the path, but now I’m kind of like, ‘eh, they’ve been through some stuff.’”

Aside from Forster’s comment being an uncanny metaphor for romantic relationships, I can’t help but wonder why people like their white shoes to be somewhat dirty. It’s hard to imagine someone holding the same position when it comes to a shirt.

Regardless, white shoes have become a ubiquitous, steadfast vessel in the sea of ever-changing fast fashion. For better or for worse — whether they serve as a simple article to punctuate a stylish outfit, or to signal one’s perfectionism — white shoes, like jeans and leather jackets, appear unlikely to be going anywhere anytime soon.