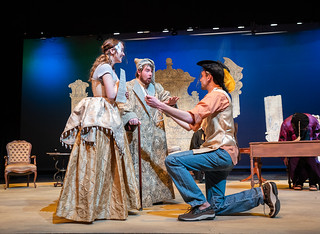 Courtesy of UW Oshkosh / UWO Theatre Department “The Imaginary Invalid” cast following COVID-19 safety protocol at their rehearsal on April 15. There is a large student discount on tickets, which are now available online.

As they say in theater, “The show must go on.”

After being shut down due to COVID-19 restrictions, the UWO theatre department is again coming back to produce and broadcast a double feature.

This spring, UWO Theatre will broadcast “The Gilbert and Sullivan Tavern Follies” and “The Imaginary Invalid.”

“The Gilbert and Sullivan Tavern Follies” is about desperate Wisconsin tavern owners coming up with a scheme to save their business. Christopher Flieller is the director and Eva Thelen is the musical director.

“The Imaginary Invalid” is about the extremely wealthy Argan who spends his time summoning doctors to care for his “imaginary” ills as he is convinced that germs are out to get him.

The second play, adapted and directed by Jane Purse-WiedenHoeft, is full of fabulous fun and mayhem and is intended to poke fun at the newly emerging medical profession.

This double feature production allows you to make one purchase that buys two shows. Tickets for UWO students or faculty/staff members are $2, while general admission tickets cost $8.50. When you buy an online ticket, you’ll get a link to the video-on-demand webpage and your password to access the shows anytime between May 3-May 15. You can watch as many times as you wish.

John Zarbano, an adjunct professor and front of house manager for the theater, said they faced many challenges due to COVID-19 when it came to producing and broadcasting the plays virtually, rather than live and in-person.

For one, they faced legal issues to copyright licenses involved in using music associated with theater livestreaming/broadcasting its productions.

Zarbano said, “This is why broadcasting is so complicated because of all the legality in it.”

The double feature production includes pre-recorded songs and other pre-recorded pieces of music, so the department needed to get three different licenses — synchronization, Master-Use and ASCAP — to use the music during the pre-recorded show, Zarbano said.

The last license the theater needed was the ASCAP license, which allowed them to stream or broadcast the video via their own website, mobile app or station.

The theatre department, the Radio-TV-Film department and the music department each had their own COVID-19 protocols they follow, making production difficult.

Merlaine Angwall, director and chair of the theatre department, said, “We had to be very careful when producing these plays and that included the performers wearing face masks and shields during the performances and trying to maintain social distances.”

The theatre department faced many challenges along the way when it came to the different licenses and safety protocols, but they were happy to get back into the theater and start performing again.

The tickets to the double feature show are available now online at https://uwosh.universitytickets.com/w/default.aspx?cid=170. So go grab a bowl of popcorn, check out these awesome plays and support the theatre department.