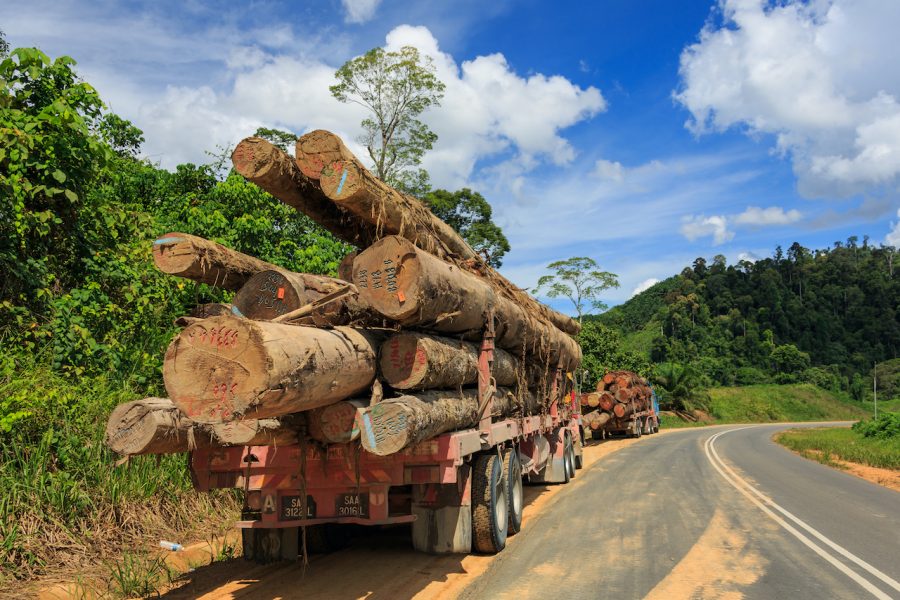 Courtesy of Wikimedia The photo is similar to a scene in the movie where the chain breaks and the logs roll out. When most people see this on the road they change lanes to avoid disaster.

“Final Destination,” a horror movie franchise about death taunting a group of people, was first released in 2000, but fans of the franchise say that some of the iconic scenes from the first few movies are still scaring them years later.

Caryssa Balk, a fan of the “Final Destination” movies, said that working at a tanning studio has definitely shown her how many people were freaked out by the scene of people getting stuck in a tanning bed like she was.

“I have worked here for six months and I can’t even tell you how many times I’ve heard it from new tanners,” Balk said.

“Final Destination” is a horror series written by Jeffery Reddick that deals with groups of people trying to avoid death when anything and everything can kill the characters.

According to Regmovie.com, Riddick confirmed that a sixth “Final Destination” was in the works before the pandemic, but

he said that it would not be a reboot. The movie will be released sometime in 2022.

Some of the iconic scenes people have mentioned that scared them, is the scene of two girls getting stuck in a tanning bed. Another frightening scene is when a chain breaks on a logging truck and a log rolls into oncoming traffic.

In an interview with UNILAD, Riddick said that the reason the movies are so terrifying is because everyone fears death.

He said he read about a woman who got off a plane because her mother had a bad feeling, the plane later crashed and a lot of people died.

“That kind of put the seed of an idea in my head – the idea of having a premonition and missing your time to die,” he said in the UNILAD article.

Balk said that she thinks the series was so popular because a lot of the situations were realistic.

“They just kept coming up with situations and seeing it up on the big screen, you couldn’t look away,” she said.

Andrew Smock, chair of the radio/tv/film department at UWO, said that he thinks that the movies were so popular because they had a signature formula that worked.

“They found an audience that kept coming back to see what Death did next,” he said.

He said one of the main ways that a movie creates fear is by taking advantage of the ways our brains work.

“Many people, if not most, fear unexpected death, then take that, add in graphic imagery, which our brains seem to be hardwired to react to, and you get a fright reaction,” Smock said.  “If the scary event in the movie seems like something that could happen to us in real life, the effect is likely to persist long after the movie ends.”

He said media researchers have looked even deeper into how people process fear, why it has such a lasting effect and why people might avoid certain situations.

“Memories stored in the amygdala can be recalled very quickly,” he said. “It’s a survival thing wired into our brains to help us react quickly in dangerous situations. That’s essentially what our brains do with something like the lumber truck scene.”

He said that the franchise affected so many people because it shows an unexpected death in a somewhat realistic way and the audience thinks that it is something that could happen to anyone.

That generates a fright response, not only during the movie, but even after it’s over.

“Your brain takes the event portrayed, even though you know it is fictional, and stores it for quick recall because of the fear it evoked when you watched the movie, fear of an unexpected death,” he said. “Then the next time you’re driving and find yourself behind a lumber truck the fright response is triggered and you change lanes to try to avoid an unexpected death.

Logically, you know that the likelihood of an accident is exceedingly slim, but your brain says danger, based on that memory and the fear tied to it and you react.”

Balk said that she will probably go see the new movie, but she will still always be freaked out by certain scenes from the original “Final Destination” movies.

“I still can’t drive behind a truck full of logs and when I first started tanning, I was super freaked out that I would be stuck in there and fried,” she said.