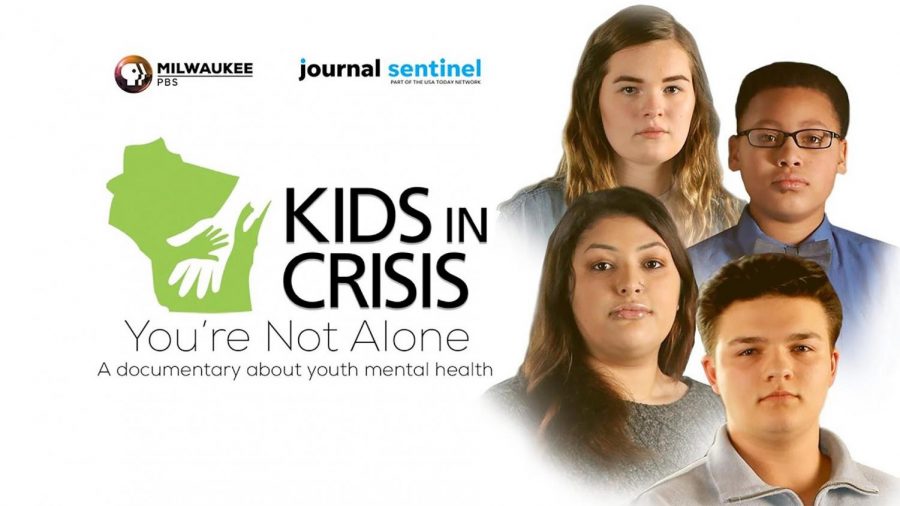 On Tuesday, Oct.12, several organizations within UW Oshkosh worked together to host a showing of the Emmy-winning documentary “Kids in Crisis: You’re Not Alone.”

“Kids in Crisis” was produced in a collaboration between the Milwaukee Journal Sentinel and USA Today Network- Wisconsin in efforts to speak out about the importance of reducing the stigma around mental health.

The film follows the journey of four adolescents opening up about their challenges with their mental health.

One of the featured students, UW Oshkosh sophomore TJ Esser, shared his story of coming out as transgender to his family, while others talk about topics such as bullying, homelessness, the fostercare system, and divorce.

“After the documentary came out, it was amazing to see the impact,” Esser said. “We began speaking as a group.”

Now, showings of the film take place on high school and college campuses to open conversations about mental health. These showings occasionally feature the panelists from the documentary to answer any questions.

Tuesday’s panel included two of the students from the film, Hanna Maechdal from Rogers Behavioral Health Clinic and Rory Linnane, Milwaukee Journal Sentinel journalist and co-producer of “Kids in Crisis.”

Although the film was unable to be shown last year due to COVID-19 restrictions, the UWO Women’s Center, LGBTQ+ Resource Center and mental health student organization Active Minds helped sponsor the showing of the documentary.

“I knew it was something I needed to bring to UWO,” said Active Minds president and UWO senior Sara Allen, referring to her involvement in the event. “I want to help educate people on the importance of mental health.”

The documentary has already proven its wide-spread impact. In February of 2020, Wisconsin Gov. Tony Evers signed a bill that would provide funding for peer-to-peer suicide prevention programs in schools across the state.

State Rep. Joan Ballweg revealed that the signing of the bill was directly inspired by the stories shared in “Kids in Crisis.”

Organizers of the documentary showing at UWO hope that the influence of the “Kids in Crisis” program continues to spread throughout the UW system.

“I know that there are a lot of passionate individuals working really hard to make students happy and healthy,” Esser commented on how mental health is viewed at UWO. “I think one of the biggest issues is the stigma surrounding mental health.”

Both Esser and Allen expressed their hope that the showing of “Kids in Crisis” would help open up further conversation regarding the mental well-being of students and faculty.

Students who are in need of help navigating mental health issues are encouraged to explore the numerous resources provided on-campus, such as the Women’s Center, the LGBTQ+ Resource Center, the Intersection, and Active Minds.

“I hope people take away that they are not alone in their fight,” Esser said. “We all struggle and we all overcome but it’s a lot easier to do it with help.”