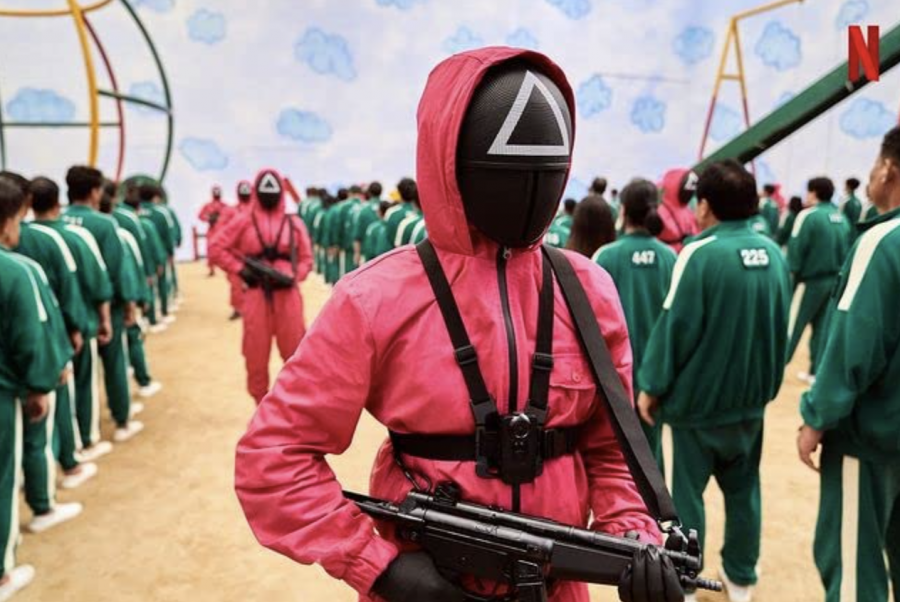 Courtesy of IMDb ‘Squid Game’ is a Korean series that follows debt-owing players through a series of children’s games in order to win a cash price, and has quickly climbed to the top of Netflix’s popularity

The attention-grabbing Netflix show “Squid Game” is shattering foreign show records with its viewing numbers thanks to its captivating plot, expansive social media presence and presentation of a wealth conversation in the U.S.

According to Business Insider, the South Korean series was ranked as the No. 1 streaming hit on Netflix in 90 countries.

The survival drama is nine episodes, and its plot surrounds 456 debt-owing citizens who are reeled in to play children’s games for a cash prize. All they have to do is follow the rules, but if they don’t, they’re wiped from existence on the spot.

This foreign series is garnering more attention from Americans than any other in the past; the show is already the first ever Korean film to become No. 1 in the U.S. Top 10 list according to Fortune.com.

UW Oshkosh radio/TV/film Mike Van Esler said that it’s important to acknowledge that Netflix rarely has foreign shows occupying the Top 10 in America despite being a global market. He also said that foreign films have been neglected for so long in the U.S. due to Americans’ lack of interest in other cultures as well as their general refusal to use subtitles.

“I think it’s important to note that Netflix is global and the only market that doesn’t regularly have foreign language shows occupying the Top 10 is America,” Van Esler said. “Most Americans simply don’t care about other cultures’ media and don’t like to read subtitles. As Bong Joon-ho said in his Oscar acceptance speech, if audiences can overcome the one-inch tall barrier of subtitles, they would be exposed to so much more excellent film and television programming.”

There is an option to listen to the series, and many foreign shows, in a dubbed format, but subtitles typically still remain depending on what the viewer is watching.

While the captivating concept of someone’s life being in peril over a video game has been shared, liked and commented on millions of times on various social media platforms, Van Esler sees the reason behind the show’s popularity being tied with the growing issue of wealth disparity occurring across the globe.

“I imagine part of the show’s popularity is that we are in a time of nearly unprecedented wealth inequality,” he said. “One of the show’s main themes is that, across all borders, there is simply not a level playing field for most people.”

With “Squid Game” blowing up and being watched by millions around the globe within just a couple of weeks of its release, it has also brought attention to foreign films of similar styles.

It’s also important to note that “Sweet Home” was the most popular Korean show on Netflix before “Squid Game” was released.

Even with “Squid Game” ushering viewership to foreign shows of a similar format, Van Esler said he doesn’t believe that Americans will begin to appreciate foreign films all of a sudden. He stated that it took anime, a style of Japanese film and television animation, a couple of decades to be regularly consumed by Americans, so he sees foreign films and shows in general taking at least that long as well.

“I don’t know how much this show will do for foreign media,” Van Esler said, “ It has taken anime roughly 20 years to penetrate the larger cultural consciousness. I’m ultimately somewhat pessimistic about Americans’ abilities to think outside our own culture.”

In terms of racial and cultural diversity being present with on-screen representation in U.S. media, Van Esler states that he doesn’t see any major changes happening unless the entire plot of a certain piece surrounds said culture in a non-white world. With anime, K-Pop and series such as “Squid Game” bursting onto the scene, Van Esler said that east Asian representation may see an increase.

“It might be better rephrased to look specifically at east Asian representation, but even then it’s not like Hollywood is going to start casting mostly non-white actors in main roles unless the movie/show specifically deals with a non-white world,” he said.

While the U.S.’s sudden rush to watch a foreign film for its plot/relation to the U.S. can serve as a mere reflection of domestic self interest, “Squid Game” continues to rise in popularity as more and more viewers watch to find out who wins the various deadly games in pursuit of wealth.