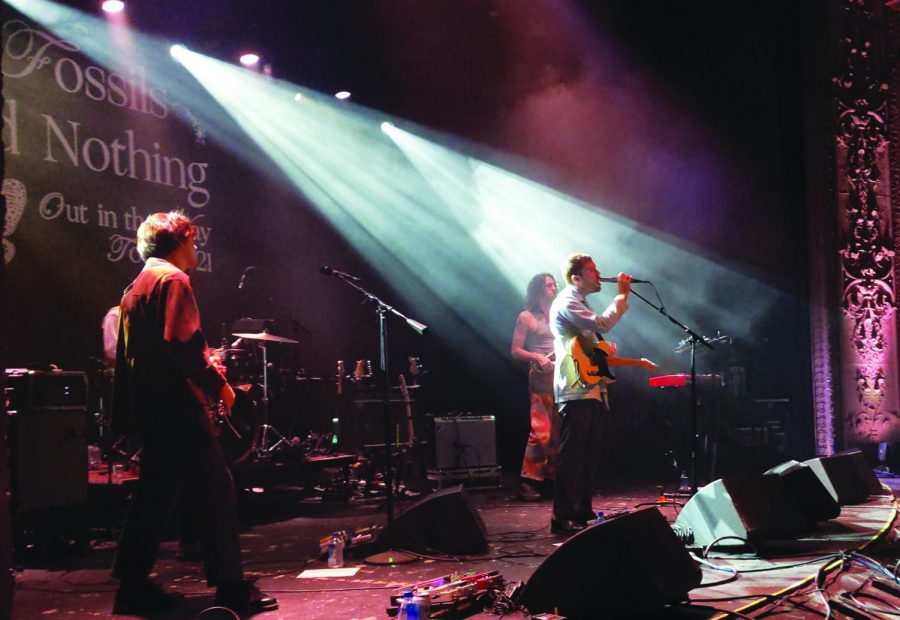 Tom Antrim / The Advance-Titan Wild Nothing performs on Oct. 7 at Thalia Hall in Chicago, after not being able to tour live for nearly 18 months due to the pandemic.

Wild Nothing performed at Thalia Hall in Chicago last Thursday with Beach Fossils and Hannah Jadagu.

The show was filled with laid-back rock tunes and a genuine sense of gratitude from the bands after not being able to tour for a year and a half.

Wild Nothing was formed over a decade ago by Jack Tatum. Tatum has crafted dreamy pop songs using an array of instrumentation and various musical styles.

The band played some songs from “Nocturne,” their second and most popular album. Even though the record was released in 2012, it features catchy and atmospheric pop songs that blatantly reference the 1980s.

Like many of Wild Nothing’s records, the bass lines are standout moments on the record. The bass lines carry these tracks along perfectly and add flavor and variety to the songs.

Traditionally, Wild Nothing has incorporated generous amounts of instrumentation and attention to detail. However, the instrumentation is taken to a new level on “Shadow” and is an excellent way to start the album.

The title track, “Nocturne” is very appropriate for this record. This track is a great representation of the album regarding vocal structure, guitar lines, and a catchy chorus.

This track has all of the key elements that make this album great. Tatum is singing low in the verses and high in the chorus, which creates strong vocal contrast that works in Wild Nothing’s favor.

The guitars in the chorus bounce back and forth to create an upbeat atmosphere that contrasts well with the more melancholic verses.

Songs like “Disappear Always” and “This Chain Won’t Break” display his ability to sing higher vocal melodies. He proves himself to be a versatile vocalist, which produces an entertaining listening experience.

“Paradise” is the longest song on the album, clocking in at nearly six minutes. However, Wild Nothing fills the space well and doesn’t make it feel drawn out.

The song is rhythmic in nature, with the bass and guitar parts working together in synchronization.

Another highlight on this record is “The Blue Dress.” The main guitar melody is accompanied by lavish amounts of reverb and delay.

The guitar melody is a nice transition from one verse to the next. The verses consist of lush synth undertones to accompany Tatum’s guitar playing.

“Rheya” is the final song on the album and it is also the standout track. The guitar tones are drenched in reverb and chorus, which creates a swirling effect that makes them sound underwater.

The main guitar melody in this song is simple, but extremely memorable. Without the guitar effects, the guitar line might sound plain and unimpressive. However, the use of effects bring the dream-like notes to the forefront of the song.

“Nocturne” came out nearly 10 years ago, but is still relevant in the band’s catalogue and a must listen. Besides their first record, “Gemini” this is a perfect introduction to the band.