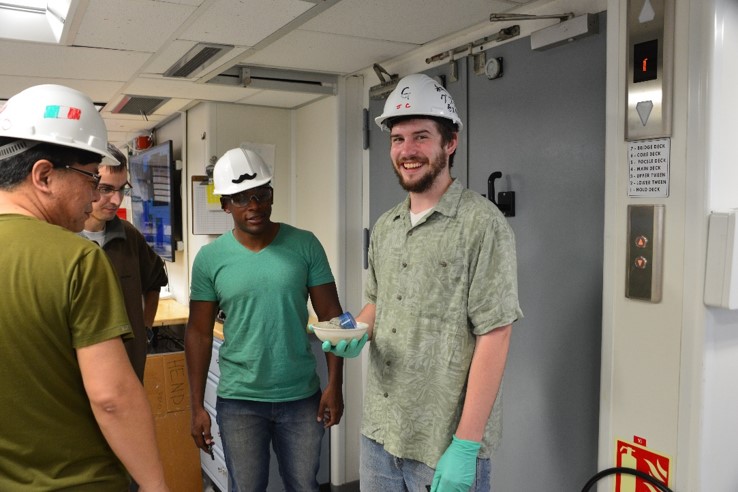 Courtesy of Jason Coenen Jason Coenen is a UWO alumnus that graduated in 2015 and is currently is apart of the IODP Expedition 392.

UW Oshkosh alumni and current Geology lab professor Jason Coenen is working on an ocean drilling project, and last Friday he delivered a talk about his experience.

Coenen said that he is working on numerous missions and expeditions around the world for analyses of sediments dating back to the Mesozoic era.

“I’m working on two sites as part of the International Ocean Discovery Program (IODP) Expedition 361,” Coenen said. “I have also been staffed to sail on IODP Expedition 392, which will go back south of Africa but has a goal of looking at sediments that are from before and after the event that led to the extinction of dinosaurs.”

Coenen said that all six sites he is working on are overseas in the region in the ocean South of Africa and between Mozambique and Madagascar.

Coenen was one of roughly 30 scientists in a cast of 130 staff members, and he is utilized for paleontology studies among the many subdisciplinary experts needed for such an expedition.

“In total the expedition had ~130 staff members. This ranges from cooks, to technicians, to doctors, to scientists,” he said. “In total 30 scientists are picked to sail based on a number of factors. Primarily scientists are staffed for paleontology, —what I sailed for— geochemistry, sedimentology and physical properties.”

Coenen also stated that the expeditions are just one portion of a long chain that leads from proposals all the way up to scientific publications used for educational purposes. He said that time tables vary and that there are a plethora of verification processes along the way.

“The expeditions themselves are proposals submitted by groups of scientists that have a target area and research questions,” Coenen said. “The expedition I went on from test site sampling/studies to proposal submission and acceptance was about 20 years. Typically it takes around four to five years for a bunch of the collaborative projects to reach their final stage.”

Coenen, a 2013 UWO graduate who got his Ph.D. at Northern Illinois University, states that a couple of projects he has been involved in are nearing the submission stage.

Although this may make it seem as if the work Coenen is involved in will be published soon, he stated that the reviewing and editing process can take another few months or years depending on the extensiveness of the documents and research.

“I’m close to getting papers submitted on the two sites I worked on,” he said. “I’m hoping to have one of the two out for submission by the end of this academic year. Depending on the journal it can take months to years for peer-review and final publication.”

As for Coenen’s favorite part of expeditions, like the one he is currently working on, he said that being a part of ocean drilling’s history and working around other like-minded individuals in the science field has been very exciting for him.

“It is an amazing experience to be part of the collection process and take part in the history of ocean drilling that is now at year 53,” Coenen said. “I really do think that the research task at hand, when we go out to collect this material, and the people you meet and collaborate with are some of the most interesting outcomes for international ocean drilling.”

“Get involved in research. While working on my Ph.D. I tried to give back in the sense of taking on undergraduate research mentees,” he said. “The IODP is always looking for ways to get younger scientists involved. They do a ship to shore program where a class, grade school up to college level, can zoom in and discuss the project and what scientists do/how they got involved.”