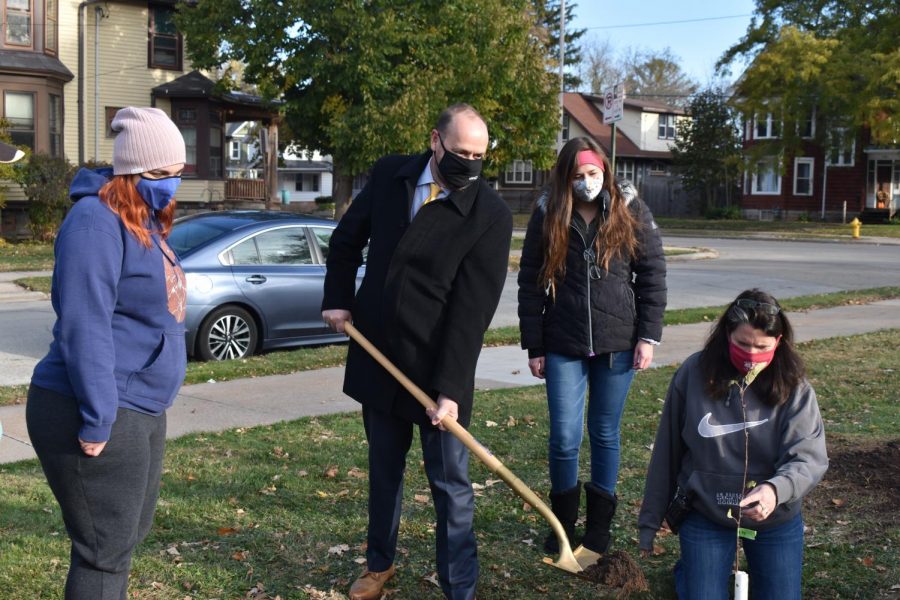 There were about 200 varieties of heirloom apple trees locally, but now there are only 18 left.

“These heirloom trees are almost extinct in Wisconsin,” Green Fund student chair Sarah Kleinschmidt said. “So by planting these trees here, we’re able to actually preserve some of that genetic DNA and bring those trees back to Wisconsin and hold the important piece of history that we thought was going to be gone forever.”

This Heirloom Apple Orchard project was proposed in spring 2019 by Jasmine Lopez of the Sustainable Solutions for Tomorrow club, and was approved for $2,414.

“The UWO Heirloom Apple Orchard will meet the UWO’s food production goals, food supply goals and education/collaboration goals,” the proposal stated. “This project supports the university’s sustainability goals, the university’s core value of sustainability and the vision of UWO as it pertains to ‘Enrichment and Leadership that emphasizes intellectual, civic, ethical, and personal development for students, faculty, and staff.’”

The proposal also said that the Heirloom Orchard would provide habitat for native arthropods, many of which serve as pollinators of wild and domesticated plants.

Dr. Marcel Dijkstra of the engineering technology department said that heirloom apples are not like the stereotypical ones you see at the grocery store.

“In a supermarket, we’ve got like 10 to 15 varieties and they all have the same characteristics: They’re crunchy, they’re sweet, they look good, they transport well, they keep forever and that’s basically it,” Dijkstra said.

“This one might have one flaw, and that it doesn’t look very good. I mean, it looks nice, but it doesn’t look like what people want in an apple. And so this variety is doomed until people are like, ‘I want something that tastes a little different than just my red delicious.’”

These trees are important to preserve because once its genetic material is gone, it’s gone, Dijkstra said. These trees have grown up when there were no pesticides, and that’s an important feature, that they can resist diseases.

“It’s certainly part of a comprehensive approach to the beautification and sustainability of the campuses,” Leavitt said. “That’s something that we take great pride in. It’s my understanding that there are very few of these particular species of trees that are left, and we’re going to help preserve them right here.”

The Green Fund hopes to eventually have the apples of these trees available to the campus to have students pick and enjoy themselves.