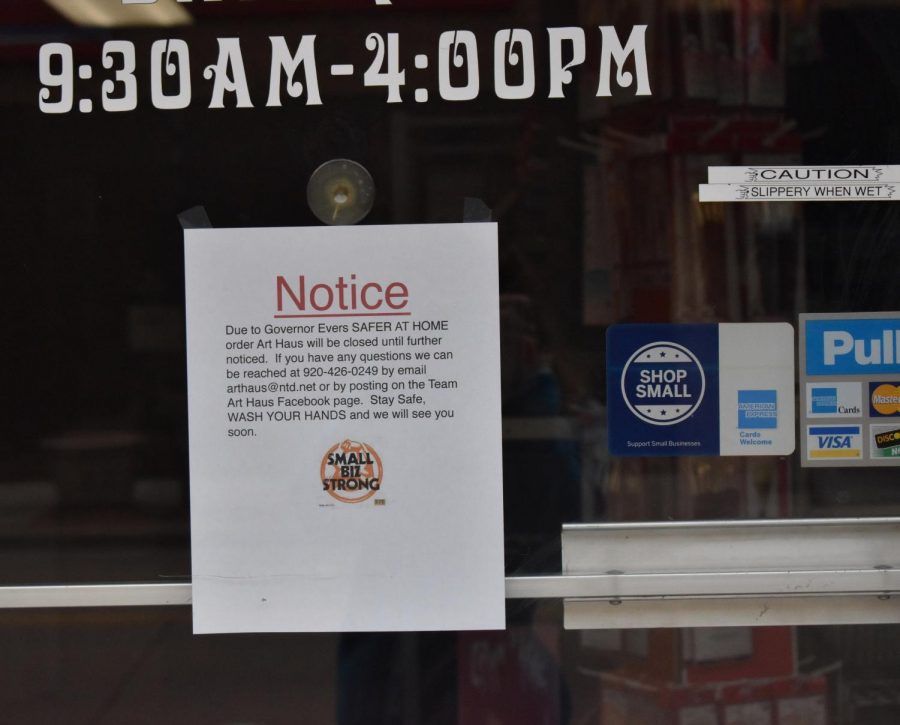 Signs of business closures due to COVID-19 are now common as Wisconsin sees a spike in unemployment claims. Allison Russotto/Advance Titan

The coronavirus pandemic has left workers in a state of disarray as steps to slow the spread of the virus have led to mass layoffs and a spike in unemployment applications in Wisconsin.

As schools switch to remote learning, nonessential businesses close, and dine-in services and mass gatherings are banned, unemployment claims in the state continue to mount.

Since March 15, there have been over 120,000 unemployment claims filed in the state, according to preliminary counts from the Wisconsin Department of Workforce Development.

For comparison, there were only about 10,000 unemployment claims filed over that same period last year, according to the DWD.

When the Oshkosh Area School District announced that it was closing beginning on March 16, Kobussen Buses was forced to lay off about 100 workers, according to Bronson Enli, terminal manager for Kobussen in Oshkosh.

The company laid off bus drivers and bus attendants to keep the company solvent as it has loans that need to be paid, Enli said.

With buses not running, a lack of cash flow is hurting Kobussen as about half of the school districts the company serves are still paying them, he added.

The company is compensating workers for one and a half hours’ worth of pay for each morning and afternoon route, which Enli said is less than employees were making.

“As soon as school opens back up again, whether it’s this year or next year, all of our current employees will be welcomed back,” he said, adding that until then, employees are encouraged to file for unemployment.

Another business impacted by school closures is A’viands, UW Oshkosh’s food supplier. After the campus announced that it would be sending students home and switching to online classes for the remainder of the semester, A’viands furloughed about 150 workers, according to Debbie Albert, an A’viands spokeswoman.

A’viands employees are compensated with accrued vacation pay and sick time, and if enrolled in the company’s benefits program, they will remain enrolled through April, she said in a written statement.

Albert added that benefits might be extended beyond April, as the company continues to monitor the situation and will update employees when the time comes.

While companies scramble to save their bottom line, workers have been left with overwhelming uncertainty.

Hailey Vadnais, a UWO student, worked at the Odyssey movie theater in Fond du Lac until the theater announced its closing upon considering guidelines from the CDC.

For Vadnais, losing her job on top of being unable to continue face-to-face classes has left her with no consistent routine.

She isn’t too concerned about losing her source of income because she lives at home with her family, but she’s worried about some of her co-workers.

“My co-workers are going to be hit hard by this,” she said. “Especially some of the older people who relied on the movie theater for their complete income.”

Beyond the movie theater, Wisconsin Dells resorts have been forced to close as a result of the pandemic, leaving workers unemployed.

One of those workers is Ellie Westedt, a high school senior from LaValle, Wisconsin, a town 21 miles away from Wisconsin Dells.

Westedt had planned to return to her summer job for the Wisconsin Dells Army Ducks, but the need for social distancing to slow the spread of COVID-19 has put a hamper on those plans. Without the summer income, she no longer plans to attend college in the fall.

“I have older parents, and I don’t want to spend their money or my money on college when I don’t think the economy’s going to be good coming out of this,” she said. “And I’m not going to be able to work as many hours in a higher paying job this summer to pay for college.”

Closer to home, Oshkosh resident Rachel Bays lost her job doing clerical work at a tax office in Menasha due to the pandemic.

On Monday, Bays learned that she was laid off by an employment service, rather than her employer. The loss of income has left her with a looming sense of financial insecurity.

Another Oshkosh resident currently out of work is Chad Bauldry, who works for a manufacturer in the area. Bauldry found out last week that his company would be enforcing a “quarantine layoff” until April 13.

The company is offering financial assistance to workers temporarily laid off; if anyone contracts COVID-19, the company will pay them while they stay home, he said.

Bouldry said the company told employees that they will qualify for unemployment during the layoff and that all employees have been given financial compensation.

He’s been off work since Monday. Bouldry doesn’t feel under too much financial pressure due to the compensation.

“I feel like by the end of the [temporary layoff], my wife and I will have the cleanest house in Winnebago County,” Bouldry said. “But so far, so good. I’m not going batty or anything.”

For those laid off without financial compensation, Forward Service Corp., a nonprofit with offices in 46 counties in Wisconsin, is looking to support workers through various programs, according to Director of Operations Brian Covey.

FSC is working with an array of partners across Winnebago County to connect workers resources, Covey said.

Since the coronavirus crisis started, the organization has seen a slight uptick in the number of people contacting them for services, he noted.

One program offered is Wisconsin Works, which provides cash assistance payments to adults with children under 18, Covey said.

Another program is Emergency Assistance, which helps adults with children under 18 who have eviction or utility notices keep the lights on and a roof over their heads, he added.

Covey said FSC will continue to help workers get back on their feet throughout the pandemic.

“We’re taking this [pandemic] seriously,” he said. “We’re still trying to support people who are getting their hours cut or have lost a job.”