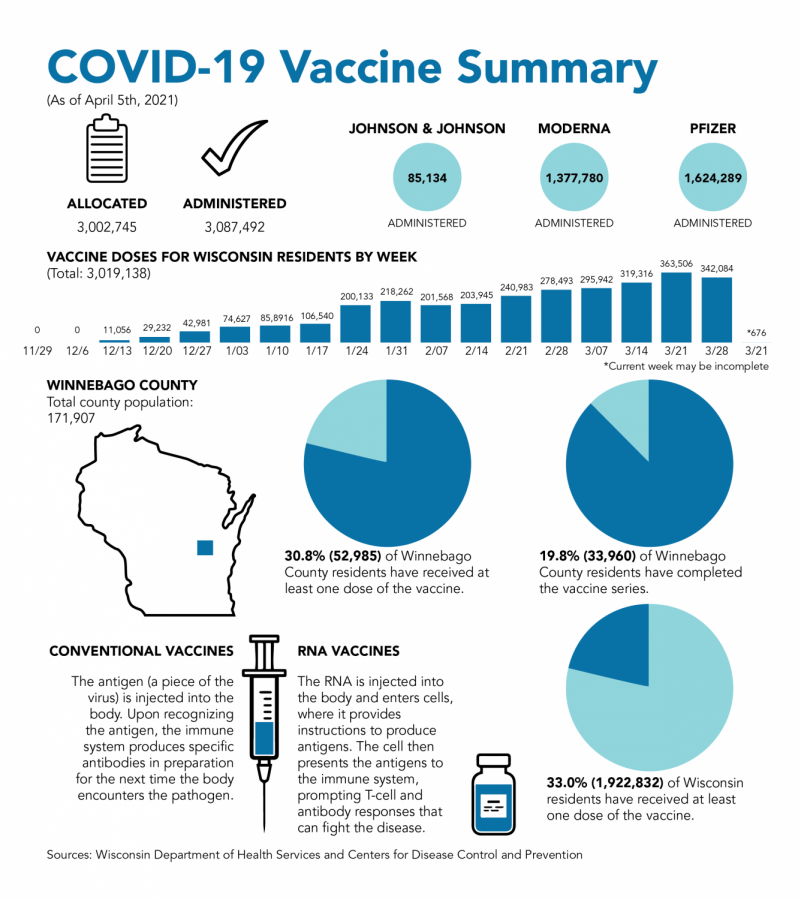 Once ranked one of the biggest COVID-19 case surge sites in the nation, Wisconsin is now among the leading states in the immunization race.

Wisconsin ranks second in the nation, only behind New Hampshire, for the percentage of distributed vaccines that have been administered. With one of the fastest vaccination rates, Wisconsin administered 93% of its vaccine doses as of Tuesday.

More than 20% of Wisconsin residents, roughly 1.17 million people, are fully vaccinated, according to the Wisconsin Department of Health Services (WDHS).

Over 3 million doses of the COVID-19 vaccine have been administered in the state, according to WDHS.

In Winnebago County, 20% of residences have completed the vaccine series, and 31% have received at least one dose of the vaccine.

Just a few months ago, Wisconsin was experiencing one of the fastest COVID-19 case surges in the nation, according to the New York Times.

The Oshkosh-Neenah area and Appleton remained at the top of the New York Times list for metro areas with the greatest number of new cases for most of September and October.

In November, Wisconsin’s COVID-19 case positivity rate peaked at 30%, making it the third worst state for case surges in the nation at the time.

Now the state has managed to turn around its fight against the pandemic for the better.

Everyone in Wisconsin ages 16 and older is currently eligible to get the COVID-19 vaccine at no cost.

UW Oshkosh students can schedule their vaccination appointment at uwosh.edu/titans-return/vaccination/