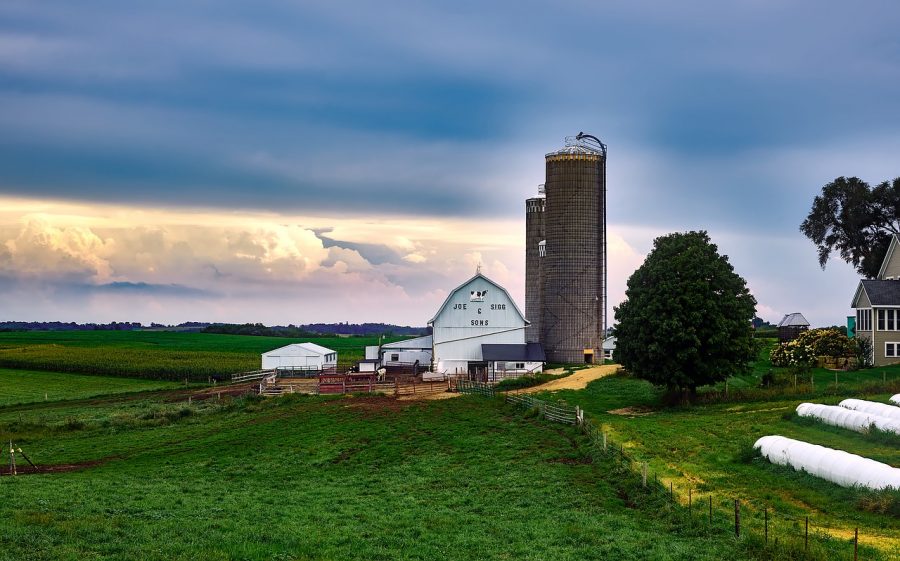 Wisconsin is widely known as the Dairy State, but that wasn’t always the case. Dairy farming has been a valuable Wisconsin industry since the late 1800s, according to the Wisconsin Historical Society. But the first generations of farmers considered wheat their main crop.

Dairy farming didn’t take root in Wisconsin until after the state’s wheat industry was threatened by soil exhaustion, insect infestation and competition from other states.

Considering these challenges associated with growing wheat, farmers began experimenting with different crops and found that feed crops, such as corn, oats and hay, were more suitable for Wisconsin’s climate and soil.

UW Oshkosh history lecturer Thomas Rowland said around Wisconsin’s period of statehood from 1848 to the 1880s, attempts were made to distribute dairy products, but those efforts were handicapped by certain problems.

“Without refrigeration, the various products became rancid quickly,” Rowland said. “In Chicago and Buffalo they referred to it as ‘Wisconsin Axle Grease,’ as that was all it was good for.”

Without an established demand from creameries and cheese factories in the area, the Wisconsin Dairymen’s Association, established in 1872, led the effort of convincing farmers to switch to dairy, according to the Wisconsin Historical Society website. Farmers had to substantially alter their practices and adapt to new technologies to accommodate the shift in agriculture.

In the 1880s, the Wisconsin dairy industry began to flourish with the use of ice-loaded railway cars and silage technology.

“Silos could store corn or silage that permitted the massive feeding of herds when the pastures were covered in snot,” Rowland said. “Moreover, this eliminated cows from getting into pasture areas filled with skunk grass, wild garlic and onion fields, which tainted the taste of milk.”

Railway cars could also be loaded with ice blocks harvested from Wisconsin lakes, which allowed for further distribution of dairy products. The University of Wisconsin was also a major contributor to the success of the state’s dairy industry because of their support through scientific research and development of the Babcock test.

“Stephen Babcock, an agricultural professor at Madison, developed the intricate butterfat milk test,” Rowland said. “It could determine how to distinguish between buttermilk and lesser grades of butter fat in milk.”

This shift in agriculture resulted in a rapid increase of dairy cows, and by 1899 they were being raised on more than 90% of Wisconsin farms, according to the Wisconsin Historical Society website.

By 1915, Wisconsin had become the leading dairy state in the U.S., producing more butter and cheese than any other state. Union Star in Fremont, formed in 1911, is one of the first cheese factories in Wisconsin that is still operational today.

Since Wisconsin became the first state to grade its cheese for quality in 1921, this leadership role in quality assurance as well as Union Star’s central location for distribution, helped Wisconsin become the nation’s cheese state.

“In the 1920s and ’30s, [Union Star] was a pretty large factory relative to the rest of the industry,” Union Star owner Dave Metzig said. “In 1950, there were still 25 cheese factories in Winnebago County and then gradually with more automation, better highways and bigger trucks, the industry got consolidated.”

“We mostly survived over our retail business, and now we are considered more of a microbrewery compared to a large automatic cheese factory,” Metzig said.

Union Star purchases their milk from local farms and workers make the cheese directly in the store. In the 1980s, Union Star primarily produced cheddar cheese and gradually expanded to the 200 various products they sell today including string cheese, monterey jack, colby and their infamous cheese curds.

Knigge Farms in Omro further revolutionized the dairy industry in Wisconsin and the U.S. by being the first farm in the nation to install a robotic milking system 20 years ago.

With this technology, cows are able to milk themselves automatically, 24 hours a day, without the presence of a farmer.

“Farmers without our technology will spend three to four hours per day actually milking cows,” Knigge Farms owner Pete Knigge said. “It allows somebody who’s in their mid-70s to continue to help operate and manage the farm.”

The automatic milker also records data of the cows, helping farmers keep track of their health and outputs.

“The computer will mark cows that are out of the norm for her or the herd,” Knigge said. “It tells us if her milk production, milk composition, activity, rumination or other values have changed and should she be checked.”

While the dairy industry is a valuable aspect of Wisconsin agriculture, it faces many challenges with the most recent being market fluctuations.

“The prices we receive and pay go up and down dramatically and it really drives us crazy that when COVID struck, prices dropped 25-30%,” Knigge said. “Some farmers had to dump their milk because the processor couldn’t take it.”

One of the challenges Union Star has faced is intense regulations, though they have been able to keep up with the changes. “There’s always the possibility that a new regulation will put us out of business, but it hasn’t happened yet,” Metzig said.

Today, Wisconsin is home to more than 7,000 dairy farms and 1.28 million dairy cows, according to the Wisconsin Department of Agriculture, Trade and Consumer Protection.

“Ten years ago there were 11,000, so we’ve lost about 30% of the number of dairy farms in the state, but the number of cows has stayed about the same,” Knigge said.

Despite this decline in dairy farms, the overall value of the Wisconsin dairy industry continues to increase.

“Wisconsin still produces more cheese than any other state in the U.S.,” Knigge said. “California makes a little more milk than we do, but they don’t put all their milk into cheese like we do.”

“Farming is a challenging industry, but it’s a very rewarding industry,” Knigge said. “We get to see the results of our management and labor, whether we grow a good crop or have a nice calf born that grows up to be a productive cow.”

Knigge said he is grateful for Wisconsinites eating so much cheese and dairy products.

“Thanks everyone for putting extra cheese on your pizza and eating as much cheese as you do,” Knigge said. “It helps keep the Wisconsin dairy industry strong.”