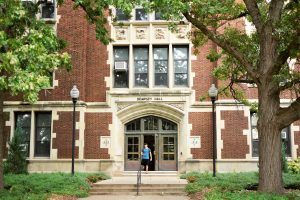 Over the past 100 years, Dempsey Hall has been at the center of UW Oshkosh’s biggest moments, including protests, multiple arrests and a disastrous fire.

A special exhibit, which is set up in the UWO Archives & Area Research Center provided more insight on Dempsey’s history.

The original Dempsey Hall caught fire on March 22, 1916 and was completely destroyed, according to the exhibit.

The exhibit stated, “This fire destroyed all such essential features of the school as classrooms, auditorium, library, laboratories, locker rooms and offices.”

As stated in the exhibit, Dempsey’s original purpose was to help accommodate the expanding student population.

“Planned in 1914 as a science and administration building for the growing Oshkosh State Normal School, construction officially began in October of 1915,” the exhibit reads.

The exhibit goes into detail on the original plan for Dempsey. 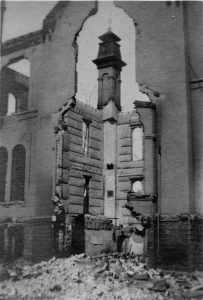 “Before the fire, the intention was to connect a new structure to the original building while slowly demolishing much of the older structure,” the exhibit stated.

“Known as the Main Building for its first 35 years, the building was officially renamed Dempsey Hall in 1952 in honor of local regent, Edward Dempsey,” the exhibit reads.

The exhibit also mentions how the Main Building, was important.

“A devastating 1916 fire that destroyed the previous Normal School building made the new building vital to the decimated campus,” the exhibit stated.

“The Dempsey we see today was planned on sitting in front of the original Main Building,” Ranger said. “When you look at pictures of the fire, you can actually see the foundation of Dempsey Hall already being completed that fall. And they were going to build that building that coming summer.”

According to the book “History of the Wisconsin State Universities, 1866-1968,” written by Walker D. Wyman, Edward Dempsey was a notable alumnus who had a major role in the affairs for the Oshkosh School.

“He served as President of the State Bar Association from 1928 to 1929, and was a member of the Normal School Board of Regents from 1914 to 1946. Dempsey was Board President for twenty years.”

According to the special exhibit, Dempsey was built in three different phases.

“The original structure was completed in 1917 with a library built the next year,” Ranger said. “A final administrative addition was finished in 1969. For over 50 years, the north east corner of the building remained unfinished and for many years hosted a tennis court.”

When the campus transitioned from a teacher’s school to a public university, more offices were needed to accommodate the growing administrative needs, Ranger said.

“For example, when Harrington Hall became the campus science building in the 1930’s, those classrooms left Dempsey for that building and Dempsey’s classrooms were used for other classes,” Ranger said. “Cubicles in Dempsey’s hallways became offices due to lack of space. And when Polk opened in 1962, the library in Dempsey became an art gallery.” 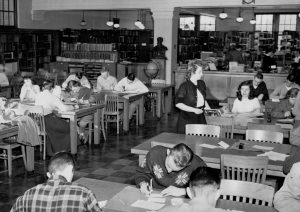 The transition from a teacher’s school to a public university occurred sometime in the 1960’s, according to Professor Stephen Kercher, who is chair of the history department on campus.

“In the 1960’s, you had a huge increase in college-aged students, which was due to the baby boom years prior,” Kercher said.

Also, according to Kercher, the original plan for UWO was to become a rival for the University of Wisconsin Madison.

“At the time, Oshkosh was one of the largest, fastest growing universities in the Midwest,” Kercher said. “And that’s when most of our buildings were built.”

Oshkosh was integrated into the UW System in the 70s, according to Kercher.

The Dempsey Hall fire and the transition were not the only big events campus saw. On Nov. 20, 1968, the most disruptive day in campus history occurred, Kercher said.

“The term disruptive is putting it mildly,” Kercher said.

According to the archives, “Black Thursday was an event where a large number of African American students stormed the office of the University’s president, which was in Dempsey Hall.”

According to a website dedicated to Black Thursday, posted by the archives, many of the students were angry due to the rising racial tensions that occurred in the 60s, along with mistreatment from professors and coaches.

The archives go into more detail on the treatment of African American students.

“Responding to mounting concerns over housing discrimination in Oshkosh, the harassment of black students in campus dormitories, and fair grading policies, as well as the shared desire to press the campus administration for courses in African American history and literature, several dozen black WSU-O students organized the first Black Student Union (BSU) in the state of Wisconsin in February 1968,” according to the Black Thursday website.

“Over a hundred black students showed up at the office and 94 students were arrested due to the destructive vandalism that had occurred,” Kercher said. “These students were later expelled.”

According to Kercher, this caused national attention. People in Madison were far more upset about the treatment towards the African American students than Oshkosh students were, according to the archives.

“White students at WSU-O—until this time relatively quiet when compared to their protesting counterparts at the UW Madison campus 75 miles to the southwest—students awoke to the reality of racial injustice and suddenly felt compelled to speak out against the way the Oshkosh 94 were treated,” according to the Black Thursday website.

Ranger went into further detail after being asked why people in Madison were more upset than people in Oshkosh.

“Madison attracted many different sorts of students drawn from across the state, country and world,” Ranger said.

Ranger said the reason that WSU-O students didn’t protest the expulsions was probably due to the fact Oshkosh was a smaller community than Madison.

“WSU-Oshkosh then drew mostly from northeastern Wisconsin communities where civil rights issues perhaps had not yet been something kids grew up hearing about,” Ranger said. “They might have felt less freedom to become political being so close to home.”

According to the archives exhibit, even with disruptive events such as Black Thursday, Dempsey still stands.

“Dempsey’s designers, famed Milwaukee architects Henry Van Ryn and Gerrit DeGelleke, would not be surprised to hear of its century of service,” archives said. “The building, they said, will stand here indefinitely and it would have to be battered down with cannonballs to be destroyed.”

“Dempsey today, serves as the nerve center of the university,” Kercher said. “It served many different offices and is always changing. To me, Dempsey is a landmark that symbolizes the university’s ties to the past. It’s a place of identity.”

Ranger also gave some insight as why Dempsey should be considered important.

“It’s important because the building connects us to our origins as a school,” Ranger said. “Dempsey reminds us of earliest years when we were a small school dedicated to doing just one thing, training teachers. Pull back from that spot and you’ll see all we’ve become.”

Dempsey is not only known for holding many administrative offices, it helps students as well, according to Ranger.

“It has been used for so many purposes over the years,” Ranger said. “Today, students might go months and months without entering, but for a long time it really was integral to their lives.”

UWO sophomore Jake Wallner, who works in the Dean of Students office, said Dempsey is a great student resource.

“I started working here during my freshman year, and Dempsey has helped me a lot,” Wallner said. “Without it, I would have been too scared to ask for help.”

Wallner said that the Dean of Students office is the place to get help. Not only does it assist with disability services, but it also helps with conduct and late class drops. Overall, it’s here to help students.

As Dempsey celebrates its centennial, Professor Kercher reminds us of an important lesson from Dempsey’s history.

“It gives us the opportunity to look back at Oshkosh’s history and the progress,” Kercher said.