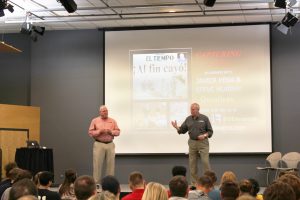 Pena and Murphy were part of the manhunt to track down the notorious drug kingpin Pablo Escobar and shared their side of the story with UWO students as compared to their Netflix personas.

The agents began by explaining how they got involved with the manhunt separately and what really happened during their operations as compared to “Narcos” reminding students that, although the topic could be dark, people needed to know the truth.

“What we want to do tonight is tell the true story about Pablo Escobar,” Murphy said. “Not what you might see in ‘Narcos,’ not what you might have read in a book. We want to tell you how one man, so powerful, so wealthy, so greedy, so egotistical that he declared war on his country two different times.”

Murphy also touched on the topic of the current drug epidemic, when a student asked him about how taking down Escobar has helped in today’s society, both with other “Narcos” as well as the drug epidemic in general.

“We cannot, as a country, arrest our way out of a drug problem,” Murphy said. “We have to come up with a better system. Our opinion is that we need to attack this from a demand level because it’s the basic levels of economics.”

Pena said the best way to end the epidemic is to target the demand of drugs, which can be complicated as well because there is no sure fire way to do so.

“As long as there is a demand of anything there are equal people in the world who provide that supply,” Pena said. “How do we attack the demand? We’re the leading consumer in illegal narcotics in the entire world. It’s sad, but how do we do it?”

Students who attended the speaker event ranged in how much they actually knew about the Netflix show. UWO junior Emilia Callejon said she had an average amount of knowledge but coming to the event was more about fact-checking the show.

“I started watching the show originally and then started doing some readings online,” Callejon said. “I wanted to see what was true because so much of the show is overdramatized.”

UWO senior Vince Platten said he came to the event with little knowledge of what the show was about besides hearing comments from friends and he said his mind was blown after hearing all about Escobar.

“I knew it was a show about Pablo Escobar, but I’ve never watched it,” Platten said. “I didn’t really know much about the show, but I looked up a little background. Before I watched the show I wanted to see the real people and see who exactly is all involved. The sheer size of him [Pablo Escobar] was as a whole, that was just super shocking to me.”

University Speaker Series member Matilda Cretens said she finds it odd the story of the Narcos are not taught in schools, considering the events happened not too long ago and tie into what is happening today.

“I think the fact that we don’t learn anything about this in history or high school is just crazy,” Cretens said. “Even though it’s not like super in the past, it’s recent enough that where we should have heard at least something about it. I know that it’s about drugs and they may not necessarily want to talk about that in school, it surprised me that I’ve never heard anything in all seriousness until I came tonight.”