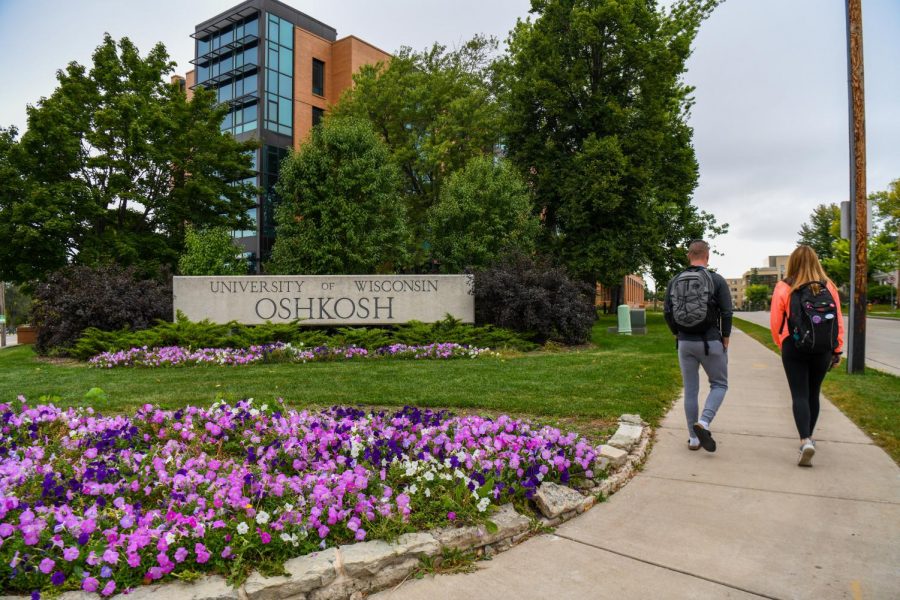 On July 1 UW Oshkosh, Fond du Lac and Fox Valley officially merged. Pictured above are students walking on the three campuses that became one University.

The University of Wisconsin Oshkosh and its satellite campuses, UW-Fond du Lac and UW-Fox Valley, await decision on a new name as the merging of the three campuses into one University began on July 1.

Chancellor Andrew Leavitt said under the recommendation of the naming committee, the campus has decided that UW-Fond du Lac and UW-Fox Valley keep their names with a slight modification.

“So UW-Fond du Lac is now a campus of UW Oshkosh,” Leavitt said. “That’s the tagline underneath it; it used to say a campus of UW-Colleges. So their logos have gone from red to black to signify they are definitely in transition.”

Leavitt said UWO is engaged in a marketing study to understand the position of the University in the region.

“We’ll be asking some questions about what will our identity and brand be so that we can begin to understand that,” Leavitt said.

Leavitt said they won’t have an official decision on the University’s name until spring. The campus is considering a few options. One would be having three campuses all called the University of Wisconsin Oshkosh. Another option is considering changing the name of the entire institution. And the third option is what other joining schools in the state did, which is to extend their receiving institution of the brand onto other campuses.

“For instance, we now have UW-Stevens Point at Wausau and there’s UW-Milwaukee at Waukesha,” Leavitt said. “So that’s certainly one we could explore.”

Leavitt said all campuses will keep their colors and mascots for the purposes of athletic competition.

Leavitt said this decision was made in order to respect the traditions of the individual campuses.

“We would have six basketball teams in this region all with the name ‘Titan,’” Leavitt said. “It would be very confusing. So the UW Oshkosh Titans is preserved for the NCAA athletics, which resides on the Oshkosh campus.”

Assistant Chancellor for Access Campuses Martin Rudd said he liked the idea of having all the teams with the name Titan; he, however agreed with Leavitt that it could be confusing.

“It’s a sort of rallying point for the whole University and the chancellor said early on that the success of this new relationship within our new University deals with the cultural identity of the access campuses and the UW Oshkosh campus,” Rudd said.

Leavitt said it will be several years until the campuses are completely integrated. Within the next two to three years, decisions on policies and procedures will be made as well as decisions on aligning campus curriculum, calendars and commencement ceremonies.

“And it’s going to take a lot more time for us to be integrated; that’s a cultural issue,” Leavitt said. “It will require the next generation of students before we really feel as if we are one University simply because anybody that has any institutional memory of the previous arrangement carries that with them.”

Leavitt said one important detail they are looking into with the merger is the ability for students to transport between the three campuses at their choosing.

“We are not creating situations where students must commute, simply because that was an agreement up front,” Leavitt said. “So we would not say the class is only offered on one campus but not the other.”

Leavitt said funds, budgets and finances are not being blended across campuses at this point.

“They are being kept absolutely separate this year,” Leavitt said.

Leavitt said that by July 1, 2019 the fiscal arrangement will be different, but they don’t know exactly what it will look like.

“So the resource challenges we have on the Oshkosh campus have no impact on what’s happening on the access campuses and vice versa; they’re not without their own budget issues on the access campuses, and they’re tied directly to enrollment just as ours are,” Leavitt said. “So they’re being tied separately, and I never want to have the situation where we’re using one campus to offset the issues of another campus; that’s just not right.”

Rudd said over the course of the last six months he’s learned about the fiscal transformation at the Oshkosh campus.

“A couple things to note; before the restructuring even immensed, the access campuses were already planning for the 18-19 budget,” Rudd said. “So the budget this year of course will remain separate because we already planned that budget before restructuring had even been announced.”

Rudd said for 2020, the Oshkosh campus will continue the reductions of about $9.5 million and the access campuses will look into managing their own financial situations.

“These are really complex budgets and to some extent the UW system has not fully released the funding for what’s due to come for the restructuring either,” Rudd said. “So the financial picture is not fully clear yet for the access campuses.”

“I know that the enrollments on the UW-Fox and UW-Fond du Lac campuses are stable, it’s a question of how far up or down they might be,” Leavitt said. “We’ll know by Sept. 14 officially what the exact enrollment trends are on each campus.”

Leavitt said the overall enrollment will be down again this year, somewhere around two to three percent.

“We expected this, we have modeled this,” Leavitt said. “We know that we probably have one more year of a declining enrollment for the overall population for the Oshkosh campus and that will be fall of ‘19.”

UWO senior Aaron Wojciechowski said he is skeptical about the effects of the merger on the University.

“The two big issues that campuses across Wisconsin are facing are funding and declining student enrollment,” Wojciechowski said.

Wojciechowski said these issues are a result of policies at the state level, such as not funding the tuition freeze which affects both two-and four-year institutions.

“Young people and experienced professionals are also leaving the state in search of states that actually appreciate its educators and education, and one that actually pays a decent livable wage,” Wojciechowski said. “These are issues that won’t be solved or addressed by the merger.”

Rudd said informing the campuses about the restructuring comes from several different sources, including himself. The UW System also sends weekly updates through the Project Management Office that are posted online and there are monthly all-campus collegiums.

“Students from our access campuses also serve on some of the working groups,” Rudd said. “Chancellor Leavitt has already held ‘Coffee with the Chancellor’ at the FDL campus this semester, in the same way he did last week at the Osh[kosh] campus.”

Fond du Lac student Jonathan Kroeger said he felt he wasn’t very informed about the merger; however, he said Leavitt came to the Fond du Lac campus to talk to students.

“The only thing you heard in class about it was if teachers were complaining, but as far as academically and financially, I knew we were going to keep the same tuition, which is lower than Oshkosh, so that’s why it was good, because if we wouldn’t of I obviously would have transferred to Oshkosh,” Kroeger said.

Leavitt said July 1 was a historic day and that he’s thrilled by the involvement of people on all the campuses and by student governments.

“I’ve talked a lot in the business community about this new university and I’ve asked a sort of rhetorical question, and the question is; what kind of a university does this region need and deserve?” Leavitt said. “So we have an opportunity, because of the merger, to rethink how we are going to best serve the northeast Wisconsin region and beyond.”