Who will be the new vice chancellor, provost? 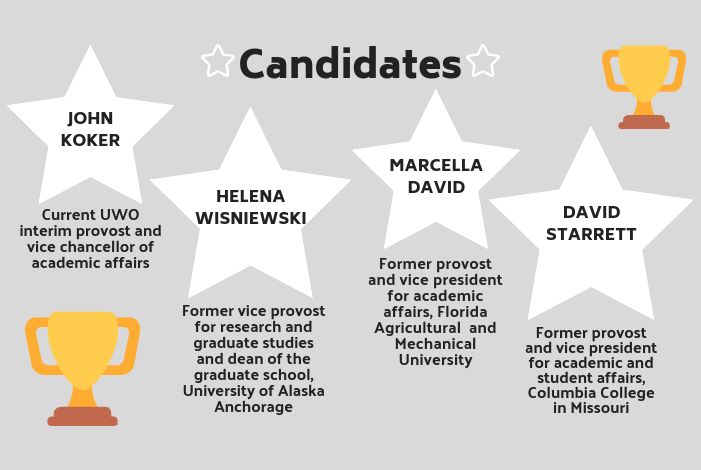 After the University spent the past two weeks meeting with the four finalists in interviews and open forums, a new provost and vice chancellor of academic affairs at UW Oshkosh is expected to be announced within two weeks.

According to the position description, responsibilities of the provost and vice chancellor of academic affairs include leading the development and implementation of the strategic plan and initiatives, leading the strategic resource allocation process and ensuring it is aligned with the University’s mission and priorities and overseeing all academic and administrative policy development, adoption and implementation.

Leavitt said despite their differences, the finalists are similar in that they are all accomplished.

“All of them come from very different places, but at the same time show a great body of work, which would serve them well in this role of provost and vice chancellor,” Leavitt said. “I really have enjoyed the level of experience and the collegiality that each of them bring.”

The open forums, which were held in Sage Hall, were open to all University faculty, staff and students. Finalists presented briefly on topics of their choosing and opened the floor for questions. Forums were also held at the UW-Fond du Lac and UW-Fox Valley campuses.

Staff from all three campuses were also involved in the search and screen committee, according to the committee’s chair, Kelli Saginak.

“We’ve worked together on this search as three campuses, one University,” Saginak said. “I think that this particular search is probably the very first big collaboration that we’ve done across the three campuses.”

Leavitt said the decision to have all three campuses involved was made before the merger took effect.

“We started this process long before we were merged with the UW-Fox and UW-Fond du Lac,” he said. “We made the commitment then, Kelli and I together, that we would include representation from those campuses even though they were not a part of this University.”

That decision has paid off, Leavitt said, with both the Fox Valley and Fond du Lac campuses being very engaged in the search process.

“I think we’re going to get a better result because of the collaboration,” he said.

Senior Carson Werlein, who transferred to UWO from UW-Fox Valley, said they’re glad the two campuses were able play a role in this process.

“I think it’s great that Chancellor Leavitt and Kelli Saginak had the forethought to include the [access] campus’ staff in their search,” Werlein said. “It’s a great example of leadership by working together so that we can get the best candidates who feel like they belong.”

According to Saginak, the recruiting process was set in motion last semester and was led by Witt Kieffer, a Chicago-based executive search consulting firm.

After that, the committee drafted the position description and a rubric for reviewing applicant files.

Saginak said the firm then began an intensive search for qualified professionals, resulting in a “a very rich and diverse pool of applicants.”

“Once we broke for summer, the entire search was in the hands of the search committee and they went to work on the ad strategy. I think they said [there were] over 2,000 files that they went through and hundreds of people who they contacted.”

These applicants were then reviewed at the end of August by the 18-member search and screen committee, which narrowed the pool down to eight semifinalists, Saginak said. The committee conducted video conferences with each of the semifinalists; Leavitt was also involved in those interviews in a separate room.

“At the end of the weekend, we had four finalists,” Saginak said.

Saginak said though she’s relieved the search and screen process is coming to an end, she’s glad to have been a part of it.
“It’s just been very rewarding and energizing,” she said.