50 years of history in the making 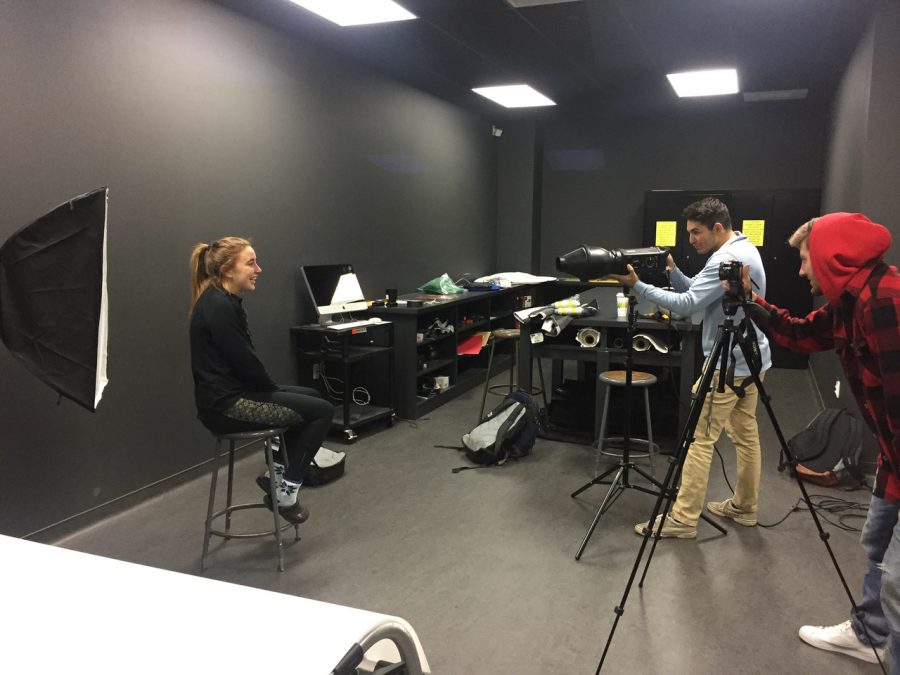 "Christina Basken/Advance-Titan UWO student Hannah Thorn poses for students Eli Miller and Lance Gulotta who are working on a multimedia project for class."

Home is where the heart is. No one department at the University of Wisconsin Oshkosh knows that better than the Department of Journalism.

In five decades, the journalism department has had five different homes: a house in front of Reeve Memorial Union, which is now a parking lot; a building behind Clow Hall, which is now also a parking lot; the basement of Radford Hall; Clow Classroom; and finally, the third floor of Sage, where it is still housed today.

The department was started with one purpose: to train newspaper reporters. But it has continually updated its programs and majors, and today offers a major in Public Relations and a major in journalism. The journalism major also includes emphases in multimedia journalism, which is new this year, as well as advertising and media studies. And advertising will soon be another major offered, although it will take two years to get the major approved,
Since the Department was established in 1968, it has graduated more than 2,800 students.

“You know, you don’t want to be too close to anybody if you’re a journalist,” Coll said. “You want to be able to be independent and objective. You won’t want others looking over your shoulder all the time as that might put pressure on you. So, it was a succession of buildings and we were always trying to be on our own and develop our own classrooms, our own reading room, and things like that.”

Today, the UWO Department of Journalism has a main office, a reading room, a journalism computer lab, a scanning lab, two graphics labs, a photo studio, a journalism workroom and offices for its 11 faculty and staff members.

The Advance-Titan, the department’s oldest student organization, was founded in 1894 as the Normal Advance and switched its name to The Advance-Titan in 1967. Since its establishment, the department has founded four other clubs: Advertising Club, Photo Club, the Dr. Julie Henderson Public Relations Student Society of America and the Society of Professional Journalists. In addition, it also has a chapter of Kappa Tau Alpha, a national society that honors achievement in journalism.

Coll said the department continually adapted to the times, bringing new technology into the curriculum as it was developed, including electric typewriters, Tandy Radio Shack-80 computers and iMac computers, as well as changes in computer software. It also made the transition from film photography, using a dark room to develop photos, to digital photography.

“We developed new classes, got people to teach those parts of the program and formed student organizations: news, advertising and public relations,” Coll said. “It just kind of grew from there until now. Our form now is to have a number of sequences for students to go out and do journalistic achievement in a number of areas.”

Coll said he also saw rough times within the media sphere during his career, similar to today’s era of fake news.

“What we do is often not popular… I mean you’re giving the secrets away,” Coll said. “And you’re empowering people to know a little bit about their lives and portraying for them a pretty good representation of what’s going on out there, and I think people in positions of authority have always resented that.”

Coll summarizes the journalism realm with the classic quote from Mr. Dooley, a fictional 19th century Irish bartender: “The job of the newspaper is to comfort the afflicted and afflict the comfortable.”