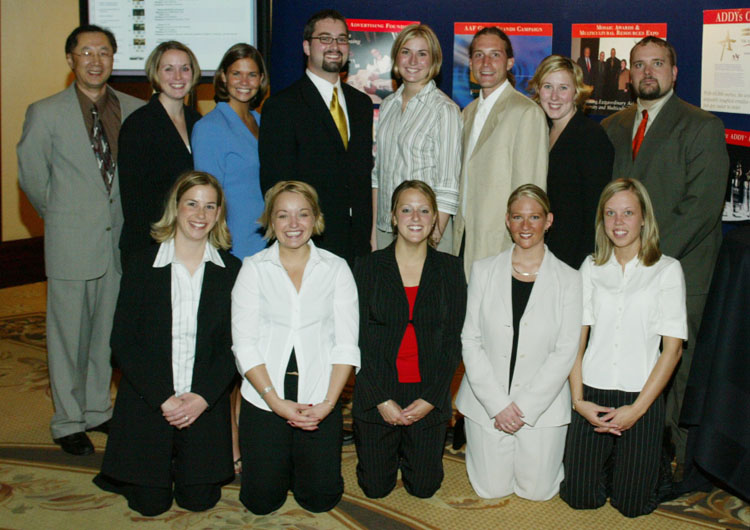 Courtesy of the Journalism Department

The UW Oshkosh team at nationals in 2003 with then-adviser James Tsao, far left.

Getting practical experience and networking are two key factors in getting a job after graduation. The UW Oshkosh Advertising Club exists to help students within the Department of Journalism do both.

“It had combined both public relations majors and advertising majors, neither of which were truly majors because there was only one major then — journalism.”

Biglow said PRISM students competed in the National Student Advertising Competition a few times before he arrived on campus. Today, it’s rare to have students in the Ad Club who aren’t participating in NSAC in some way.

Biglow served as faculty adviser of Ad Club for about 10 years, and then James Tsao, now chairman of the advertising department at Syracuse University, took over as adviser.

“The Ad Club was actively involved in NSAC when I was the faculty adviser,” Tsao said. “The club participated and won at least twice in the NSAC district competition while I was the department chair.”

Ad students finished 10th in the American Advertising Federation’s NSAC competition in 1996, becoming the first team from UW Oshkosh to finish in the top 10 nationally. Four of the five presenters would later be selected by the University as Outstanding Young Alumni: Anne (Angoli) Enright, Jeff Maki, Chuck Monn and Mike Fredrick. Ad students have continued with regional wins over the years, with the most recent being third place in 2017.

Being part of the NSAC team is one of the most important things advertising and other journalism students can do while they’re in school. But it is also one of the hardest classes a journalism student can take because of the sheer volume of work and dedication required.

“If you’re not a member of the NSAC ad competition team, but you want to be in the advertising field, you obviously don’t want a job bad enough,” said alumnus Jeff Griffith, a member of the team from 1983-87 who now owns his own agency in New York. “The ad competition is the best learning experience you’ll ever get in college shy of working in an actual company/agency or having your own freelance clients.

“You will learn how to work together with your peers, creative-minded people, marketing-minded people, clueless people, a group of people with differing opinions and ideas, with real deadlines, with real successes and failures and time crunches and real-life exhaustion,” Griffith said. “Nothing is better.”

Calli Hoyt, who graduated in 2014 with a bachelor’s degree in journalism and dual emphases in advertising and visual media, agreed. She currently works as a copywriter for McGarryBowen in Chicago, representing brands like Blue Cross Blue Shield, Walt Disney and the United States Tennis Association.

She said the practical experience students gain through NSAC is invaluable in getting a job.

“It’s the closest experience students have to gaining real-world experience while in school,” Hoyt said. “The work, concept development, strategizing and deadlines really mirror the process of how an agency works.”

Not only does the class take you through the process of how an agency works, but it’s also a lesson in working and collaborating with others, she said.

“Was it a ton of work? Yes. Was it stressful? Absolutely. But did we all end up with a campaign that we were incredibly proud of? 100 percent,” Hoyt said.

The Ad Club has always varied in terms of success, participation and progress over the years, but Sara Steffes Hansen, current faculty adviser, associate journalism professor and department chair, said the club is still progressing to this day.

“Every year, Ad Club builds on the successes of previous years,” she said. “Typically, Ad Club varies in the number of participating students. However, its progress has been evident in providing professional experiences for students — guest speakers, agency tours and design or other professional training — that make a difference.”

Ad Club is open to all majors who have any interest or love toward advertising, President Whitney Wender said. Typical activities include hosting guest speakers or professional development activities, going on ad agency tours or creating logos for clients. Meetings are held every Wednesday at 5 p.m. in the Department of Journalism, which is located on the third floor of Sage Hall.