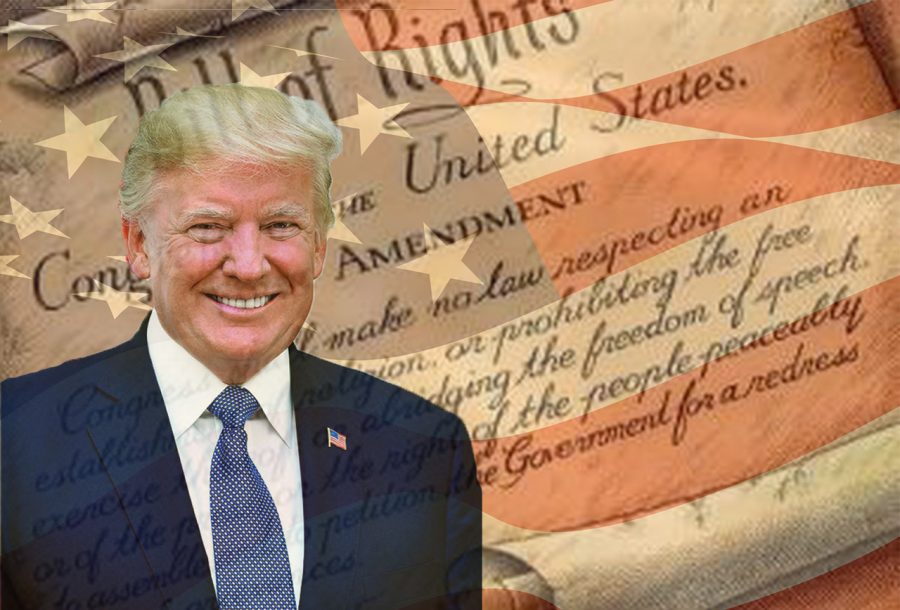 PEN America, represented by the nonpartisan, nonprofit Protect Democracy and the Yale School Media Freedom and Information Access Clinic, filed a lawsuit in federal court against the president of the United States on Oct. 16.

According to PEN America, the suit seeks to stop President Donald Trump from using the machinery of government to retaliate or threaten reprisals against journalists and media outlets for coverage he dislikes.

PEN America is a registered 501(c)(3) organization with a community of over 7,200 novelists, journalists and publishers with the mission to “protect free expression in the United States and worldwide…to unite writers and their allies to celebrate creative expression and defend the liberties that make it possible.”

According to PEN Charter 1948, PEN declares for a free press and opposes arbitrary censorship. It believes that the necessary advance of the world toward a more highly organized political and economic order renders free criticism of governments, administrations and institutions imperative.

According to the complaint for declaratory and injunctive relief, “President Trump has First Amendment rights and is free to criticize the press vehemently, but he is not free to use the power and authority of the United States government to punish and stifle it.”

Incidents cited in the complaint from PEN America include Trump personally lobbying the U.S. Postal Service to increase the shipping rate for Amazon.com parcels because he does not like the way he is covered in the Washington Post, which is owned by Amazon’s CEO Jeff Bezos. Trump’s threats of government action alone caused a pronounced dip in Amazon’s stock value in July 2018.

In 2016, when Trump learned that CNN’s parent company, Time Warner, planned to merge with AT&T, he publicly threatened to use the Justice Department’s antitrust merger review process to retaliate against CNN for its news coverage he was not in favor of.

In the complaint they touched on the importance of the First Amendment by referencing Benjamin Franklin who identified freedom of speech as the “principal pillar” of a free society and the primary bulwark against tyranny. A leader with “the power to punish for words,” he wrote, “would be armed with a weapon the most destructive and terrible.”

According to the complaint, “President Trump has directed his threats and retaliatory actions at specific outlets whose content and viewpoints he views as hostile,” the complaint continues. “As a result, journalists who report on the president or his administration reasonably believe they face a credible threat of government retaliation for carrying out the duties of their profession. President Trump has thus intentionally hung a sword of Damocles over the heads of countless writers, journalists and media entities.”

PEN America seeks a remedy for the president’s unconstitutional actions aimed at suppressing speech. “It seeks the entry of an Order (a) declaring that Defendant Trump’s retaliatory acts violate the First Amendment, and (b) enjoining Defendant Trump from directing any officer, employee, agency or other agent or instrumentality of the United States government to take any action against any person or entity in retaliation for speech that the President or his Administration do not like.”

UWO communication studies professor and faculty advisor for the American Democracy Project, Anthony Palmeri, said Trump violates the first amendment when he moves forward on threats against the press.

“Like any citizen, President Trump has the First Amendment right to be critical of the free press,” Palmeri said. “He abuses that right when he moves from mere criticism to making and sometimes following through on active threats.”

“The First Amendment protections of free speech and free press are necessary in order to hold our government accountable,” Palmeri said. “While presidents have always had rocky relationships with the press, President Trump is unique in the way he not only calls journalists he does not like ‘the enemies of the people,’ but he seems more than willing to do what he can to silence them. This is a disturbing fact of the Trump presidency that all lovers of liberty, regardless of their political affiliations, should renounce.”

“Based on the article and what we’ve been seeing since President Trump first announced he was running for president is a lack of compassion and respect for our free press and journalists,” Wojciechowski said. “I’ve seen multiple verbal attacks on journalists trying to do their job and find the truth to important questions. I think this lawsuit is warranted and sends a strong message that we should uphold the First Amendment. No one is above the Constitution, not even the president of the United States. His comments toward journalists and news outlets is egregious and sets a dangerous precedent on how political leaders should react to the press.”

UWO student and Co-President of the Society of Professional Journalists Morgan Van Lanen said this is a difficult time to be a journalist, but you have to be prepared.
“Journalists choose to be journalists,” Van Lanen said. “No one forces you to become a reporter, you choose to be one. And, as unfair as it is, getting scrutiny from the president for how you report on him is just part of the job in today’s world. I’m not saying it’s right or that it’s wrong, I’m just saying it comes with the job right now, and reporters have to be prepared for it.”