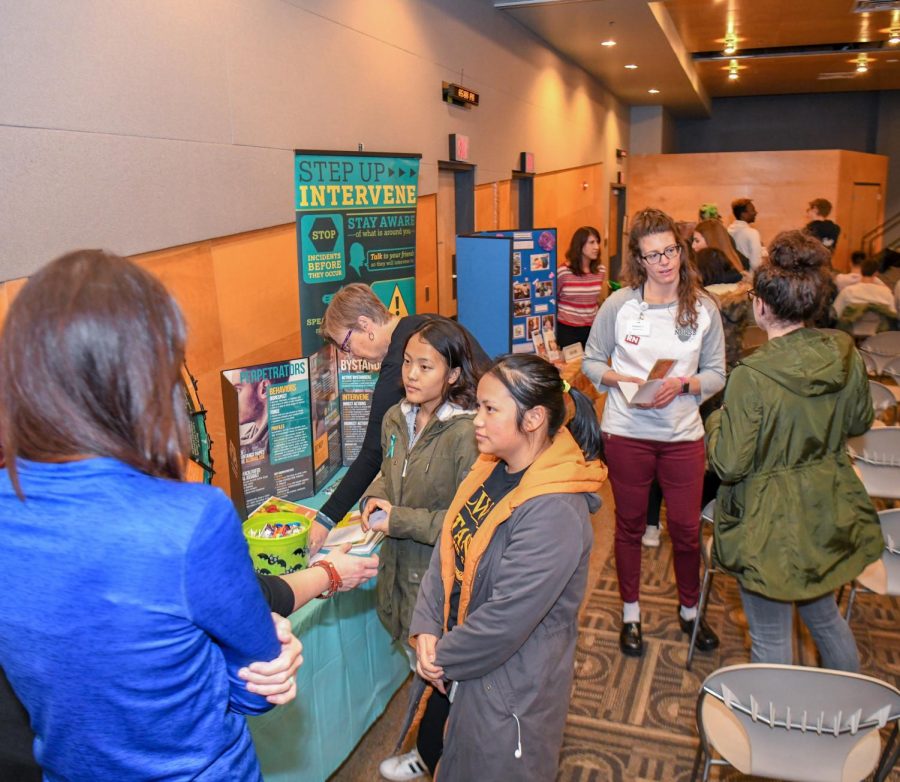 Students collect information on bystander intervention and learn about ending domestic and sexual violence Wednesday at Take Back the Night in Reeve Union.

The director of the UW Oshkosh Women’s Center and the associate vice chancellor and dean of students are partnering to apply for a $300,000 grant that would educate students on sexual assault.

The grant, offered by the Office of Violence Against Women, is a national grant that had 57 awardees in 2018. While the deadlines are not yet posted, the grant submission should be due sometime around March 2019, and UWO would be informed sometime around October 2019.

The Office of Sponsored Programs at UWO is assisting in the process of applying for the grant and other things, such as how the funds can be used.

Women’s Center Director Alicia Johnson said the majority of the funds would be used to hire a full-time sexual violence prevention professional
.
“You know, it seems like a large grant,” Johnson said. “So the grant is up to $300,000 for three years. So you get about $100,000 a year, but in that is a full-time person’s salary plus all the programming expenses, so money goes really quickly.”

Johnson said the work the new hire would do is now dispersed across many people.

“[It] is good in some capacities because then there are more people that are involved in the prevention, which is necessary, but I think to really grow the potential of building a strong prevention program, we need somebody, a dedicated person, to kind of facilitate all of that,” Johnson said.

Johnson said the specialist would be dedicated to coordinating the efforts across the entire campus and working with different departments.
“I think it’s also important to keep that spirit of collaboration across campus alive,” she said.

Johnson said the first objective would be having trauma-informed care trainings because students need a supportive space.

“So what I’m passionate about is the classroom learning environment as well as the student overall experience, of course,” Johnson said. “One of the things that I would work on is helping make classrooms trauma-informed settings so that faculty and instructors understand the impact of trauma.”

Associate Vice Chancellor and Dean of Students Art Munin is a co-principal investigator on the project alongside Johnson.

“We would seek to train a small group of faculty and staff on trauma-informed care so that those professionals could train student, staff and faculty units and departments on all three campuses,” Munin said.

Johnson said the grant is specific in what percentages can go toward initiatives. For example, up to 20 percent of the grant can go toward direct support for survivors.
“So what we would like to do with that 20 percent is grow the trauma retreats that the Counseling Center does and maybe expand them to be more focused or specialized in terms of either type of trauma or population,” she said. “So maybe a trauma retreat specific for LGBTQ+ populations, persons of color, etc.”

Johnson and Munin said existing initiatives on campus could be expanded with the grant money, including bystander intervention training and funding for the Red Zone Initiative.

Munin said awareness and education on sexual assault can always be improved upon.

“Whether it is the Red Zone Initiative, Take Back the Night, Rape Aggression Self-Defense courses or our Bystander Intervention Initiative, there are a plethora of ways members of our community can get directly involved in this work,” Munin said. “This is an issue that affects every member of our community, and a community response is what is needed to eradicate this from our campuses.”

Graduate student Brooke Berrens is a co-director of the Women’s Advocacy Council and volunteers to help the Women’s Center. She said she believes programming and prevention efforts are already great, but it would be helpful to have a sustainable and consistent full-time resource.

“To just have one central person or place to do it will be a lot better,” Berrens said.