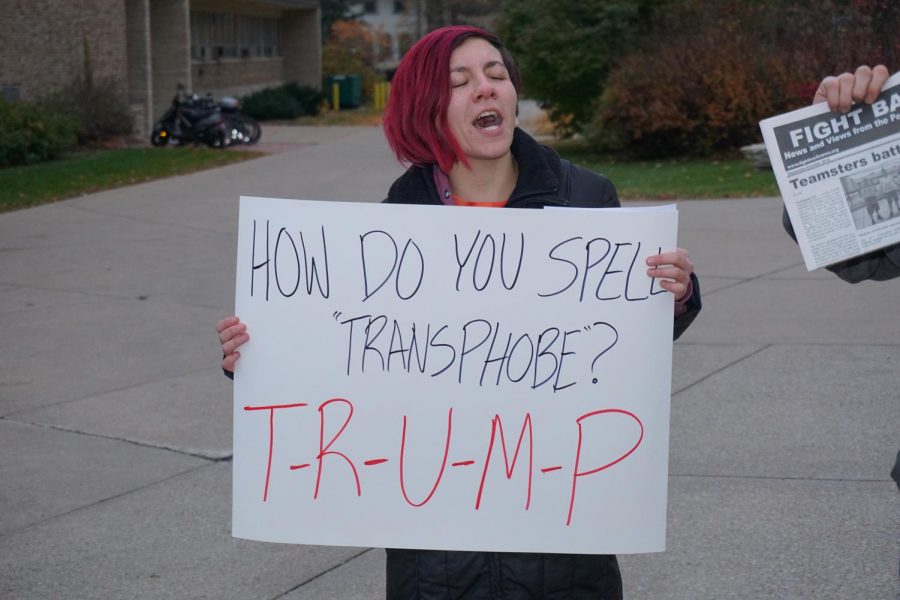 Student displays homemade sign and joins in the protest for transgender rights.

The Winnebago County Board of Supervisors failed to pass a proposal to ban conversion therapy for minors.

UW Oshkosh student and Winnebago County Board Supervisor for District 16 Aaron Wojciechowski submitted the resolution to the board in 2016. On Oct. 16, the board voted 19 in favor, six no and nine absentee votes, which were counted as no. The resolution needed a three-fourths vote in favor in order to pass.

According to Wojciechowski’s proposal, conversion therapy is considered any practice that seeks to change an individual’s gender expression, gender identity or sexual orientation, including efforts to change behaviors or to eliminate or reduce sexual or romantic feelings toward individuals of the same sex.

The proposal stated that conversion therapy does not include counseling or therapy that provides acceptance, support and understanding of the individual or the facilitation of an individual’s coping, social support and identity exploration and development. This includes sexual orientation-neutral interventions to prevent or address unlawful conduct, unsafe sexual practices or counseling for an individual seeking to transition from one gender to another.

The goal of the proposal called for Winnebago County supervisors to advocate against conversion therapy practices with an individual who is under 18 years of age in Winnebago County.

Wojciechowski said his goal was to let people know that the Oshkosh area is an inclusive place for people of diverse backgrounds to visit and live.

“I thought bringing attention to it at a local level would encourage more counties or city councils and it would send a message to the state legislature to say this is an important topic, and we want it banned,” Wojciechowski said.

Board member Bill Wingren said he voted absentee because there was not enough research presented in the proposal.

Wojciechowski said he has seen the negative effects conversion therapy can have.

“When I was in high school, one of my friends, I found out his parents sent him to conversion therapy when he came out to them,” Wojciechowski said. “He described it as three months of him trying to pretend that he wasn’t gay. You can definitely tell the emotional drain and the psychological damage that it’s done to him.”

According to the Movement Advancement Project, 14 states have banned conversion therapy for minors.

Reintegrative therapist David Pickup said he has been practicing what was once known as reparative therapy for over 10 years in California.

Pickup said he uses a combination of psychodynamic therapy, eye movement desensitization and reprocessing therapy and cognitive behavioral therapy on his clients “who are not gay identified, through their own belief systems, but they know that homosexual feelings for them have risen in childhood for three main reasons: a very severe case of gender identity inferiority or actual dysphoria; severely unmet needs for affirmative approval and affection; and many times, between 50-70 percent of the time, sexual abuse by older same-sex people or pedophiles.”

According to Pickup, the bans are doing more harm than good.

“Why this is actually abusive is for several basic constitutional reasons,” Pickup said. “It actually bans professional therapy for unwanted homosexual feelings caused by sexual abuse further leading a child into more depression and more anxiety. It robs the client to choose for himself who he truly is. It robs parental rights for minors to have no input whatsoever to the developing sexual and gender issues that a child has. This ban only serves one purpose, to further LGBTQ philosophy. It doesn’t care a lit about other children’s lives that are very different than folks who believe they were born gay or transgender. It disrespects a child’s right to get the therapy that leads to their most authentic self because the therapy really does work.”

Pickup said he has a high success rate, but the outcome is entirely up to the client.

“I have gay clients walk through the door and disagree with my view on sexuality, but we still have a very trusted, compassionate relationship,” Pickup said. “They can be gay; that’s their choice to believe what they believe. I think that trauma is at the bottom of homosexual feelings, but I don’t push that or force that on that, I don’t tell them who they are.”

According to Psychology Today, youth who identify as sexual minorities are two to seven times more likely to die by suicide when compared to heterosexual youth.

UWO religious studies professor Kathleen Corley testified before the Winnebago Executive Board in favor of the ban.

“As a professor, I have had very young students who are struggling with their sexual orientation attempt suicide,” she said, adding that most were freshmen and 18 or 19 years old. “I remain concerned for those under this age who are struggling also, who would be psychologically damaged by conversion therapy and driven over the edge to suicide as well.”

According to Wojciechowski’s proposal, the Human Rights Campaign rated Oshkosh a 13 out of 100 in its 2016 Municipal Equality index, which examines how inclusive state, county and city laws, policies and services are of the LGBTQ+ individuals who reside and work in Winnebago County.

UWO LGBTQ Resource Director Liz Cannon said when a person is forced to do something against their will, it is not helping that person.

“I have heard personal accounts of the harm that this type of therapy can do to a person,” Cannon said. “We have to ask ourselves if someone seeks to change their sexuality what societal forces are causing them to experience such self-hatred, and if a person is being forced or coerced into such therapy, how can that not do further harm?”

Pickup also said the work he does with his clients is not harmful.

“The therapies that they say we do just don’t exist; no professional therapist does the kind of horrific things that this ban suggests,” Pickup said.

Corley said she will not stop advocating for the rights of transgender minors.

“More education of the public needs to be done in order for there to be a groundswell against the use of conversion therapy for minors,” Corley said. “I am committed to participating in this process moving forward and continuing to add my voice to those seeking to ban this harmful form of ‘therapy.’”