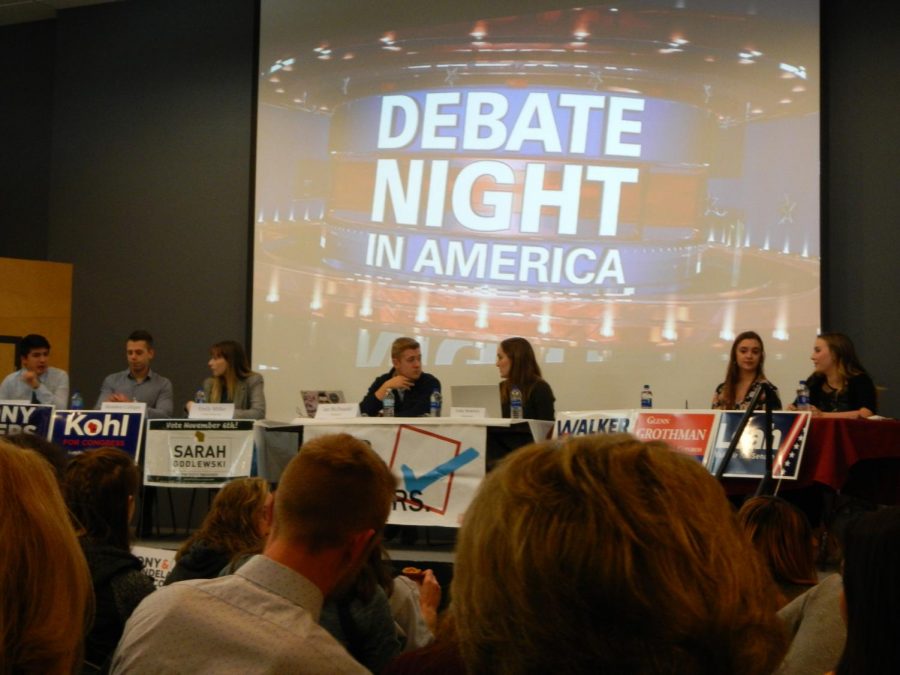 Political issues are discussed before the night of the midterm election.

Over 100 students came to Reeve Union Ballroom to watch the College Democrats and Republicans of UW Oshkosh debate issues such as gun control, education and immigration the night before the midterm election.

The event was organized and moderated by the American Democracy Project, an organization that tries to help college students become informed and active members of the democratic process.

Debate moderator and American Democracy Project intern Ian McDonald said the debate was important because it educated students on candidates the night before the midterm election.

Perrault said the event was important because most students get their news from social media sites, and the debate helped dispel many theories that appear on social media.

“College Democrats said they don’t want open borders, but that’s what I was hearing on social media, so I kind of thought the democrats wanted all the illegal immigrants to come here,” Perrault said. “I think this gives the real picture and not the Facebook picture.”

Wojciechowski said he wanted to dispel the rumor that democrats are looking to take away all guns. He went on to say that mass shootings can be prevented by stricter background checks and more regulation.

“Ninety percent of people agree that we need universal background checks,” Wojciechowski said. “These are simple solutions we can do, same with closing loopholes like buying guns at gun shows, where no one records that.”

The College Democrats and Republicans agreed that Wisconsin needs to strengthen its public school system, but they differed when it came to private school vouchers.

Wojciechowski said public education should be a priority because local communities have been passing referendums to fund local school districts due to a lack of funds from the government.

“[Tony Evers] is going to put money back into the fund that has been taken out to go to tax cuts that don’t benefit us,” Wojciechowski said. “He wants to appoint regents who will push policy that helps students.”

Perrault said funding private school vouchers should be a priority because parents should have a choice in their child’s education.

“I think the voucher system gives low-income people a chance to get a good education,” Perrault said. “It doesn’t restrict you to the one high school in your neighborhood.”

Wojciechowski said even though both parties have disagreed on many issues, he believes that democrats and republicans will unite to pass meaningful legislature within our lifetime.

“I think millennials, the younger generation, as we get older will agree on more social issues like cannabis reform, immigration and the #metoo movement,” Wojciechowski said. “I think a lot of it has to do with civility and working together.”