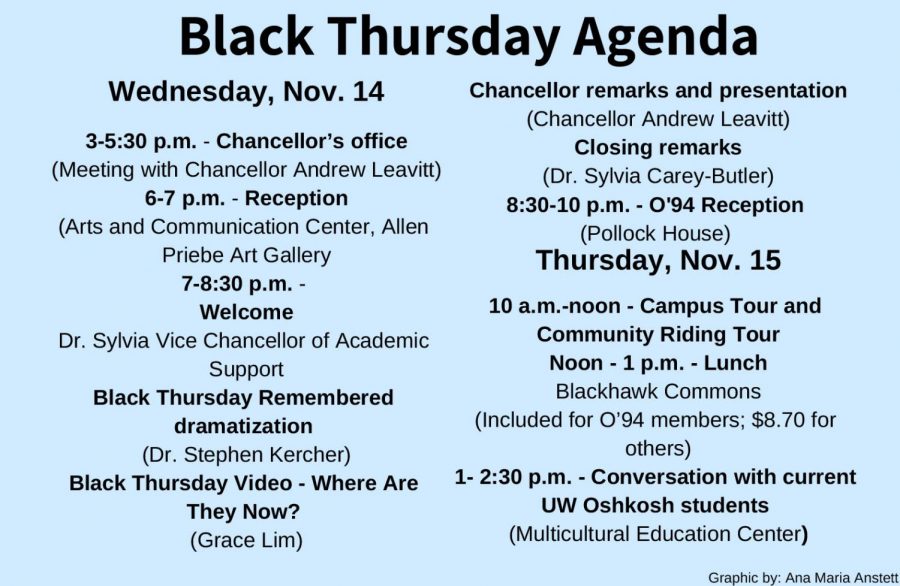 UW Oshkosh will host the “Black Thursday Remembered” event on Nov. 14 and 15 to honor the 50th anniversary of a historic event that took place on campus in 1968.

On Nov. 21, 94 African American students attending UWO marched into the university president’s executive office of Roger Guiles with a list of demands to better the treatment of African Americans on campus.
These students took matters into their own hands after months of feeling ignored and disrespected by campus administrators when the president told them he couldn’t help them. In response, 12 of the 94 students reacted by engaging in vandalism.

The day became known as “Black Thursday” when all 94 students were arrested and expelled from the University System.

According to the Associate Vice Chancellor for Academic Support of Inclusive Excellence Sylvia Carey-Butler, Black Thursday will not and should not ever be forgotten. She also said she is proud of the students helping to prepare for the upcoming event.

“During rehearsal was really the first time that I literally got chills,” Carey-Butler said. “Students said that it finally came alive to them and they thought about what they were reading, and they realized there were students that were their age that this was happening to; going into town and being refused service, and how that made them feel.”

On Nov. 14, students will have the opportunity to meet and talk with 34 of the “Oshkosh 94” members.

Presentations will be given by Chancellor Andrew Leavitt, Sylvia Carey-Butler, Chair of the Department of History Stephen Kercher and journalism adjunct professor Grace Lim.
Leavitt will also be presenting the surviving 34 members with medallions on Wednesday night.