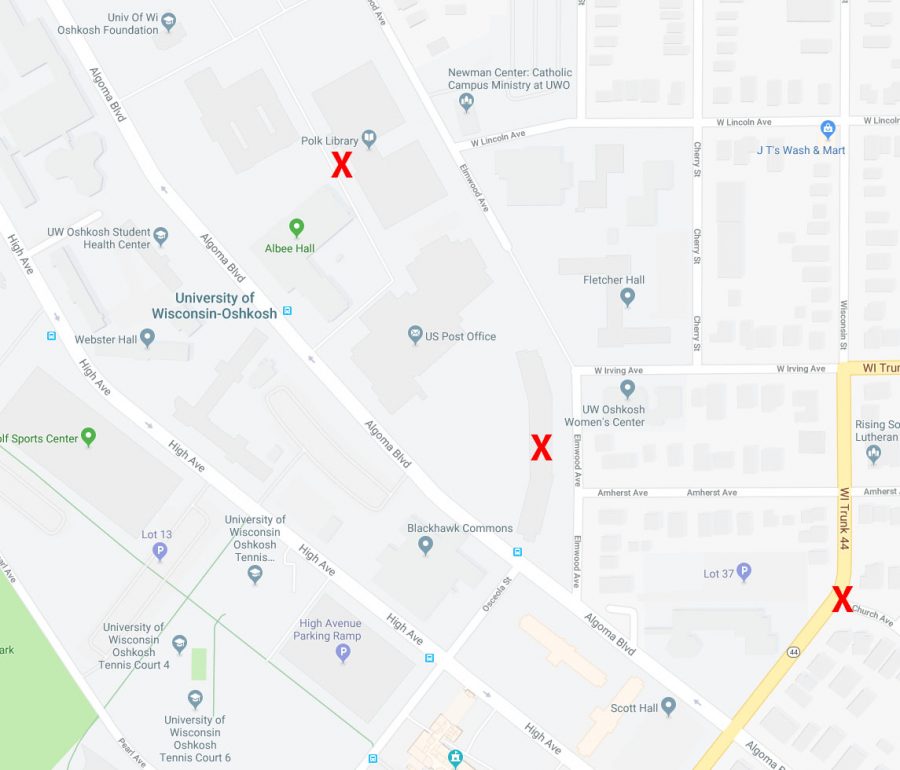 Pictured are the areas where crimes were reported during winter break.

From early December to Jan. 25, three criminal incidents occurred on or close to campus including five males involved in a battery, a male who exposed his genitals at Polk Library and a U.S. Postal Service employee who stole cash and gift cards from student mail.
According to Crime Prevention and Public Information Officer Katherine Mann, on Jan. 25 at 11:55 p.m., five males battered a man on the corner of Church Ave. and Wisconsin St.

According to the Titan Alert, one of the suspects mentioned having a gun, but it was not displayed.

Mann said one of the males who the officers had spoken with had a minor visible injury.

“When officers interviewed the individuals involved in this disturbance, they all stated that they didn’t want to press any charges,” Mann said.

According to a UW Oshkosh Titan Alert, on Dec. 12 at 2:30 a.m., a male exposed his genitals to a female student on the third floor of Polk Library. Two similar incidents occurred on Nov. 18 and on Oct. 1 outside of Polk Library.

All three incidents describe the suspect as a black, 5’10’’ male in his mid-20s. On Dec. 12, the suspect was described as wearing all black clothes with clean, new hiking boots. In the Nov. 18 incident, the suspect was wearing a gray hooded sweatshirt under a blue fleece, light blue jeans, black tennis shoes and carrying a black backpack.

“We have two very strong suspects at this time; however, we don’t have enough to prove beyond a reasonable doubt that it’s those individuals,” Bartlein said. “We’re still working on that.”

Bartlein recommends any student that experiences a similar incident immediately calls the UP.

“With these incidents, they can be somewhat difficult because what we rely on, for the most part, is the victim to be able to identify who the suspect is,” Bartlein said. “But they’re actually very traumatic experiences, and oftentimes the victims have a hard time with the facial features.”

Another incident occurred in early December. According to Bartlein, for about a week and a half, a female employee that worked in the Oshkosh postal service annex stole cash and gift cards from mail that was being sent to residence halls, mostly mail sent to Horizon Village.

“They would look for gift card envelopes, and obviously you can tell if there are cards in there, and sometimes I guess they gambled on cash,” Bartlein said.

Bartlein said the UP first needed to determine if it was someone from Horizon that was stealing.

“So each day we monitored the mail coming in and we were able to determine that the gift cards were removed prior to delivery,” Bartlein said.

Bartlein said they then notified the postal inspector, who created a bait card addressed to Horizon Village.

The suspect has since been caught by the UP and the postal inspector. The U.S. Postal Inspection Service was contacted. The Advance-Titan was informed no further concrete details of the suspect could be provided at this time. The case is being handled at the U.S. Attorney’s Office.

Bartlein said he is unsure if there will be restitution for the victims.

“Most of the cards have been used so I don’t know,” Bartlein said. “I asked the postal inspector about restitution. Now this may be something that goes federal, I’m not sure, and he wasn’t sure about how that would work.”

UWO senior Bailey Gallagher said she thinks it wasn’t right for the employee to take from other people.