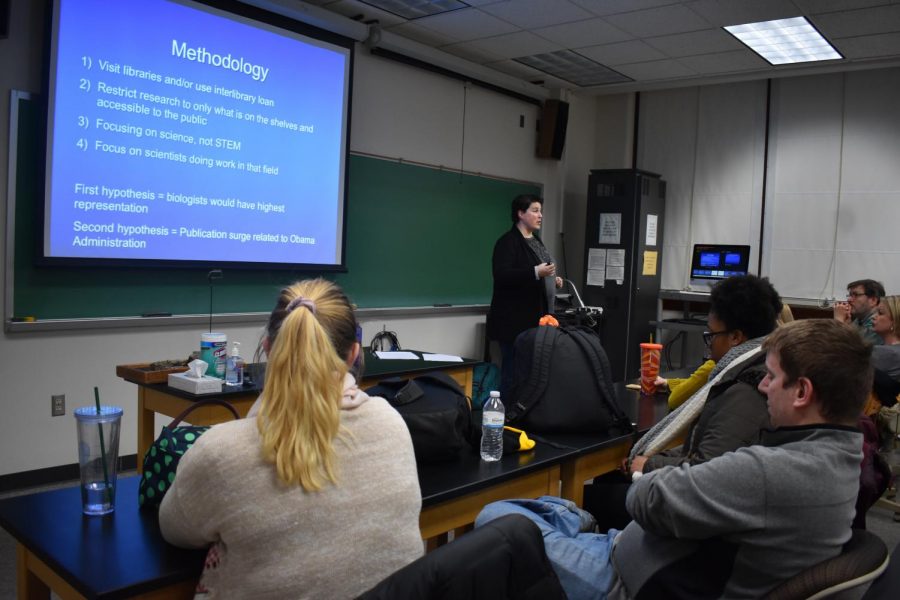 UW-Fox Valley professor Dr. Beth A. Johnson spoke last Thursday about the misrepresentation and invisibility of women geoscientists. Johnson’s goal is to encourage more women to participate in the sciences.

The UW Oshkosh Geology Club invited UW-Fox Valley professor Dr. Beth A. Johnson last Thursday to talk about the invisibility and misrepresentation of women geoscientists in the public.

Johnson’s presentation was “Do You See Her? The Invisibility and Misrepresentation of Women in Geoscientists to the Public.” Johnson said she chose that topic because of the need to encourage more women to participate in the sciences in general, particularly in the geosciences.

“So often we as scientists expect our work to speak for us about why what we do is important,” Johnson said. “But in spite of that, so few people are aware of what geoscientists do and don’t consider it a possible career path.”

“[Johnson] has done a variety of work to look at what influences our perception,” Paulsen said. “She went through various ways that she’s looked at that problem and the problem of just the exposure, how are women portrayed in popular media and what are people’s impressions.”

Johnson said she became interested in the topic of women and geoscience when she was reading the book “Headstrong: 52 Women Who Changed Science — and the World” by Rachel Swaby.

“I realized there were some women who were incorrectly listed in the book (e.g. chemists listed as biologists, etc.),” Johnson said. “I was able to catch this because I work in science and am familiar with different scientific fields, but your average person on the street may not know the difference.”

Paulsen said he hopes people recognize that there is an inherent bias that we have in society.

“Bias is built at an early age, and a lot of the stuff we’re exposed to, you may not be aware,” Paulsen said. “But the way people were portrayed in the media or the way they’re portrayed in children’s books have an impact on what decisions people make later on.”

Johnson said more people should be made aware of how women in science, particularly women in geoscience, are being misrepresented.

“Books and movies have a great potential to influence the public about what scientists can do and study, so it’s important that those scientists and their jobs are portrayed correctly,” Johnson said. “Knowing how I’d received my introduction to geoscience when I was a kid, I especially wanted to focus on children’s books to see what opportunities they would have to learn about women in science.”

“Last semester we had people from Milwaukee, but we’ve also had people from the East Coast and West Coast come in,” Paulsen said. “OSA funds this activity to the Geology Club, and I think it’s the most active speaker series on campus.”

Johnson said she hopes students took away three things from the presentation.

“First, I hope they heard my message about how we need to make sure that women in the geosciences are not hidden in the background, but are being acknowledged for their work and achievements,” Johnson said. “Second, I hope all the people in the room realized the need to encourage and support students of all genders and backgrounds to participate in geosciences. Third, I hope the students in particular realized that you don’t have to wait for the perfect research project or lots of grant money in order to do science.”

Paulsen said the guest speaker series has a variety of topics surrounding the geology theme.

Johnson said she recommends that students who are interested in learning more about the issues women face in the geosciences visit the webpages for the Association for Women Geoscientists and the Earth Science Women’s Network.

“Both organizations are dedicated to encouraging and supporting women in the geosciences,” Johnson said. “The Earth Science Women’s Network in particular has a wonderful online community where people can reach out to others to get advice about research, issues with the faculty, publications, etc.”

The next talk in the speaker series will be March 7 with Dr. William Jacobson’s “Examination of Magnetic Fabrics in Drumlin Landforms and Glacier Ice at Flaajokull, Iceland” at 4:10 p.m. in Harrington Hall 217.