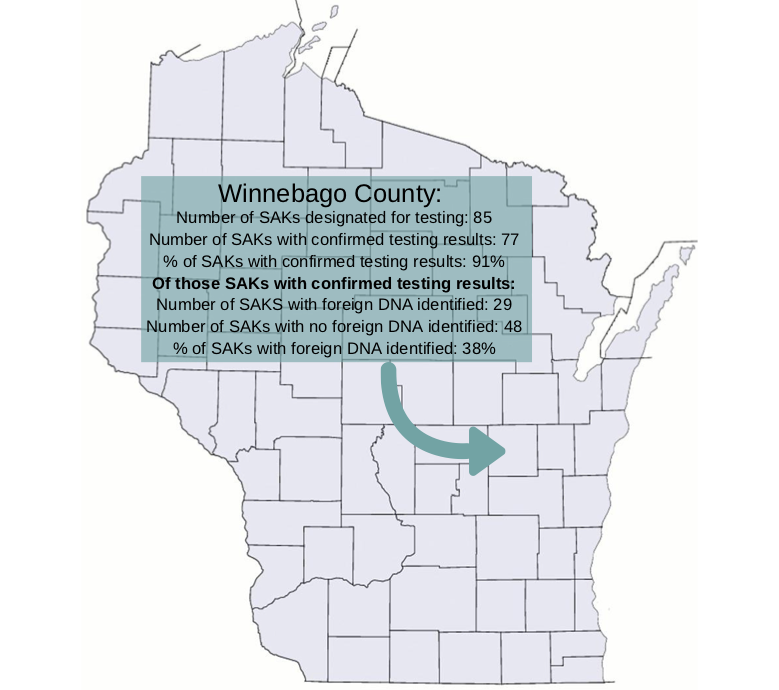 According to an April 12 press release by the Wisconsin Sexual Assault Kit Initiative, Attorney General Josh Kaul announced new data that detailed progress in ending the backlog of untested sexual assault kits in Wisconsin through the funding of a federal grant.

According to the press release, “Of more than 6,000 previously unsubmitted and untested sexual assault kits inventoried in Wisconsin, some kits were originally not designated for testing because the kits were associated with a case involving a conviction. To meet grant requirements, Department Of Justice will now test 320 kits, including a random sample of conviction-related sexual assault kits. This testing will be funded through grant awards.”

Along with these kits being tested, the DOJ has reviewed over 600 cases and continues to review cases with new information. A case review does not necessarily result in a prosecution or conviction; however, charges have been filed in five cases, one of those cases in Winnebago County.

In Winnebago County alone, as of April 12 there were 85 SAKs designated for testing and 77 SAKs with confirmed results. Of those SAKs, 29 identified foreign DNA.

Case reviewing includes examining police reports, identifying potential safety risks to the public and the victims, identifying legal impediments to a renewed investigation or prosecution such as statute of limitations concerns or plea agreements and whether additional samples are needed from the suspects or consensual partners.

Assistant director of health promotion at UW Oshkosh Juliana Kahrs said the immense backlog highlighted a major issue related to resources and how we prioritize them.

“The backlog of untested rape kits is complicated and happens for many reasons, but there are two main issues that lead to this backlog,” Kahrs said. “First, the evidence is not being sent to crime labs, and second, the evidence arrives at the lab but is never tested.”

Kahrs said she believes it’s important to test SAKs for many reasons.

“Results can identify unknown perpetrators, confirm a survivor’s account of an assault, help solve other cases that may not always involve sexual violence, and they can exonerate innocent people,” Kahrs said.

Kahrs said many of the kits are labeled “anonymous,” so they may not be tied with an ongoing criminal investigation.

“This could be in cases when the survivors decided not to move forward with criminal cases,” Kahrs said. “Although they probably should be tested for the reasons mentioned above, the crime labs don’t have the resources to keep up with the demand.”

Assistant clinical professor in the College of Nursing Laura Smolinski said she attended a Sexual Assault Nurse Examiner conference Tuesday where they gave an update on the backlog of sexual assault kits. Smolinski takes calls as a SANE nurse at ThedaCare for about 36 hours a month.

“All of the kits that police departments have asked to be tested have been tested,” Smolinski said. “There are many reasons that kits are not tested. The majority of untested crime labs are from survivors who report anonymously. They have nine-and-a-half years to decide to report. If they choose to report, it will be tested at that time. There is a 10-year statute of limitations. I understand that there are reasons to just test everything because of the possibility of cold-hits and improving our database; however, survivors report a loss of control — whether to report or not is something that we want survivors to have control over.”

Junior Brianna Costello said sexual assault shouldn’t be blamed on the victim for their appearance or what they choose to wear.

“I think [sexual assault is] a disgusting thing that needs to stop and people need to be punished for their actions for it,” Costello said. “It’s really sad that a lot of men and women don’t get punished for it, they just get parole or house arrest, or they even have five years in jail, but they only serve a few months.”

“But it depends on how long it’s been because people don’t want to relive that day,” Costello said. “I think it’s something that should be done right after if they are comfortable with coming out and getting help with it.”