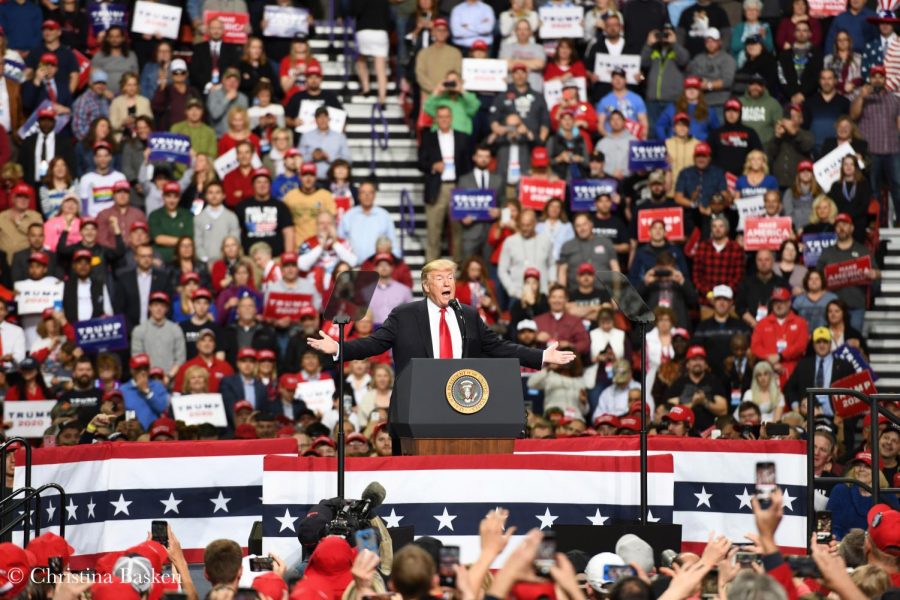 President Donald Trump talks about the accomplishments of his administration and his plans for re-election.

GREEN BAY — Thousands of Wisconsinites gathered together, those for and those against, to see President Donald Trump at his MAGA Rally at the Resch Center last Saturday.

Earlier in the day, Democrats held a press conference and rally at the Green Bay Labor Temple to discuss health care, taxation and the environment.

“All his lying and the way he treats the media, you know, anything that doesn’t paint him in a positive light is automatically fake news,” Lazansky said.

Wisconsin State AFL CIO secretary treasurer Dennis Delie said the rich and the powerful wipe out unions in their quest to become richer and more powerful.

“Never has this quest for extreme wealth and power been as evident as it is under this current administration,” he said.

Sen. Dave Hansen, D-Green Bay, said problems with health care are obvious at the federal level, where polls show that Democrats have a 10-point lead over Trump on overall individual health care.

“President Trump brags … over and over again that he will destroy ObamaCare,” Hansen said. “Voters in Wisconsin have turned against him on health care. He bragged to the NRA about the sabotage that he’s done to the Affordable Care Act by getting rid of the individual mandate and followed it up, ‘Now we’re going to get rid of the rest.’ Wow, what a statement.”

“People shouldn’t be afraid of going to the hospital or the emergency room because of how much it will cost, and I see that all the time in urgent care,” she said. “They come in days after they’ve been sick and now instead of getting them antibiotics, now we’re starting IVs and they have to come in because their leg got so infected, things like that. It’s just wrong.”

Wisconsin Lt. Gov. Mandela Barnes said Trump is only holding a rally in Wisconsin because he is fearful.

“Donald Trump has been a disaster in each of these issue areas (treatment of immigrants, clean energy, criminal justice reform, health care) for our state, for our country,” Barnes said. “Look at our dairy farmers; we lost 700 dairy farmers last year. You look at the price of milk, and our president isn’t doing anything to support our family farmers or working people. He’s not doing anything to support our working people who are working so hard to get the health care that they deserve. Yet he’s here today because he’s desperate. He knows the importance of the state of Wisconsin. He knows that when Democrats lead with a vision, Donald Trump has no chance.”

Meanwhile, outside the Resch Center, Trump supporters waited for hours to get in for the rally.

Eva Wypych, formerly of Poland, said she came from Chicago and had been standing in the VIP section line for eight hours.

“I’m so happy to be here,” she said. “I am always supporting President Trump. The way he treats our country, I think he’s one of the best presidents ever. I came from a communist country. I don’t want communism here; I got out of the country in 1979 and I don’t want the same thing here. America first, security first, job first. I love this president; I love this crowd. I love this rally. For the first time, I am very happy.”

Michael Schnur said he came solely to support his president.

“I just don’t find myself fitting in with a lot of the politicians on the Democratic Party, and I feel President Trump speaks for me, with the whole common sense thing, like you have the freedom to own a gun, the common stuff like who is in our country, why they are here,” Schnur said. “I’m a big Second Amendment guy. I love my gun rights. It’s one of the first rights in the Bill of Rights that we have. I love the idea of the barrier of the wall; it is a problem down at the southern border.”

Eden Witt said she came to the rally to celebrate with like-minded individuals.

“… We’re really broken as a country,” Witt said. “When you come here, you can celebrate things like the flag and how great our country is, and you know that everyone here believes the same thing. It’s very unifying and that’s just something that our country doesn’t have anymore. I wish we could share this with other people who don’t like Trump. I agree with his foreign policy because he’s tough, but he also doesn’t want our soldiers fighting useless wars because that’s not fair to them, and that’s not fair to their families. I also agree with lower taxes and cutting regulations to help businesses. Most of all, I appreciate Donald Trump because, unlike most Republicans, he has a backbone.”

The doors opened at 4 p.m. and security began checking in every individual. President Trump didn’t take the stage until 7 p.m. but that didn’t stop the crowd from cheering in excitement hours before his appearance.

Social media personalities Diamond and Silk, U.S. Congressmen Mike Gallagher and Sean Duffy, both R-Wis., and Donald Trump Jr. hyped up the crowd before Trump finally walked down the runway.

“I understand in 2016 you guys took a big chance on my father, what was different than him than any other politician, making promises,” Trump Jr. said. “You’ve been hearing promises for decades, but now look at the numbers across the board. Five million new jobs in America, many of those right here in Wisconsin.”

When the audience caught glimpse of Donald Trump’s shoe appearing through the curtains, the crowd immediately burst into a roar. Trump took his time walking down the runway, bowing and pointing at the audience.

During his speech, he addressed several issues concerning healthcare, jobs and the Mexican border.

“We’re going to be the party of healthcare,” Trump said. “We’re coming up with a great package after the election. We repealed ObamaCare. It’s unfair and a very unpopular individual mandate. Well, you had to pay a fortune for the privilege of not having health insurance; that was very bad. And we’ll always protect patients with pre-existing conditions. The Republicans are always going to protect pre-existing conditions.”

A full repeal of the Affordable Care Act would get rid of provisions that protect people with pre-existing conditions. Trump did not talk about his plan to counter this.
Trump also talked about expanding the United States military.

“We are rebuilding our military like never before in the history of our planet,” Trump said. “That includes brand new combat ships from Marinette and more than 6,000 brand new armored vehicles from Oshkosh.”

“In the state of Wisconsin alone, we have created 23,000 brand new manufacturing and construction jobs, a record,” Trump said. “After years and years of declining wages, wages are rising for the first time in 21 years. We have cut 30,000 pages of job-killing regulations from the federal register. That’s an all-time record. It’s never happened before. We passed the largest package of tax cuts and reforms in our nation’s history.”

During the president’s speech, there were many chants coming from the audience, one of the most popular being, “Build the wall!”

“We’re building the wall by the way,” Trump said. “We’re gonna have over 400 miles of wall built by the end of next year. These left-wing extremists don’t believe America has the right to enforce our immigration laws or decide who gets to enter and remain in our country. Democrats want to allow totally unlimited, uncontrolled and unchecked migration all paid for by you, the American taxpayer. The Republican Party believes America has not only the right, but the absolute duty to control our borders and to enforce our laws.”

Trump said the wall is necessary to recruit workers legally and to control drug trafficking.

“We have so many companies … that need workers, but they have to come in legally and they have to come in through merit; we will always support the heroes of ICE and border patrol,” Trump said. “The border crisis is also driving, and very strongly, the drug crisis, the biggest crisis we have. It’s people, and it’s drugs, and it’s traffickers, cartels, traffic, huge quantities of heroin, meth, cocaine and fentanyl across our southern border.”

“Last month alone, 100,000 illegal immigrants arrived at our borders, placing a massive strain on communities, and schools, and hospitals and public resources like nobody’s ever seen before,” Trump said. “Now we’re sending many of them to sanctuary cities, thank you very much. They’re not too happy about it. I’m proud to tell you that was actually my sick idea, by the way.”

Fact Check: WBAY reported that there is no evidence to support that the Trump Administration has begun to send migrants to sanctuary cities. In fact, Homeland Security Officials rejected the plan as unworkable.

“[Democrats] are aggressively pushing extreme late-term abortion, allowing children to be ripped from their mothers’ womb right up until the moment of birth,” Trump said. “The baby is born. The mother meets with the doctor. They take care of the baby, they wrap the baby beautifully. And then the doctor and the mother determine whether or not they will execute the baby. I called on Congress to immediately pass legislation prohibiting the extreme late-term abortion abolished. So Democrats are now the party of high taxes, high crime, open borders, late-term abortion, hoaxes and delusions.”

Many of the speakers before Trump took the opportunity to bash the news. Trump also weighed in, referring to “sick, demented, horrible beings” that go “blow up a store” after reading something on the internet.

Fact Check: At UWO, journalism students are taught by their professors to tell the truth, report their stories in a fair and balanced manner and to give proper sourcing to everything.

UWO journalism professor Vincent Filak said free speech is vital to a democracy, whether or not our president happens to like it.

“We all have to be allowed to say our speech; otherwise it’s not free speech,” he said.

Trump said that he signed an executive order a month ago to defend free speech on college campuses.

“And if they don’t give free speech, they lose billions and billions of dollars, and that’s OK,” he said.

Despite the negative comments against the media, Trump closed on a positive note.