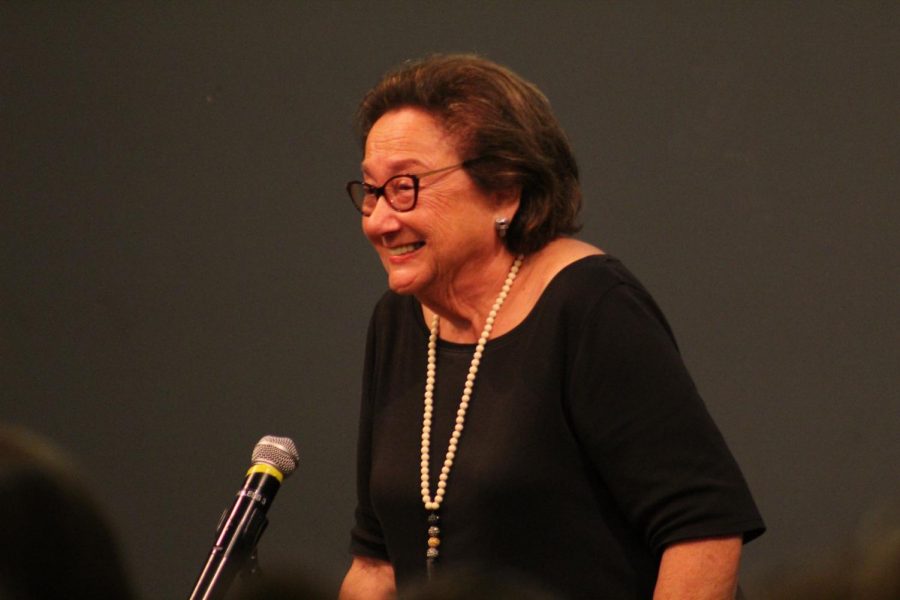 Eva Zaret, a survivor of the Holocaust, speaks with students in Reeve Memorial Union.

Eva Zaret, an 83-year-old Holocost survivor from Budapest, Hungary, spoke on the importance of kindness and love last Wednesday at UW Oshkosh as a guest speaker.

Zaret began her story by sharing that she was only 6 years old the first time she realized her religion made her different. Zaret recalled being asked to leave the room when her classroom participated in prayer, and said her classmates were praying to the Lord, and told her “the Jewish people killed Him.” Zaret went home crying that day, asking her parents, “Did you kill anyone?”

Zaret’s father worked in a hard labor camp for the Nazis for two years. Speaking on his death, she said her father was one of 2,000 men who, at the border of Yugoslavia and Budapest, were shot into their graves after being forced to dig them.

Zaret said the horrors she experienced still haunt her dreams.

“This is one of my nightmares,” she said, as she went on to describe watching a Nazi soldier grab a crying baby from a woman’s arms and throw it against a wall.

“Everywhere, death. That’s war,” she said, describing the horrors she witnessed during the Holocaust.

“I saw people throwing themselves off of buildings because they couldn’t stand what was happening,” she said.

Zaret lost many of her family members in the Holocaust. After showing a picture of her two young cousins, she recalled the story of their death.

“It is very hard to speak of them, because they were beautiful,” Zaret said. The children’s parents were in concentration camps, so her two cousins were being cared for by nuns.

After going out to a movie, the two cousins were recognized by one of their friends. This friend told the Nazis that the girls were Jewish, so the girls were shot into the Danube river.

Zaret recalled one near-death situation that occured in the house where she stayed while her mother was at work. Nazis had shown up at the house and took the other children who were staying there, saying they were going to the park. Thankfully, Zaret hid under a mattress, too frightened of the soldiers.

“Those children ended up in Auschwitz in the ovens,” Zaret said.

Rape, murder and rooms half-full of dead people were among the other horrors Zaret saw before escaping to the Carpathian Mountains with her aunt.

But for Zaret, escape did not mean safety. When Zaret escaped to Ukraine, she said the people there were “as horrible as the Nazis.”

Zaret said during her journey to flee to the U.S., she encountered a “wonderful German lady” who gave food to her and her baby and cut up the sheets from her own bed to make diapers.
“We have to rely on the kindness of strangers,” she said.

Zaret’s was finally able to escape to Milwaukee, where she fell in love with the beautiful scenery and wonderful people.

“Young people in this country don’t realize how good they have it,” she said.

Zaret has made sure to tell her family, including her young grandchildren, the truth about her past. She has even made the journey back to Budapest with her family to visit the apartment where she used to live with her father and mother.

At Zaret’s presentation, UWO graduate student Zoe Meyers fought through tears to ask Zaret if she has been in touch with her Jewish faith since her escape. After answering “yes,” Zaret welcomed Meyers to come to the front of the room and gave her a hug.

One of the many UWO students who met Zaret after her speech was history student James Parnau. Parnau shared that he was inspired to attend because his grandfather, Eddie Franken, fought as an American soldier in World War II and helped to liberate the Dachau concentration camp.

Zaret said seeing the large crowd gathered to hear her speak at UWO gives her hope for the future.

“I’m scared that [the world’s] not going to exist if we don’t love each other, if we bully each other,” she said. “Hate brings hate and destroys society.”