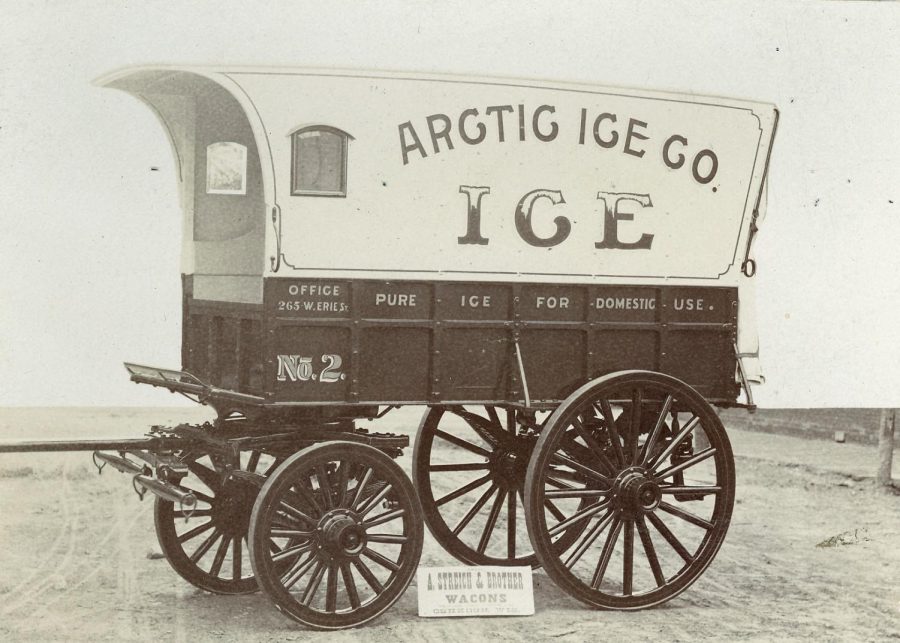 In his 86 years on this planet, Glenn Wilcox has witnessed the earth’s changing climate. He’s seen the winters getting warmer, he’s seen the seasons change and he’s experienced extreme weather events firsthand.

Wilcox has lived in Winnebago County for 68 years, and he said Wisconsin winters were quite different when he was a child.

“They were colder,” he said. “We used to walk along the top of the snow banks and touch the telephone wires. The snow was deep, but our legs were shorter too.”

Wilcox, who spent his childhood in Waupaca County, remembers a time before refrigeration was common when his family used blocks of ice in iceboxes to cool their food.

This ice was sawed from Wisconsin lakes during the winter months, pulled out with hooks and dragged across the frozen lake on sleds by hand or by teams of horses.

“On [the] Weyauwega mill pond is where they were cutting it when I was a kid,” he said. “They’d cut it with a handsaw — they didn’t have electric ones. They’d cut through the ice and then they’d poke the block.”

The ice would be pulled out with tongs and cut to different sizes to fit refrigerators and stacked in ice houses with sawdust packed between for insulation to keep the ice frozen throughout the summer months.

“That’s the only refrigeration we had,” Wilcox said.

But nowadays, if residents relied on Lake Winnebago for refrigeration they’d be on thin ice, according to Don Herman who owns SUNK? Dive & Ice Service in Oshkosh. Herman has been recovering sunk items from Lake Winnebago for 40 years.

In an average winter, Herman and his crew will recover anywhere from 20 to 47 items that have fallen through the ice, anything from vehicles to ATVs, snowmobiles, semis, even an airplane.

But Herman recalled a winter just eight years ago when his crew recovered no sunk items.

“In 2011, we never put our trucks out on the lake because there was no ice,” he said. “There’s been a few more years where it just seems like it gets warmer earlier.”

Herman, who arguably knows ice conditions better than most anyone in the county, is right, according to Steve Vavrus, a senior scientist at the Nelson Institute for Climatic Research in Madison.

“Wisconsin’s been warming more in the winter than in other seasons and so that would have a bigger impact on ice cover,” he said.

Vavrus added that with climate change, the ice cover is affected in several ways.

But it isn’t only our lakes that will be affected by the warming of our planet, according to UW Oshkosh Director of Environmental Studies Jim Feldman, who said we can expect to see many more severe weather effects.

“More flooding, heavy intense rainfall, drought, the winters will have more of a wintry mix [of rain and snow], more water in the air, more big weather events,” he said.

These extreme weather events aren’t only something we should expect in the future; they’re already occurring.

In 2008, flooding was so severe in Wisconsin that the state received more than $44 million in grants from the Federal Emergency Management Agency. In Fond du Lac, 2,000 homes sustained substantial damage and the town was declared a federal disaster area.

Vavrus said Wisconsin has experienced severe flooding in the last few years due to heavy rainfall.

“Our precipitation has been so high in recent years and it means that the water tables are high and the soil is pretty wet to begin with,” he said. “So when we get one of these heavy rainfalls, there’s not as much storage for it to run off so it creates bigger flood problems.”
The evidence of climate change is overwhelming. The ice is melting, our water tables are rising, our seasons are changing and our planet is melting. In Oshkosh, we’ve seen an average temperature increase of 1.3 degrees Celsius since 1895. An increase of 2 degrees Celsius is considered catastrophic.

When considering the source of our increasingly urgent climate issues, Feldman said the scientific consensus is clear.

“Our climate is changing in ways that are beyond doubt caused by human activity,” he said.

The scientific community has developed a two-part approach to address climate change: mitigation and adaptation.

Vavrus said mitigation is to try to reduce the amount of harm we do to our planet by reducing the amount of carbon emissions put into the atmosphere so there’s less of a warming source.

Adaptation, he said, is to accept that the climate is changing and will continue to change and to find ways to be adaptable to these changes.

Feldman said there are certain things that can be done individually and collectively to help slow climate change.

“You can bike instead of drive. You can lower your carbon footprint, you can eat less meat,” he said. But he added those things aren’t even remotely enough. If we truly want to slow climate change, he said, we need to make a collective impact.

“What really needs to change is much bigger and deals with policies and systems. It’s great if individuals make a change, but what individuals really need to do is band together collectively to demand that policies are put in place to encourage renewable energy, to encourage the shift away from fossil fuel energy,” he said.

Wilcox knows he won’t be around in the next few decades to see the worst impacts of climate change. But for now, he’ll remember the Wisconsin climate a little bit differently than the younger generation.

“We had four seasons back then,” he said. “Now they’re all mixed up. The winters aren’t getting as cold; you don’t know what’s what.”