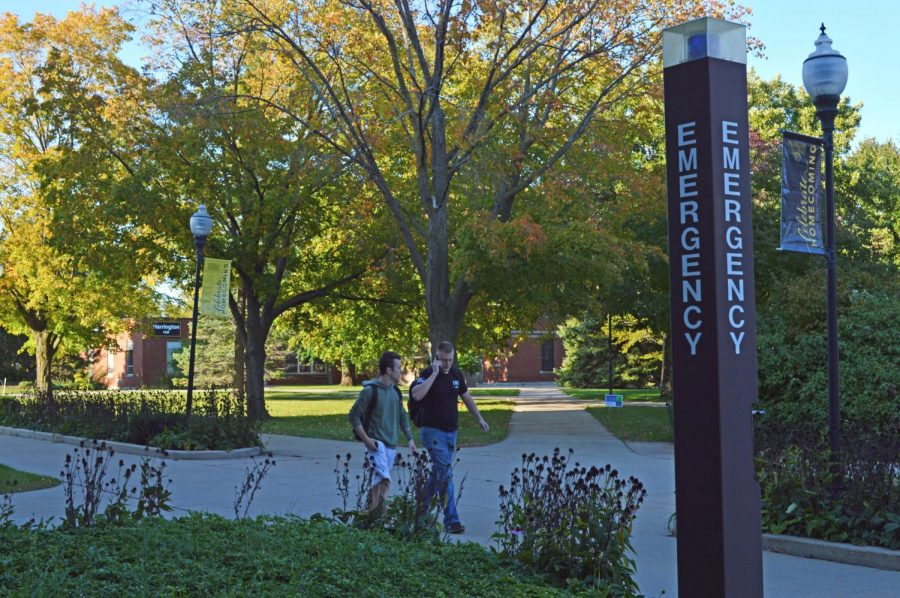 Blue light emergency phones are phasing out around campus. UP is promoting the UWO Mobile app.

UW Oshkosh is making plans to ensure student safety while balancing costs as talks continue about phasing out the “blue light” emergency phones on campus.

“We have to make a decision about how to be fiscally minded,” University Police Capt. Christopher Tarmann said. “The blue lights we have are obsolete. It would cost about $200,000 to replace every blue light on campus.”

Tarmann estimates there are only about one or two legitimate emergency uses of the blue light phones per year.

“There’s definitely way more prank use … than there is actual use,” Tarmann said.

Tarmann said about a year ago the blue lights helped thwart a sexual assault.

“We had a stranger sexual assault,” Tarmann said. “Somebody used the blue light to report the incident.”

Tarmann said the blue lights are still accessible for calling a Saferide.

“You can use them for any way to connect with us,” he said. “It doesn’t have to be an emergency, but it does have to be a legitimate police use.”

UWO Mobile, an app created to put safety resources at students’ fingertips, has a mobile blue light feature that serves the same purpose as a stationary blue light phone.

Tarmann said his favorite feature of the app is “Chat with UP.”

Tarmann said students in an uncomfortable situation could use the chat feature to text back and forth with UP and no one around the student would ever know.

The app has a Virtual Safewalk feature where students can allow the UP to track their location live until they get to their destination. Tarmann said the app can be in your hand anywhere you go, whereas the blue lights are stuck in one spot.

“There were periods of our lives when we didn’t have cell phones,” he said. “That’s very much when those [blue lights] were relevant.”

Although Tarmann said he’s not sure if the UP gets to make the decision on phasing out the blue lights, he added it could be 20 years before every blue light is gone. That’s why Tarmann fought to get an app with blue light features three years ago.

“I knew that’s where we needed to be,” Tarmann said.

Currently, UWO Mobile costs about $4,500 per year to operate.

The UP plans to continue their proactive approach to policing to ensure safety among the community. Tarmann said, “Our No. 1 goal for the police department is to keep students safe.”

“You’re going to see us out there. … We’re not hiding. … We’re not trying to catch you,” Tarmann said. “We care about our community and want them to be safe.”

The UP plans to continue to offer the Saferide program to students during Pub Crawl. A Saferide can be summoned on the UWO Mobile app or by calling the UP at 920-424-1212.

Tarmann expressed concern for students and community members as the annual fall Pub Crawl will be taking place this weekend.

“I get scared for our community when they go to that event,” Tarmann said. He added his biggest safety message to Pub Crawl participants would be “don’t get scared to call us because we’re here to help you. We understand what’s happening.”

If students have any safety concerns they would like to discuss face-to-face with the UP or the chancellor, Tarmann recommended students attend the annual Chancellor and Chief Campus Safety Walk.

On Oct. 14th at 5:30 p.m., Chancellor Andrew Leavitt, UP Chief Kurt Leibold and other campus leadership will meet in the UP parking lot. Students are welcome to attend and bring their safety concerns with them.

Editor’s Note: This story’s headline has been updated.