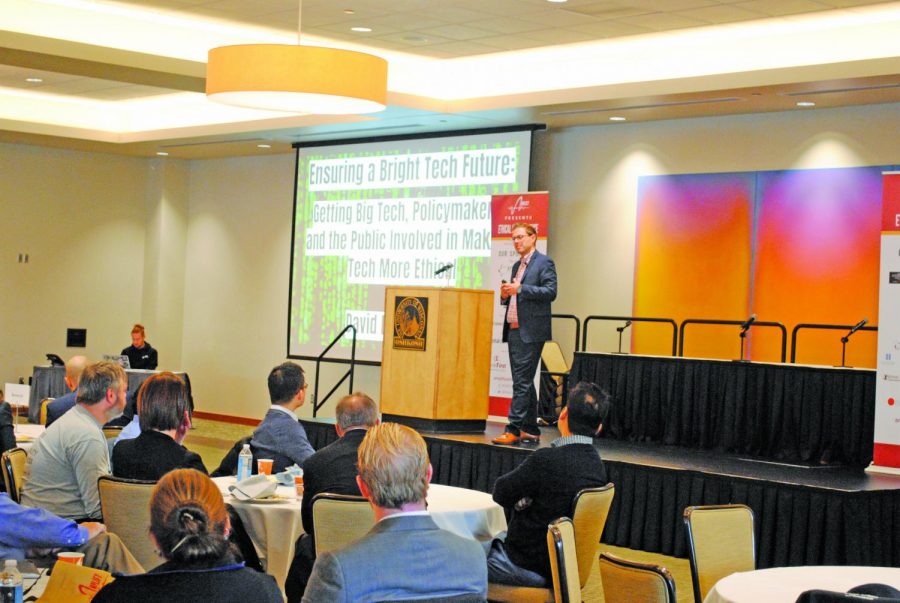 To avoid a dystopian future, tech companies need to close the gap between innovation and consideration because technology advances much faster than the government can regulate, tech ethicist David Ryan Polgar said at the Amplify Oshkosh Ethical IT Conference.

The conference, held in the Culver Family Welcome Center at UW Oshkosh on Nov. 15, aimed to bring awareness to ethical issues facing the tech industry.

Polgar, the conference’s keynote speaker, described his job as coming up with solutions for technologists and engineers.

What Polgar does is try to look at developing and existing technology and try to plan for the problems that can arise from those technologies.

“Think about a lot of the hot issues in the media: political advertising on Facebook, misogyny, hate speech and governments leveraging companies like Twitter,” he said. “The founders, like Jack Dorsey or Mark Zuckerberg, say ‘I didn’t think about how this could be abused.’”

He said tech entrepreneurs only took into account the best-case scenarios of how their products could be used, and they need to begin to consider the worst-case scenarios as they develop new technologies.

“When we think about anything with IT, we’re not always cognizant of different perspectives,” he said. “Oftentimes when we’re creating something, we’re disconnected from the individuals who would actually be impacted by that technology.”

He said taking other perspectives into account is important because everyone has biases, even if they aren’t cognizant of those biases.

Technology needs to be integrated into our political process because everything being developed has large societal impacts, Polgar said. He said there needs to be a kind of symbiosis between the media, government, the general public and industry.

Right now, he said, we’re in a finger-pointing stage, where some say the public needs to take more responsibility in protecting their passwords and personal information, while others point the finger at industry saying it needs to be more socially responsible, or at government for being too slow to regulate the industry.

Polgar said we need to move away from the finger-pointing stage and toward the handshake stage.

“It’s a little shortsighted to assume that is one category’s responsibility,” Polgar said. “What’s really happening is there’s a push and pull. There’s an interplay because the more the general public is thinking about something, the more they put pressure on politicians who then put regulations on industry; it creates an interesting feedback.”

In terms of regulating the tech industry, there’s a fear of slowing down because the United States and China are in a technological cold war, racing to perfect artificial intelligence, Polgar said.

He said it’s wrong to look at regulating the tech industry as slowing it down “because you can’t slow down American innovation and you probably shouldn’t.”

“We want to make technologists more thoughtful on injecting a greater level of ethical thinking and oversight into the industry,” Polgar said.

He said the thought that regulation slows industry down stems from an age-old American debate: to regulate or not to regulate. What is ethically questionable behavior today may be illegal tomorrow, Polgar added.

He used the example of the internet. When it was first developed, it was thought of as a utopian information superhighway, but now it is being used for nefarious purposes, such as collecting personal data from millions of people.

“We didn’t think about how that could be abused,” Polgar said.

To create better technological outcomes, Polgar said companies need to consider how their technology can be misused, which requires them to take input from a variety of people with different backgrounds.

“We’ve seen in the social media sphere what happens if you leave it up to a bunch of Silicon Valley bros,” he said. “Social media is important; it’s how people get the news and it affects democracies across the world. You don’t just want to leave it up to one body because that would be negligent.””