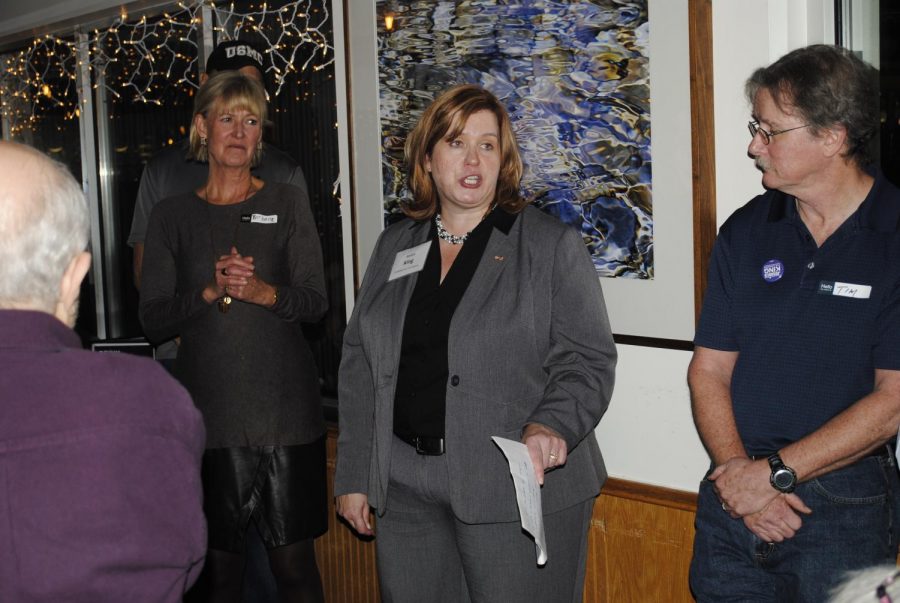 Democrat Jessica King kicked off her bid to challenge Republican incumbent Glenn Grothman in the 6th congressional district with the message that she’s a problem solver who will fight for the working class.

As she addressed a crowd of supporters — including Winnebago County Executive Mark Harris and State Democratic Rep. Gordon Hintz — at Fox River Brewing Co. on Nov. 20, King described being a lawyer and fighting for the working class during the housing crisis, as well as fighting for farmers during the Great Recession.

For the last six years, King said she’s been fighting for hospital patients against health insurance companies to get wrongfully denied claims paid.

But King hasn’t always been a private lawyer. From 2007 to 2011, she served on the Oshkosh Common Council and from August 2011 to January 2013 she was a member of the state senate.

“I really believe that health care policy has to be our No. 1 priority in the legislature right now,” King said. “Suicides and chemical dependencies are at an all-time high.”

In terms of health care policy, King said she wants to build a better public option while maintaining private insurance.

“I believe at the end of the day people have to have choices. I don’t agree with forcing people into a path they may not want to take,” King said. “I think the private options are going to realize that they have to compete with the public option, and I think that’ll really bring prices down in the marketplace.”

Beyond health care, King wants to go to Washington to do her part to combat the student debt crisis. She never thought she would have the opportunity to attend college, but she worked third shift in a factory to pay for college and attended UW Oshkosh.

“Coming to Oshkosh changed my life,” she said.

King recalled a professor who told her that if she worked hard, she could achieve her dreams. Going to UWO propelled King forward; after finishing college, she went to Thomas Jefferson Law School.

“I could pursue a college degree and it was affordable,” King said. “That’s what I want for our young people today.”

King’s work in local government has given her an appreciation of the local officials who make decisions that affect the electorate on a day-to-day basis. If she gets elected, she wants to go to Washington and say, “Think local.”

“Our local units of government don’t get the support that they actually need from the federal government,” King said. “We need to think about local solutions first and empower local people.”

King believes her experience in the state legislature will help her navigate a hyper partisan congress, since when she won her state senate seat in 2011, the legislature was polarized.

When King was in the state legislature, she said, she would often look for one issue that was supported by both Republicans and Democrats and try to foster cooperation around it. She hopes to do the same thing at the national level, if elected.

“There are a lot of issues that we really agree on,” King said. “Somebody has to stand up there and say, ‘we’re more alike than different and what can we agree on?’”

Her decision to challenge Grothman for the 6th district congressional district seat stemmed from becoming a mother three and a half years ago. After King became a mother, she looked at issues like climate change, the student debt crisis, unaffordable health care and stagnating incomes for the middle class, and wondered what kind of a world her son would grow up in.

“My son is the 6th generation of the King family to live in the 6th congressional district,” King said. “I really want this to be a thriving place for him. And I’m concerned that if we don’t send real advocates to Washington to solve real problems, I don’t know what I’m handing him.”

Knight had previously been a “lifelong Republican,” voting for the party in every major election until 2012. He said the party has moved too far to the right and drifted away from his core values.

“I haven’t budged in my beliefs, but they’ve diverged,” Knight said of the Republicans.

County Executive Harris said he’s supporting King because she represented the county well in the state legislature and he believes King will stand up to the 1%.

“Her opponent is really only oriented toward the top 1% that everything he’s done has been to cut taxes on really wealthy people while being very critical of people that need help,” Harris said.

Oshkosh Resident Kelly Laux, who is volunteering for King’s campaign, describes herself as a moderate and said King is pragmatic and focused on “getting things done.”

She added that she wants to ensure that the 6th district thrives, and that people living there can see a path to opportunity.

“I want to represent actual people and solve problems for you,” King said. “I’m sick and tired of seeing these millionaires and billionaires, snake oil salesmen that come in with these ideas, promising snake oil dreams.”