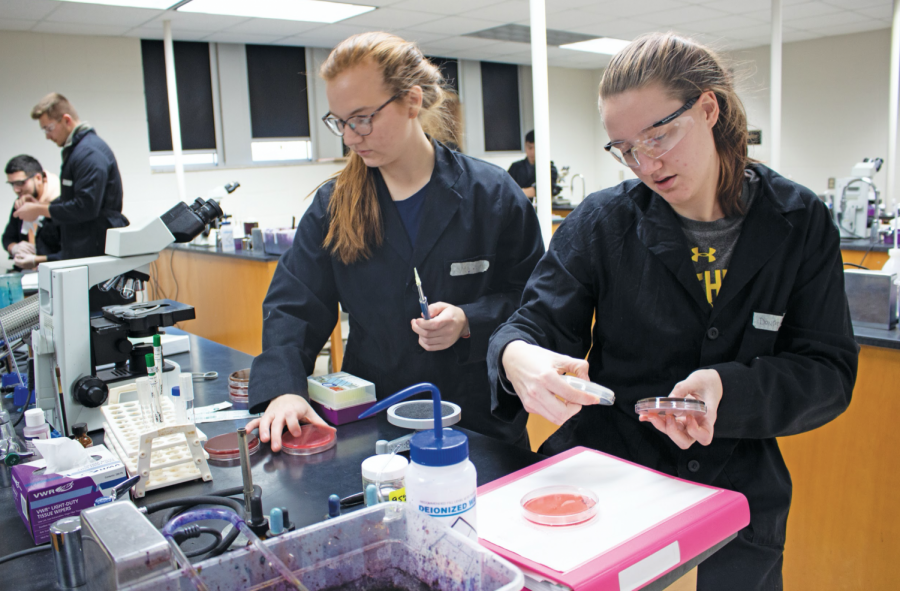 UW Oshkosh science students are digging for answers in bacteriology class in order to address the issue of diminishing antibiotics and antibiotic-resistant superbugs.

With the help of Tiny Earth, a program designed to aid in the discovery of new antibiotics in the soil through student sourcing, students are now using their labs to conduct research for a real-world cause.

Rooted in UW Madison, Tiny Earth spans throughout 45 states and 15 countries according to tinyearth.wisc.edu. About 10,000 students are enrolled in courses with partnerships to Tiny Earth.

Eric Matson, a professor in the biology department at UWO, is the Partner Instructor for the bacteriology class at UWO that is partnering with Tiny Earth.

Matson explained that behaviors of clinicians and patients combined with evolving microorganisms has created a situation where infections are often not treatable with any known antibiotics.

According to Matson, Tiny Earth highlights the need to find new antibiotics which the microorganisms are not resistant to.

Matson said that while there are many other corporations screening for alternative antibiotics, Tiny Earth adds to the efforts by allowing students to conduct the “groundwork” of discovering possible antibacterial isolates.

The benefits to this system are twofold, as it accrues very little cost and comes with the added bonus of education for the students involved, according to Matson.

“The techniques being used are ones that provide fundamental skills in microbiology,” Matson said. “I think what’s new and what sparks excitement in the students is that they sense that there’s something applied and that they’re part of this larger program.”

“I try to make that clear, that it’s not just the effort in this one lab or one lab section, but rather this global effort that will ultimately potentially prove fruitful,” Matson said.

“Across the country there are hundreds of programs doing this and then that translates into thousands and thousands of specimens per semester that get screened for this.”

In the bacteriology lab at UWO, part of students’ testing consists of bringing in soil samples from a chosen location and testing for antibiotic-producing microbes.

Students use E. coli bacteria in petri dishes to test the resilience of the microbes they discover.
Pointing to a spot on a petri dish from a successful antibacterial microbe, Matson explained that the lack of growth in the bacterial strains on the petri dish indicates that the isolate was producing antibacterial substances.

“If, for example, something from the Tiny Earth isolate is impeding the growth of the E. coli, we’ll see it as a clear zone in the E. coli,” Matson said.

“It’s kind of cool to think that we or our lab might have an impact on somebody someday,” sophomore Shea Thull said. “People that are doing this could make a difference and we’re part of it so it’s cool.”

According to sophomore Daydre Basler, the class is more freely structured than other science classes.

“We’re told what to do from the beginning but we’re allowed to just go with it how we see fit. If we’re curious about something we can look into that more,” Basler said.

Sophomore Marko Quinones said “It’s kind of nice because we’re just gathering a lot of data and important information that could be used anywhere.”

Quinones said the lab tests contribute to learning skills for a future career.

“We’re doing tests that we’re eventually going to have to understand how to do later on in our field of work, so it’s a pretty important class,” Quinones said.