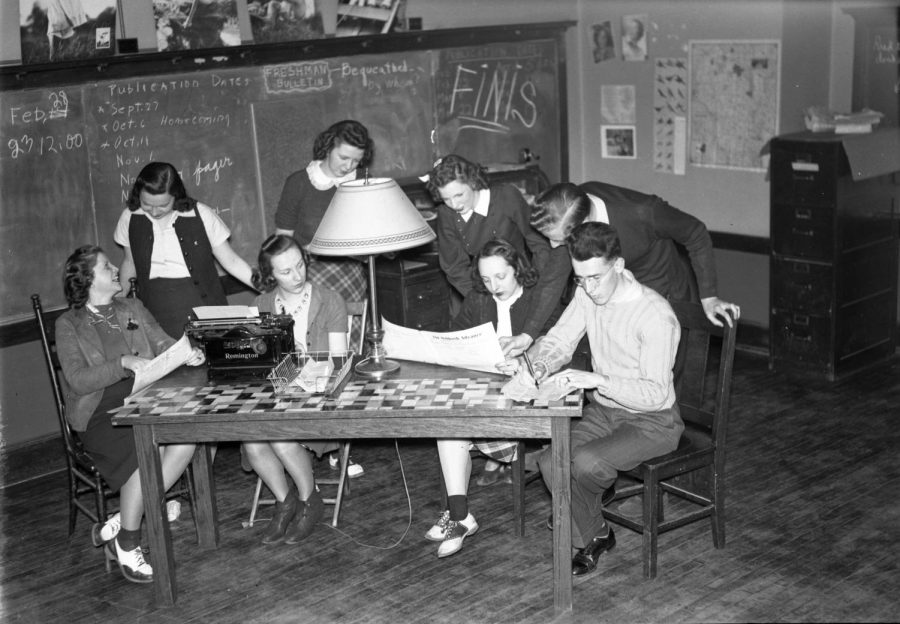 125 years ago, a publication was created on what is now the UW Oshkosh campus with the intention of bridging the gap between faculty and students.

The Normal Advance began publication in September 1894 and is celebrating its quasquicentennial anniversary in 2019. Despite the time that has elapsed and a few name changes, the publication continues to foster communication between students and faculty.

In the early days The Normal Advance wasn’t exactly a newspaper. It was a kind of literary magazine, printing speeches, debates, literary essays and various other musings.

In 1919, under the direction of faculty adviser Walter Fletcher, the publication became a full-on newspaper, incorporating headlines and coverage of sporting events.

At the time, UW Oshkosh was a teacher training institute, but Fletcher had a deep passion for teaching students the art of journalism.

“He thought that there were opportunities for teachers to learn about journalism so they could teach that style of writing,” university historian Joshua Ranger said of Fletcher’s legacy.

While Fletcher did make the paper more “newsy,” it was largely a newsletter and tool for those on campus to learn about events being held in the area.

The glory days
Everything changed in 1968 with the formation of a journalism major at UWO, which was then known as Wisconsin State University – Oshkosh. The paper transformed into a learning lab, a place for aspiring journalists to learn the tools of the trade.

One of the first major stories printed in the newly renamed Advance-Titan was its coverage of Black Thursday, a demonstration in which 94 African American students were expelled for protesting.

Because the A-T had so much time to prepare for the Black Thursday issue, the staff was better able to do a deep dive and report on the events following Black Thursday, Ranger said.

“They were very sympathetic to the issues that the black students were facing,” Ranger said. “This was the story of a lifetime, and they kept covering it throughout the year. It’s a really helpful resource when we interpret the history of Black Thursday.”

The paper hit its stride in the 1970s and became a pseudo voice of the counterculture. Ranger said the ‘70s were really when the paper began doing more investigations and became more critical of campus administration.

Ray Barrington, who was on the A-T staff from 1976-81, said the average work week for the staff at the time began on Mondays with an organizational meeting, where stories would be handed out to reporters.

On Tuesdays, reporters would go to events, conduct interviews and write their stories while the editors began planning what the physical paper would look like.

On Wednesdays, the editor-in-chief and the news editor would meet with the chancellor to talk about his upcoming plans. Wednesday nights were production nights.

Students typed their drafts on typewriters and they would be edited and retyped. The edited stories would then be entered into a video terminal, which would spit out paper tape. The paper tape would be fed into a typesetter machine, which would print the stories in newspaper columns.

Editors cut the columns and pasted them onto the page with hot wax. The pages were sent to Ripon Printers after being laid out, where they were turned into a metal plate to be printed.

Barrington said production nights would often last from 7 p.m. Wednesday to 7 a.m. Thursday.
On Thursdays, after the papers came back from Ripon, the staff handed out the issue on campus. On Fridays, the staff would hold a short meeting to critique the week’s issue.

Mary Bergin, who was on the A-T staff from 1973-77, said the staff really tried to reflect the student body.
“We were given a really loose leash because Dr. Lippert really believed in that,” Bergin said. “I never felt like we were restrained.”

Gary Coll, who was a journalism professor at UWO from 1969-2005, said the A-T owes its modern look to Lippert, adding that Lippert worked hard to ensure that the paper was independent.

“He was a very hands-off adviser, he didn’t direct the editorial content much at all,” Coll said. “And in fact, The Advance-Titan always seemed to be in some kind of trouble with somebody because they were independent and published things that were on students’ minds and not necessarily things that made everything look good.”

Coll said Lippert would act almost as legal counsel for the paper, helping get them out of legal trouble.

Mike Jacquart, who was on staff from 1984-86, said one of the best learning experiences he gained from working at the A-T was covering a city council meeting.

“It was an excellent learning experience into how city government works,” he said. “You got to cover more than just what was going on around campus.”

Dan Truttschel, who was on the A-T staff from 1989-93, said one of the major changes he saw was the conversion from a weekly paper to a biweekly paper.

“It was really difficult on a small campus with a staff that wasn’t making a lot of money,” he said. “It was an experiment that our editor wanted to try to leave our mark.”

The A-T in the 21st Century
Gale Hellpap, who was on staff from 2003-05, started as a reporter at the A-T and eventually worked her way up to assistant features editor. Hellpap said she made lifelong friends and memories at the A-T.

“I actually met my husband, Andrew, on staff. We both started at the A-T at the same time and now we’ve been together close to 16 years and have two little kids,” Hellpap said. “That’s probably the best thing to come out of my time at the A-T.”

“We didn’t realize what it was going to do to the field of communication,” she said.

Journalism professor Vincent Filak, who was the A-T faculty adviser from September 2009 to May 2018, saw how the introduction of social media affected student media firsthand.

Filak said large national advertisers such as Verizon, Apple or Comcast were the bread and butter of advertising in college newspapers.

“We couldn’t say anymore that we were the only people who can deliver you the student audience,” Filak said.
Despite the loss of national advertisers, the A-T marched on. During Filak’s tenure as adviser, the paper covered the scandal of Chancellor Richard Wells mismanaging UWO Foundation money.

“We just blew the doors off that thing,” Filak said. “The thing that made it interesting for us is that we were able to explain it more in a way that mattered to our audience.”

The A-T has given Filak memories that will last a lifetime, from a sports writer’s pants catching fire at the 2016 Football National Championship game to the abundance of Filak memes that remain on the A-T server to this day.

But the thing that Filak believes has made the paper stand the test of time are the people and the sense of family that forms down in the newsroom.

“It becomes a lot of things for a lot of people. For some people it’s a training ground to go off and become journalists in other places. For other people, it’s an opportunity to take part in something that’s bigger than themselves. And for some people it becomes kind of who they are as opposed to what they do,” Filak said. “Nobody who goes through it isn’t changed in some way, whether they want to admit it or not. And nobody who experiences that sense of family can think of it in any other way.”