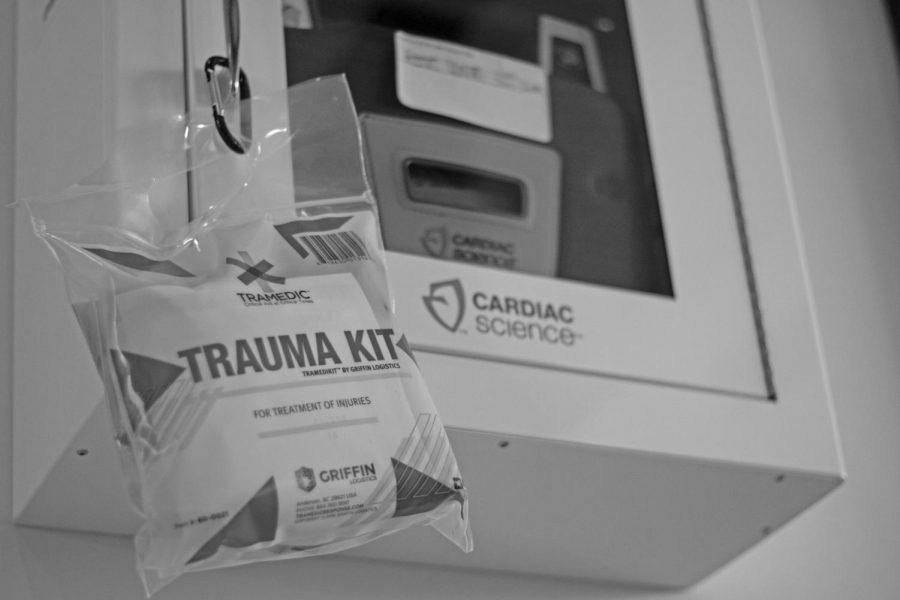 Stop the Bleed kits are attached to automated external defibrillators around the UWO campus.

Aurora Medical Center donated 30 “Stop the Bleed” kits to UW Oshkosh in an effort to increase safety on campus during emergency situations.

“These kits are designed to save lives when someone suffers a traumatic injury with major blood loss,” University Police Lt. Trent Martin said. “This could be from a gunshot wound, a major laceration or amputation of an extremity or anything that causes severe bleeding that would put someone’s life at risk.”

The kits include a tourniquet, a pair of scissors, gauze, quick clot, compression gauze, rubber gloves and bandaging, along with directions on how to use the materials within the kit.

Martin said in an active threat situation specifically, police are responding to stop the threat first to prevent further danger before aiding those in need, which sometimes can take several minutes.

Martin said those who suffer major blood loss may perish in less than a few minutes.

“If our community has these kits out there and available to them, the probability of lives being saved increases substantially,” Martin said.

The kits are attached to automated external defibrillators located within buildings that have the heaviest foot traffic as well as venues that host large events such as Reeve Memorial Union, Kolf Sports Center and the Culver Family Welcome Center.

Stop the Bleed originated after the Sandy Hook Elementary School shooting in Newtown, CT in mid-December 2012.

Surgeon and Regent of the American College of Surgeons Lenworth M. Jacobs, Jr. requested to review the victims’ autopsy records, according to the Stop the Bleed website.

“Results showed that the victims died from severe bleeding,” The website said. “Severe bleeding, that if controlled, could have probably kept them from going into shock until emergency help arrived on scene.”

This led trauma surgeons from ACS to form a group with other experts in the fields of emergency medical care, government and law enforcement to develop recommendations on how to improve the rate of survival for people with severe bleeding.

“The nice part about Stop the Bleed is that it can be used for any type of life threatening bleeding,” Tracy Miller, Aurora Medical Center emergency preparedness coordinator, told UWO Today. “It doesn’t just have to be used in active threat situations.”

“These kits are just one facet of our entire safety plan,” Martin said. “We want to offer as many resources as possible to prepare our community for any major traumatic incident. These kits put tools out there that will save lives if they ever needed to be used.”

The UP will host an open forum Feb. 24 in Reeve 220 for any students, faculty or staff that want to learn more about the kits and how they are used.