Sleep insufficiency may cause harm to college students 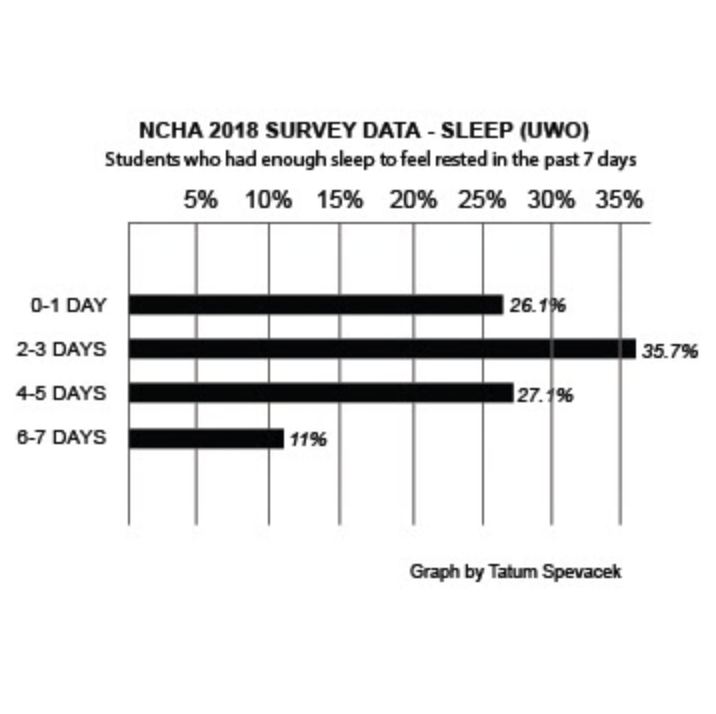 Some college students may take sleeping for granted, but for others, getting the recommended seven to nine hours of sleep per night is difficult to achieve due to sleep insufficiency. Through the darkness, though, lies some bright, healthy and enlightening benefits to getting the proper amount of sleep.

According to a spring 2018 UW Oshkosh comprehensive health and wellness assessment done once every three years, 51.3% of students assessed felt tired, dragged out or sleepy during the day three to five days per week.

A 2020 Wolters Kluwer study finds that students may be struggling with sleep insufficiency, which is when a person does not get enough restful sleep.

“People with sleep insufficiency would be able to sleep if they had the chance,” the study said. “Usually, there are things outside their control keeping them from getting restful sleep.”

Juliana Kahrs, assistant director of health promotion, said that getting the proper amount of sleep most nights can have some major perks.

“Sleep helps to restore energy, fight off illness and repair your nerves,” Kahrs said. “This is the time when memory and consolidation happens, so especially for students who are trying to learn and retain information for their classes, sleep is very important.”

She adds that sleeping helps maintain a strong and healthy body.

“Sleep isn’t just a passive activity; it is a very active process when our body is recharging and repairing nerves, muscles, all the systems that keep us running on a daily basis.”

Kahrs referenced a large research study focused on the risk factors that may contribute to poor sleep among college students.

“What students reported as being their top barriers to sufficient sleep were technology, inconsistent daily schedules and substance use — including alcohol, which disrupts deep sleep, caffeine and other drugs.”

The study also states that smoking or not eating enough during the evening hours can contribute to a night without much sleep.

Not getting enough sleep as a college student can also trigger mental health disorders such as anxiety and depression.

“It can exacerbate those issues when people already have them,” Kahrs said. “Getting enough sleep improves emotional regulation, mood, your ability to remember or recall information and concentrate. These are all really important things for college students.”

Kahrs said that getting the proper, high-quality amount of sleep most nights lies in three fixable standards: light, noise and temperature.

“Your circadian rhythm begins in the morning hours and you want to expose yourself to as much natural light as possible,” Kahrs said. “Toward the end of the day, or within several hours of resting or sleep, you want to try to mitigate a lot of that light. So it might be having blue light filters on your screens, your phone or your glasses.”
When it comes to temperature, a good number to keep the thermostat at is between 65 and 67 degrees.

“If you can’t control that kind of noise, you can create white noise or other types of restful noises that are constant so that it drowns out whatever those disruptful noises are.”

She explained the importance of one’s circadian rhythm, especially as a college student.

“It’s your body’s clock,” Kahrs said. “You get a lot of adrenaline and cortisol pumping [in the morning]. About five to six or seven hours after you wake up, there is typically a dip in the cortisol and an increase in melatonin in your body, so you’re naturally more tired. For a lot of people, that’s the afternoon slump feeling. That’s totally natural. If you’re going to take a nap in a day, that’s a good time to do it.”

The study lists numerous additional treatments that can help with sleep insufficiency, such as going to bed and waking up at the same time every day, having caffeinated beverages only in the morning and solving any stressful or worrisome problems before going to bed.

Avoiding alcoholic beverages in the afternoon and evening is also mentioned in the study.

The study also refers to relaxation therapy, which is the process of “relaxing all the muscles in your body one by one.”

“Beginning with the muscles in your face, squeeze (contract) your muscles gently for one to two seconds and then relax. Repeat several times,” the study states. “Use the same technique for other muscle groups: jaw and neck, shoulders, upper arms, lower arms, fingers, chest, abdomen, buttocks, thighs, calves and feet.”
“This relaxation program can promote restfulness and sleep,” the study says.

Kahrs is actively working on an individualized sleep education program that will be available through Health Promotion Services starting in the fall semester.

The sleep education program is a four to six week individualized plan for students, which will include weekly progress meetings with a health educator.

“If you can’t get more than six hours of sleep in a night, you want to make sure you’re making the most of those six hours,” Kahrs said.

You can find more articles about sleep wellness at uwosh.campuswell.com.