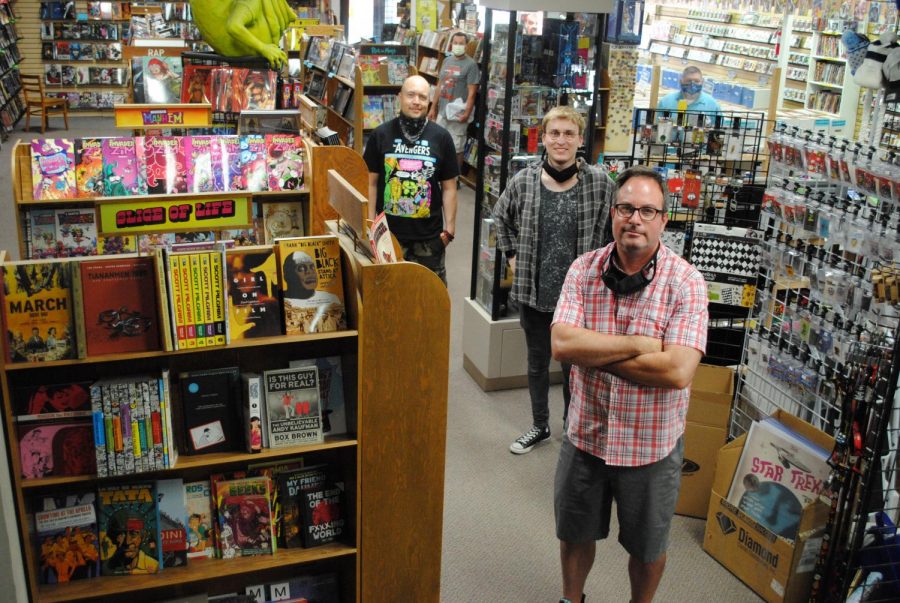 Joseph Schulz / The Advance-Titan — Celebrating 25 years of House of Heroes Comics and Games are, from left, Kevin Kimmes, Tripper Pech and Scott Dercks.

Scott Dercks has loved comic books most of his life and has spent the last 25 years sharing that passion with the Oshkosh community.

He owns House of Heroes Comics and Games on Main Street, which has become a hub for geek culture in the middle of downtown.

Before becoming a business owner, Dercks grew up in Kaukauna, which is where he discovered comic books.

“When I was a kid, there was The Electric Company show on TV and they had ‘Spider-Man’ on, so that might’ve been where it started,” he said. “As long as I can remember, I was reading comic books. I don’t know a life without it.”

At that time, there were very few comic book stores in the area as comics were mostly sold on news racks in convenience and grocery stores, which now carry magazines and other impulse items.

Dercks recalled one time when he was about 10 years old, he went to the Valley Fair Shopping Center in Appleton and explored an early comic bookstore. When he returned to the mall the next year, however, the store had closed.

He collected comics until he was about 12, deciding comics were for kids and that he was “too old for that.”

So, Dercks put the hobby aside for a few years. After graduating from high school, he went to college for about a year before deciding to leave.

Around that time, Dercks met Bob Larson, who owned Power House Comics in Appleton. A friend took him to the store once, and afterward Dercks was “addicted to comics” once again.

But the medium had changed. The stories being told now featured more adult themes and subject matter.

Titles such as Alan Moore’s “Watchmen,” “V for Vendetta” and “The Killing Joke,” as well as Frank Miller’s “Dark Knight Returns” or Neil Gaiman’s “Sandman,” pushed the boundaries of what was acceptable to print in comic books.

“All of those things weren’t kid’s books; they were more geared toward adults and that’s what I was into at the time and what got me back into comics,” Dercks said.

After spending a few months shopping at Power House Comics, Dercks eventually got a job there in 1991.

Four years later, Dercks and Larson saw a void in Oshkosh, as a previous comic bookstore had closed in ‘93.

On Sept. 11, 1995, House of Heroes Comics and Games opened in downtown Oshkosh, offering comic books and Magic: The Gathering cards.

“The cool thing about the shop is that it’s always changing and it’s always evolving — it’s not just a comic book shop,” Dercks said.

During his time at the shop, Dercks has seen geek culture transform from something on the fringes of society to a predominant part of the public psyche.

He attributes the massive rise in popularity of comic book properties to successful adaptations into other media, including “The Dark Knight,” “The Walking Dead” and the smorgasbord of Marvel movies.

Even so, he says adaptations don’t always directly translate into comic book sales. For example, the “Iron Man” movies didn’t create an uptick in sales of its comics.

However, for properties that are more self-contained, such as “The Walking Dead” and “Umbrella Academy,” Dercks says adaptations have translated into sales.

Eight years ago, Larson retired and Dercks purchased House of Heroes. In fact, Dercks and Lee Marohn are the only employees that have stayed since opening 25 years ago.

In that time, the store has overcome adversity, weathering economic downturns spurred by 9/11, the Great Recession and, most recently, the coronavirus pandemic.

To service customers during the statewide stay-at-home order, House of Heroes stayed afloat by selling comic collections via auctions on Facebook and eBay.

Dercks had initially planned on hosting a 25th anniversary celebration at the shop, but he says those plans are on hold until COVID-19 is more under control.

Even so, he added that it’s been rewarding to build relationships with customers through pop culture.

“It’s always fun when I’m out at a bar or something and a kid who used to buy Pokémon cards at the shop says hi and he’s 30 now,” Dercks said.

In terms of the future of House of Heroes, Dercks is looking forward to seeing the store continue to evolve as demand shifts.

“I really don’t know what to expect and that’s the thing that makes it fun — it’s always changing,” Dercks said. “As a small business owner, you’re rolling with the punches; that’s part of the deal.”