How did Oshkosh vote in the election? 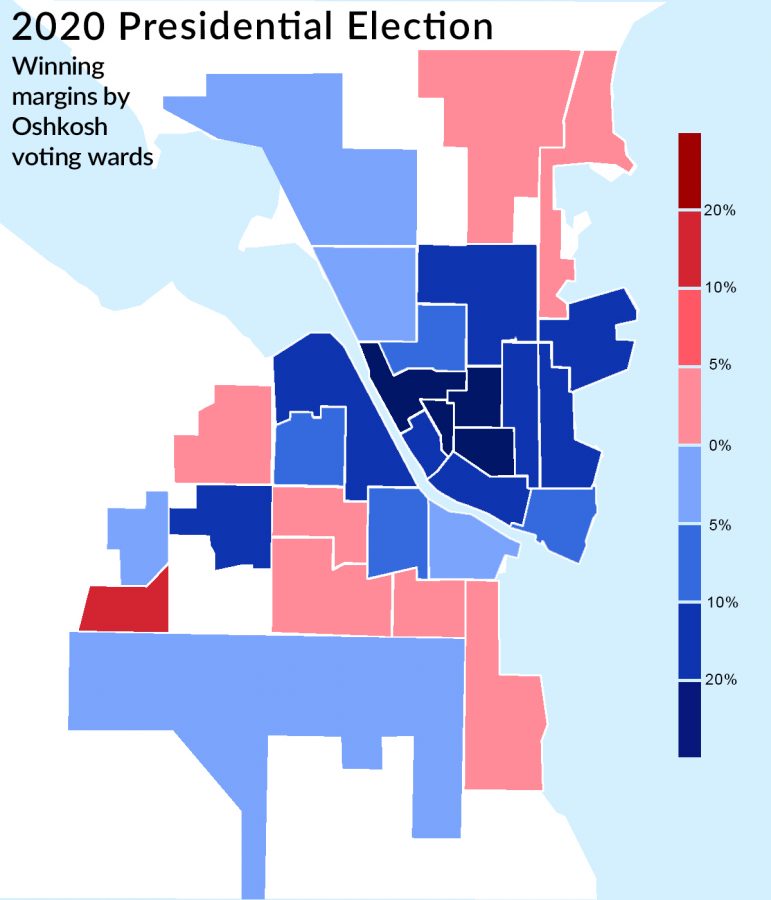 While Republicans won almost every race on the ballot, Oshkosh constituents voted Democratic on all contested races apart from one.

A majority of Oshkosh voting wards leaned heavily blue in the presidential race, giving Joe Biden over a 10% winning advantage in a number of districts.

Biden defeated President Donald Trump in Oshkosh by over 2,700 votes, opposed to Winnebago County, where Trump won around 53% of the total votes.

Few Oshkosh wards leaned heavily in favor of Trump in this general election; in most wards, Trump only flipped the district by little over 1% of the vote.

Oshkosh’s most populated voting districts located around the university leaned heavily toward Biden, giving him an over 20% winning margin in four districts.

The rural, urban divide between Oshkosh’s vote and the rest of the county’s is matched on the local and state elections as well.

This year saw a sweep of incumbent victories for all state and local positions on the ballot.
Republican candidates won all but one race on the Oshkosh ballot, continuing their red wave from the last general election.

But while Republicans won the elections, Oshkosh voters elected all Democrats in every red/blue race on the ballot.

Grothman has served as the area’s congressional representative since 2014.

While Grothman won the election, former state senator Democrat Jessica King beat out the incumbent by over 3,000 votes in Oshkosh.

However, Feyen didn’t beat the democratic candidate in our city. Wojciechowski managed to top Feyen by a narrow margin of just over 600 votes in the city of Oshkosh.

Hintz has served as the representative for the 54th district of the state legislature since 2006.

Hintz managed to overcome political newcomer, Republican Don Herman, with around 54% of the votes.

The 54th assembly district covers the boundaries of the city of Oshkosh, which coupled with Hintz’s incumbent status, is likely the reason he’s the only blue winner from the ballot given Oshkosh’s voting trends this year.

Republican Mary Krueger won her sixth reelection as county treasurer this year and has served the position for the past 20 years.

The register of deeds was the only Republican win in a contested race this year. Republican incumbent Natalie Strohmeyer beat political newcomer, Independent Seth Reid. Strohmeyer received just over 55% of the Oshkosh vote, but won by a larger margin on the county level, getting 62% of all votes.