‘Justice is not just Chauvin’s conviction, justice would be George Floyd being alive’ 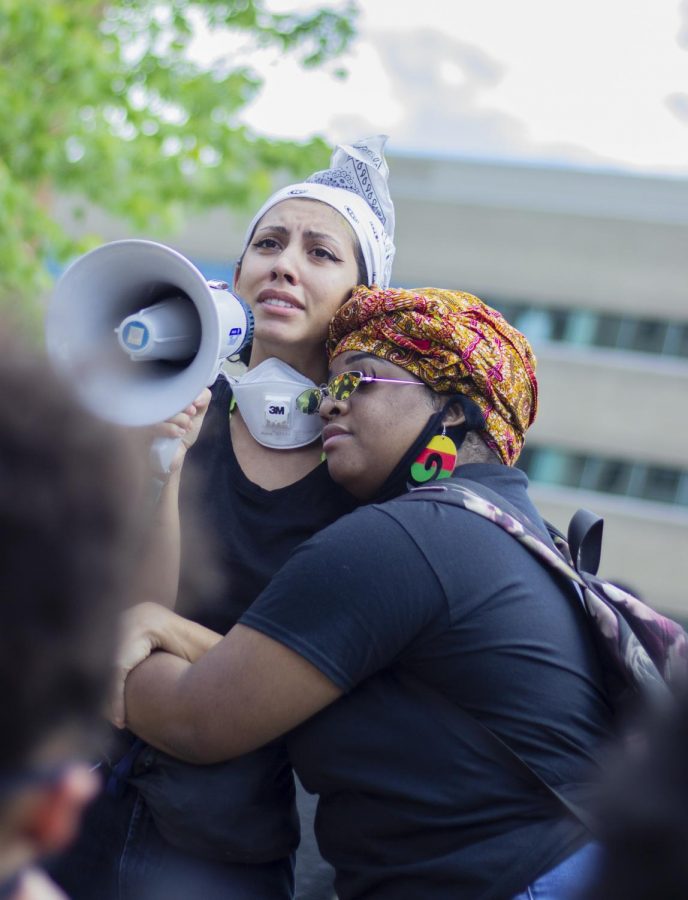 Carter Uslabar / Advance-Titan Cassandra Ross, right, embraces a protester overcome with emotion at an Appleton Black Lives Matter protest in May 2020 following the murder of George Floyd at the hands of former Minneapolis police officer Derek Chauvin. Ross organized the Appleton protest, which marched down College Avenue before ending peacefully in Houdini Plaza and the intersections of Oneida Street and College Avenue.

Chauvin, who last May held a knee down on George Floyd’s neck for more than nine minutes, was found guilty of second-degree unintentional murder, third-degree murder and second-degree manslaughter on Tuesday.

“To many, the verdict delivers justice,” UW Oshkosh chancellor Andrew Leavitt said. “Yet we know it does not change the fact that systemic racism exists in our country, our communities and even this institution.”

Leavitt said the community and university needs to work on addressing and fighting the racism around us every day.
“Dismissing acts of racism is a form of violence and hurts some in our community by traumatizing and reminding us of hate and bias unseen and unaddressed,” he said.

Oshkosh’s state assembly representative Gordon Hintz said he was encouraged that the jury found Chauvin guilty, but it doesn’t change the fact that Floyd should be alive today.

“It does not erase the loss for those who knew him and the trauma for those for whom his death hits close to home,” he said.

Hintz said local government leaders need to work to reform the systems that perpetuate violence against people of color.

“These problems have not gone away, and leaders at all levels have a duty to respond,” he said.

CAW’s executive director Robert Kraig said in a statement that this verdict should only be the start of police reform.

“The downside is that the verdict required singling out one police officer while giving cover to the police department in Minneapolis for the responsibility of a structurally racist system that does not truly respect Black life,” he said.

Kraig said we must start unwinding the current systems of policing and mass incarceration and replace it with a system that promotes safety for Black and Brown communities.

“This verdict does not change what we know to be true: the deadly official violence aimed at Black people in America will not end until we uproot the whole system,” he said.

“But we also know that justice is not just Chauvin’s conviction, justice would be George Floyd being alive,” he said.